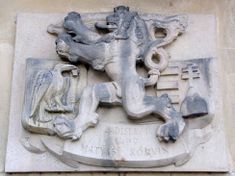 Plaque of Peace of Olomouc in 1479 between Ladislaus Jagiellon and Matthias Corvinus.

The Peace of Olomouc was signed on April 2, 1479 between Matthias Corvinus of Hungary and King Vladislaus II of Bohemia (and Hungary, later), bringing the Bohemian War (1468-1478) to an end. On July 21, 1479, the agreement was ratified during the course of festivities in Olomouc. This treaty, overall, ratified all terms within the Treaty of Brno developed in March 1478 (with slight modifications made by the King of Hungary on September 20, 1478). Based on the terms of the treaty, Vladislaus would cede the territories of Moravia, Silesia, and Lusatia to Corvinus. If Matthias perished, then Vladislaus was permitted to redeem these lands for 400,000 florins. Moreover, both monarchs would be permitted to utilize the title King of Bohemia. However, only Matthias was required to address the other claimant as the King of Bohemia.[1]