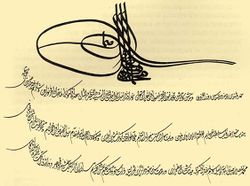 The Peace of Vasvár (Turkish version)

The Peace of Vasvár was a treaty between the Austrian Habsburg Monarchy and the Ottoman Empire which followed the Battle of Saint Gotthard of 1 August 1664 (near Mogersdorf, Burgenland), and concluded the Austro-Turkish War (1663-1664). It held for about 20 years, until 1683, during which border skirmishing escalated to a full-scale war and culminated with the Ottoman's siege of Vienna for the second time.

At the time of signing, the Habsburg monarchy was in a better position than the Ottoman military-wise. Instead of maintaining initiative and momentum, negotiations began, fighting stopped and peace was signed. In fact, Leopold I, Holy Roman Emperor wanted to conclude a peace in order to be better prepared against France.[1] But the factions within the Monarchy insisted on further operations, particularly Croats and Hungarians, mainly because most of their territory was in Ottoman hands so they wanted to use the opportunity to reclaim their land. The noble Croatian families Zrinski and Frankopan viewed the treaty as particularly supplicating to the Ottomans, with them actually having to give the territories that had just been liberated back to the Ottomans as terms of the treaty, some of which belonged to them before occupation. This caused internal strife and instability in the Monarchy which would eventually culminate with the rebellion of the two Croatian noble families and Hungarian nobles led by Ferenc Rákóczi I against the king of Hungary (also Emperor to the German states in the monarchy).

With this peace treaty, Ottoman control of Transylvania and Uyvar (administered as the Uyvar Eyalet of the Empire) was recognized, as well as both empires paying a financial tribute (presented as a "gift") to the other.[2] This was the only time the French king, a traditional ally of the Ottomans since king Francis I of France fought against them. It was, also, one of the major factors in the Habsburgs' decision, as the much more valuable estates in the Holy Roman Empire and Italy were threatened by France. The treaty was far from disadvantageous for the Austrians, as against minor concessions, it freed the hands of the Emperor who could now turn to Western affairs. It also gave some economic rights in the Ottoman realm to the Imperials.