The Peace of Westphalia (German: Westfälischer Friede) was a series of peace treaties signed between May and October 1648 in the Westphalian cities of Osnabrück and Münster, effectively ending the European wars of religion. These treaties ended the Thirty Years' War (1618–1648) in the Holy Roman Empire, and the Eighty Years' War (1568–1648) between Spain and the Dutch Republic, with Spain formally recognizing the independence of the Dutch Republic.

The peace negotiations involved a total of 109 delegations representing European powers, including Holy Roman Emperor Ferdinand III, Philip IV of Spain, the Kingdom of France, the Swedish Empire, the Dutch Republic, the Princes of the Holy Roman Empire and sovereigns of the free imperial cities. The treaties that constituted the peace settlement were:

The treaties did not restore peace throughout Europe, but they did create a basis for national self-determination.

The Peace of Westphalia established the precedent of peaces established by diplomatic congress,[4][5] and a new system of political order in central Europe, later called Westphalian sovereignty, based upon the concept of co-existing sovereign states. Inter-state aggression was to be held in check by a balance of power. A norm was established against interference in another state's domestic affairs. As European influence spread across the globe, these Westphalian principles, especially the concept of sovereign states, became central to international law and to the prevailing world order.[6]

Peace negotiations between France and the Habsburgs, provided by the Holy Roman Emperor and the Spanish King, were started in Cologne in 1641. These negotiations were initially blocked by France. 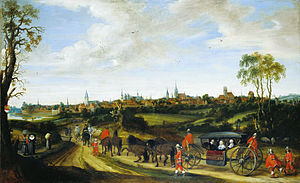 The Holy Roman Empire and Sweden declared the preparations of Cologne and the Treaty of Hamburg to be preliminaries of an overall peace agreement. This larger agreement was negotiated in Westphalia, in the neighbouring cities of Münster and Osnabrück. Both cities were maintained as neutral and demilitarized zones for the negotiations. Münster was, since its re-Catholization in 1535, a strictly mono-denominational community. It housed the Chapter of the Prince-Bishopric of Münster. Only Roman Catholic worship was permitted. No places of worship were provided for Calvinists and Lutherans.

Osnabrück was a bidenominational Lutheran and Catholic city, with two Lutheran and two Catholic churches for its mostly Lutheran burghers and exclusively Lutheran city council and the Catholic Chapter of the Prince-Bishopric of Osnabrück with pertaining other clergy and also other Catholic inhabitants. In the years of 1628–1633 Osnabrück had been subjugated by troops of the Catholic League. The Catholic Prince-Bishop Franz Wilhelm, Count of Wartenberg then imposed the Counter-Reformation onto the city with many Lutheran burgher families being exiled. While under Swedish occupation Osnabrücks's Catholics were not expelled, but the city severely suffered from Swedish war contributions. Therefore, Osnabrück hoped for a great relief becoming neutralised and demilitarised.

Both cities strove for more autonomy, aspiring to become Free Imperial Cities, so they welcomed the neutrality imposed by the peace negotiations, and the prohibition of all political influence by the warring parties including their overlords, the prince-bishops.

The peace negotiations had no exact beginning and ending, because the participating total of 109 delegations never met in a plenary session, but arrived between 1643 and 1646 and left between 1647 and 1649. Between January 1646 and July 1647 probably the largest number of diplomats were present. Delegations had been sent by 16 European states, sixty-six Imperial States, representing the interests of a total of 140 involved Imperial States, and 27 interest groups, representing the interests of a variety of a total of 38 groups.[9] 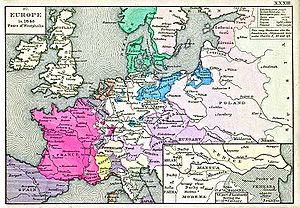 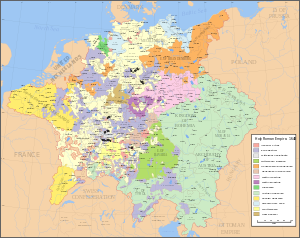 The power taken by Ferdinand III in contravention of the Holy Roman Empire's constitution was stripped and returned to the rulers of the Imperial States. This rectification allowed the rulers of the Imperial States to decide their religious worship independently. Protestants and Catholics were redefined as equal before the law, and Calvinism was given legal recognition.[11][12] Independence of the Dutch Republic also provided a safe country for European Jews.[13]

The Holy See was very displeased at the settlement, with Pope Innocent X in Zelo Domus Dei[14] reportedly calling it "null, void, invalid, iniquitous, unjust, damnable, reprobate, inane, empty of meaning and effect for all time".[15]

The main tenets of the Peace of Westphalia were:

There were also territorial adjustments:

The treaty did not entirely end conflicts arising out of the Thirty Years' War. Fighting continued between France and Spain until the Treaty of the Pyrenees in 1659. The Dutch-Portuguese War had started during the Spanish occupation of Portugal, as part of the Eighty Years' War, but went on till 1663. Nevertheless, it did settle many outstanding European issues of the time. Some of the principles developed at Westphalia, especially those relating to respecting the boundaries of sovereign states and non-interference in their domestic affairs, became central to the world order that developed over the following centuries, and remain in effect today. In several parts of the world, however, sovereign states emerged from what was once imperial territory only after the post-World War II period of decolonization.[6] More significantly, one of major principles—the balance of power—was undermined in the Twentieth century. Referring to the Soviet Union, Adolf Hitler said: Without Wehrmacht, a “wave would have swept over Europe that would have taken no care of the ridiculous British idea of the balance of power in Europe in all its banality and stupid tradition—once and for all.”[22] During World War II, the multipolar balance became bipolar, between the Axis and the Allies, followed by the United States and NATO nations against the Soviet Union and Warsaw Pact nations during the Cold War. (1967: 332) In his chapter entitled “The New Balance of Power,” Hans Morgenthau opened with the words:

The destruction of that intellectual and moral consensus which restrained the struggle for power for almost three centuries deprived the balance of power of its vital energy that made it a living principle of international politics … The most obvious of these structural changes which impairs the operation of the balance of power is to be found in the drastic numerical reduction of the players in the game.”[23]

After the fall of the Soviet Union, power was seen as unipolar with the United States in absolute control,[24][25][26] though nuclear proliferation and the rise of Japan, the European Union, the Middle East, China, and a resurgent Russia have begun to recreate a multipolar political environment.[27][28] Instead of a traditional balance of power, inter-state aggression may now be checked by the preponderance of power,[29] a sharp contrast to the Westphalian principle.