Pema Chödrön (born Deirdre Blomfield-Brown on July 14, 1936) is an American, Tibetan Buddhist. She is an ordained nun, acharya and disciple of Chögyam Trungpa Rinpoche.[1][2] Chodron has written several books and is the director of the Gampo Abbey in Nova Scotia, Canada.[3][2]

Chödrön was born Deirdre Blomfield-Brown in 1936 in New York City.[4][1] She attended Miss Porter's School in Farmington, Connecticut and grew up on a New Jersey farm with an older brother and sister.[4][5] She obtained a bachelor’s degree in English literature and a master’s in elementary education from the University of California, Berkeley.[1] 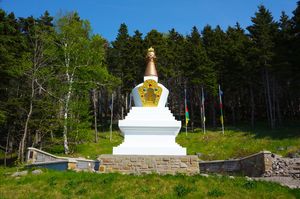 Chödrön began studying with Lama Chime Rinpoche during frequent trips to London over a period of several years.[1] While in the US she studied with Trungpa Rinpoche in San Francisco.[1] In 1974, she became a novice Buddhist nun under Rangjung Rigpe Dorje the sixteenth Gyalwa Karmapa.[1][6] In Hong Kong in 1981 she became the first American in the Vajrayana tradition to became a fully ordained nun or bhikṣuṇī.[5][7][8]

Trungpa appointed Chödrön director of the Boulder Shambhala Center (Boulder Dharmadhatu) in Colorado in the early 1980s.[9] Chödrön moved to Gampo Abbey in 1984, the first Tibetan Buddhist monastery in North America for Western men and women, and became its first director in 1986.[3] Chodron's first book, The Wisdom of No Escape, was published in 1991.[1] Then, In 1993, she was given the title of acharya when Trungpa's son, Sakyong Mipham Rinpoche, assumed leadership of his father's Shambhala lineage.[citation needed]

In 1994, she became ill with chronic fatigue syndrome but gradually her health improved. During this period, she met Dzigar Kongtrul Rinpoche and took him as her teacher.[1] That year she published her second book, Start Where You Are[1] and in 1997 her book, When Things Fall Apart. [1] No Time to Lose, a commentary on Shantideva's Guide to the Bodhisattva's Way of Life, was published in 2005.[citation needed] That year, Chödrön became a member of The Committee of Western Bhikshunis[10] Her most recent book, Practicing Peace in Times of War, came out in 2006.[citation needed]

Chödrön teaches the traditional "Yarne"[11]) retreat at Gampo Abbey each winter and the Guide to the Bodhisattva's Way of Life in Berkeley each summer.[4] A central theme of her teaching is the principle of "shenpa", or "attachment", which she interprets as the moment one is hooked into a cycle of habitual negative or self-destructive thoughts and actions. According to Chödrön, this occurs when something in the present stimulates a reaction to a past experience.[4] 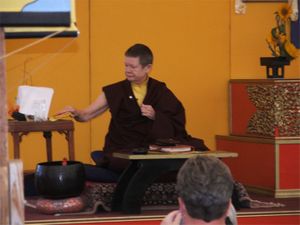 Pema Chödrön giving talk from her book No Time to Lose, 2005

Chodron married at age 21 and had two children but got divorced in her mid-twenties.[1] She remarried and then divorced a second time eight years later.[1] According to Chödrön she has three grandchildren who live in the San Francisco Bay Area.[12]