The People's Liberation Army Air Force (PLAAF) is the aerial warfare service branch of the People's Liberation Army, the armed forces of the People's Republic of China. The PLAAF was officially established on 11 November 1949. As of 2014, the PLAAF has a strength of around 398,000 personnel[2][3] and is the largest air force in Asia. With ongoing modernisation, all older aircraft types in service are quickly being phased out and emphasis being placed on developing modern 4.5th generation fighters to replace them - along with 5th generation fighters in the near future.

Main articles: History of the People's Liberation Army and Military history of China before 1911

Korean War to the Sino-Soviet Split

The PLAAF was founded with Soviet assistance on November 11, 1949,[4][5] shortly after the formation of the People's Republic of China. The PLA had operated few aircraft before that. The PLA's first organized air unit, the Nanyuan Flying Group, was formed only in the summer of 1949 from about 40 ex-Nationalist aircraft; its task was to defend Beijing, the nation's new capital.

The PLAAF fought the Korean War in Soviet-built MiG-15, known as the J-2 in Chinese service, with training from Soviet instructors. The war also brought Soviet assistance for the indigenous aircraft industry. The Shenyang Aircraft Factory built the two-seat MiG-15UTI trainer as the JJ-2,[6] and during the war manufactured various components to maintain the Soviet-built fighters. This prepared them to mass-produce derivatives of Soviet aircraft under license, starting with the J-5 (MiG-17) in 1956,[7] then the J-6 (MiG-19) in 1959,[8] and then the J-7 (MiG-21) in 1967.[9]

The 1960s were a difficult time for the PLAAF. The withdrawal of Soviet aid due to the Sino-Soviet split, and the prioritization of the missile and nuclear weapon programs, caused the industry to markedly decline through 1963. A recovery began around 1965 as J-2s, J-5s, and some J-6s were provided to North Vietnam during the Vietnam War. Development of the J-8, China's first indigenous fighter, was also initiated during the 1960s.

The PLA Air Force underwent reorganization and streamlining as part of the reduction in force begun in 1985. Before the 1985 reorganization, the Air Force reportedly had four branches: air defense, ground attack, bombing, and independent air regiments.[10] In peacetime the Air Force Directorate, under the supervision of the PLA General Staff Department, controlled the Air Force through air army headquarters located with, or in communication with, each of the seven military region headquarters. In war, control of the Air Force probably reverted to the regional commanders. In 1987 it was not clear how the reorganization and the incorporation of air support elements into the group armies affected air force organization. The largest Air Force organizational unit was the division, which consisted of 17,000 personnel in three regiments. A typical air defense regiment had three squadrons of three flights; each flight had three or four aircraft. The Air Force also had 220,000 air defense personnel who controlled about 100 surface-to-air missile sites and over 16,000 antiaircraft guns. In addition, it had a large number of early-warning, ground-control-intercept, and air-base radars manned by specialized troops organized into at least twenty-two independent regiments.

In the 1980s the Air Force made serious efforts to raise the educational level and improve the training of its pilots. Superannuated pilots were retired or assigned to other duties. All new pilots were at least middle-school graduates. The time it took to train a qualified pilot capable of performing combat missions reportedly was reduced from four or five years to two years. Training emphasized raising technical and tactical skills in individual pilots and participation in combined-arms operations. Flight safety also increased.

In 1987 the Air Force had serious technological deficiencies — especially when compared with its principal threat, the Soviet Union — and had many needs that it could not satisfy. It needed more advanced aircraft, better avionics, electronic countermeasures equipment, more powerful aircraft weaponry, a low-altitude surface-to-air missile, and better controlled antiaircraft artillery guns. Some progress was made in aircraft design with the incorporation of Western avionics into the F-7 (MiG-21) and F-8, the development of refueling capabilities for the B-6D bomber and the A-5 attack fighter, increased aircraft all-weather capabilities, and the production of the HQ-2J high-altitude surface-to-air missile and the C-601 air-to-ship missile.

Although the PLAAF received significant support from Western nations in the 1980s when China was seen as a counterweight to Soviet power, this support ended in 1989 as a result of the Chinese crackdown on the Tiananmen protests of 1989 and the later collapse of the Soviet Union in 1991. After the fall of the USSR, Russia became China's principal arms supplier to the effect that Chinese economic growth allowed Russia to sustain its aerospace industry. 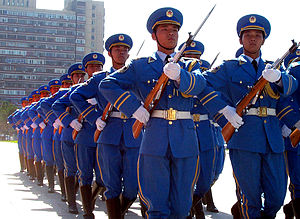 PLAAF airmen on parade during a full honors arrival ceremony in 2000.

In the late 1980s, the primary mission of the PLAAF was the defense of the mainland, and most aircraft were assigned to this role. A smaller number of ground attack and bomber units were assigned to Air interdiction and possibly close air support, and some bomber units could be used for nuclear delivery. The force had only limited military airlift and aerial reconnaissance capabilities.

In the early 1990s, the PLAAF began a program of modernization, motivated by the collapse of the Soviet Union, as well as the possibility of military conflict with the Republic of China and perhaps also involving the United States. This process began with the acquisition of Su-27s in the early 1990s and the development of various fourth-generation aircraft, including the domestic J-10, and the FC-1 . The PLAAF also strove to improve its pilot training and continued to retire obsolete aircraft. This resulted in a reduction of the overall number of aircraft in the PLAAF with a concurrent increase in quality of its air fleet.

The 21st century has seen the continuation of the modernization program with China's huge economic growth. It acquired 76 Su-30MKK's from 2000 to 2003, and 24 upgraded Su-30MK2's in 2004. It also produced around 200 J-11s from 2002 onwards and bought 3 batches (at a total of 76) of the Su-27SK/UBK. Production of the J-10 fighter began in 2002 with an estimated 200 aircraft in service currently. The PLAAF also began developing its own tanker aircraft, which it previously lacked, by modifying old H-6 bomber (Tupolev Tu-16). In 2005 it announced plans to buy approximately 30 IL-76 transport planes and 8 Il-78 tanker planes, which would greatly increase its troop airlift capability and offer extended range to many aircraft, though as of 2009 this deal is still on hold.

Predictions of the PLAAF's future aircraft fleet indicate that it will consist of large quantities of Chengdu J-10 and Shenyang J-11 as its main force, with J-16 and JH-7A as the PLAAF backbone precision strike fighters. Future stealth fighter projects such as the Chengdu J-20 will be inducted into the air fleet in small numbers, assigned to elite PLAAF selected pilots. The transport fleet will comprise Y-9 medium range transport aircraft, along with the Soviet Ilyushin Il-76, and domestic Y-20 heavy transport aircraft. Its helicopter fleet will comprise Z-20, Z-15 and Mi-17 troop transporters, and the WZ-10 attack helicopter for its ground forces. AWACS/AEW will be refined variants of existing service fleet of KJ-2000 and KJ-200, with UAV/UCAV in early stages of service in the PLAAF.

Senior Colonel Wu Guohui has said that the PLAAF is working on a stealth bomber, which some people have called the H-18.[11]

The markings of the PLAAF are a red star in front of a red band, it is very similar to the insignia of the Russian Air Force. The Red star contains the Chinese characters for eight and one,[13][14] representing August 1, 1927, the date of the formation of the PLA. PLAAF aircraft carry these markings on the fins as well.

The August 1st (aerobatic team) is the first PLAAF aerobatics team. It was formed in 1962. Aircraft inventory of PLAAF August 1st Aerobatic Team includes the J-10 and it has previously flown the JJ-5 and J-7. The Sky Wing and Red Falcon air demonstration teams, which operate Nanchang CJ-6 and Hongdu JL-8 respectively, were established in 2011.

See also: List of divisions of the People's Liberation Army 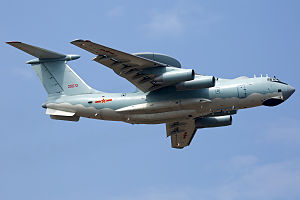 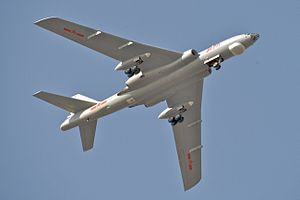 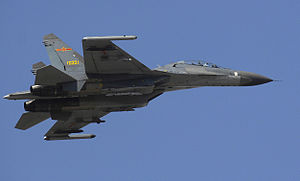 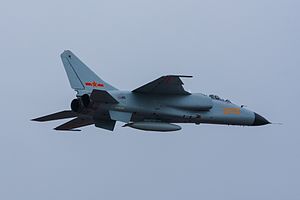 The Air Force headquarters consists of four departments: Command, Political, Logistic, and Equipment, which mirrors the four general departments of the PLA. Below the headquarters, Military region air forces (MRAF) direct divisions (Fighter, Attack, Bomber), which in turn direct regiments and squadrons.[15] The PLAAF typically used the system of threes in its organization at Division level and below, i.e. 3 Regiments per Division, 3 Squadrons per Regiment, and so on. The situation is now more fluid, with several divisions (the 5th, 15th, 24th for example) only having two regiments.[16] There are also Independent Regiments within the MRAFs. There is also an Airborne Corps (the 15th Airborne Corps) under direct control of PLAAF Headquarters.

There is presently over 150 air bases utilized by the People's Liberation Army Air Force, these are divided into seven military regions as follows:

The People's Liberation Army Air Force is undergoing a period of extensive modernization. Listed below are some of the more high profile aircraft under development. 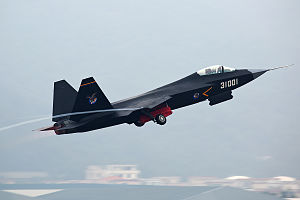