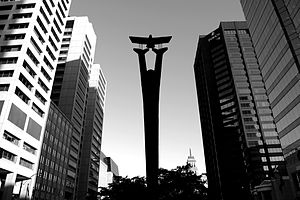 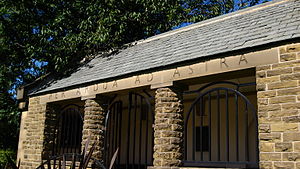 The motto carved into the shelter at Stonefall cemetery in Harrogate, which has Air Force graves from many Commonwealth air forces.

Per ardua ad astra ("Through adversity to the stars"[1] or "Through struggle to the stars"[2]) is the motto of the Royal Air Force and other Commonwealth air forces such as the RAAF, RCAF, RNZAF, and the SAAF. It dates from 1912 and was used by the newly formed Royal Flying Corps. 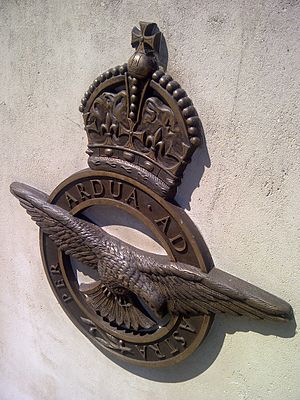 "Per ardua ad astra" badge on the Polish War Memorial 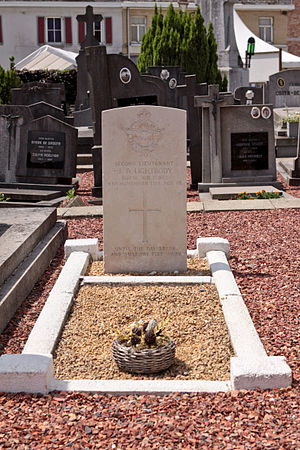 "Per ardua ad astra" on the headstone of Lieutenant J. D. Lightbody in Scheldewindeke, Belgium

The first Commanding Officer of the Royal Flying Corps (Military Wing) was Colonel Frederick Sykes. He asked his officers to come up with a motto for the new service; one which would produce a strong esprit de corps.

Not long after this, two junior officers were walking from the Officers' Mess at Farnborough to Cody's Shed on Laffan Plain. As they walked they discussed the problem of the motto and one of them, Lieutenant J. S. Yule, mentioned the phrase "Sic itur ad Astra", from Virgil. He then expanded on this with the phrase "Per Ardua ad Astra", which he translated as, "Through Struggles to the Stars". Colonel Sykes approved of this as the motto and forwarded it to the War Office. It was then submitted to the King, who approved its adoption.[3]

The question of where this motto had come from can be answered by the fact that Yule had read it in a book called The People of the Mist by Sir Henry Rider Haggard. In the first chapter was the passage: "To his right were two stately gates of iron fantastically wrought, supported by stone pillars on whose summit stood griffins of black marble embracing coats of arms and banners inscribed with the device 'Per Ardua ad Astra'".

Where Rider Haggard obtained this phrase is still unclear, although it is possible that it originated from the Irish family of Mulvany who had used it as their family motto for hundreds of years and translated it as "Through Struggles to the Stars".

The authoritative translation of the motto is just as uncertain as the source. Since there can be a number of different meanings to "Ardua" and "Astra", scholars[who?] have declared it to be untranslatable. To the Royal Air Force and the other Commonwealth air forces, however, it will remain translated as "Through Adversity to the Stars".[4] Northview Aviation Ltd is the only known organisation that uses "Per Ardua ad Astra" in a tongue in cheek fashion due to its involvement in the VIP aircraft market, hence earning its revenue "through hard work to the stars"

The motto of the Royal Air Force Regiment omits the 'ad astra' part, becoming simply 'per ardua'. Conversely, the name for early home for the Air Ministry, Adastral House, is based only on 'ad astra' part.

Per ardua ad astra is also the motto of: