Group Captain Percy Charles "Pick" Pickard DSO & Two Bars, DFC (16 May 1915 – 18 February 1944) was a Royal Air Force bomber pilot and commander during the Second World War. He is best remembered by the public for his role in the 1941 wartime propaganda film Target for Tonight in which he featured as the pilot of 'F for Freddie'—a Wellington bomber of No. 149 Squadron. He was killed on Operation Jericho in 1944.

Pickard was born in Handsworth, Sheffield, in the West Riding of Yorkshire, England and was educated at Framlingham College.[1] Pickard was the son of the late P. C. Pickard and Mrs. Pickard. His sister was actress Helena Pickard, married to English actor Sir Cedric Hardwicke.[1]

Pickard received a short service commission into the Royal Air Force in January 1937,[2] which was made Permanent in November.[3] He served with a bomber squadron before being appointed personal assistant to the air officer commanding a training group at Cranwell in 1938. He participated in fighting over Norway, France and during the Dunkirk evacuation.[1] He was awarded the Distinguished Flying Cross (DFC) in July 1940 while serving as a flight lieutenant in a bomber squadron. He was promoted to squadron leader with No. 311 (Czechoslovak) Squadron and was awarded a Distinguished Service Order (DSO) in March 1941. In May 1942, as wing commander in charge of No. 51 Squadron, he was awarded a bar to the DSO in recognition of his leadership in Operation Biting (also known as the Bruneval raid) on 27 February 1942. In March 1943, while commanding No. 161 Squadron – which carried out operations in support of the SOE in occupied Europe – at RAF Tempsford he was awarded a second bar to the DSO for outstanding leadership ability and fine fighting qualities.[4] He was the first RAF officer in the Second World War to be awarded the DSO and two bars.[5] 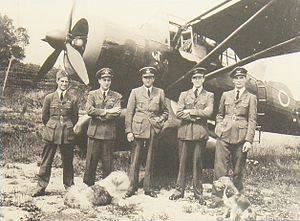 For a while Pickard was station commander at RAF Sculthorpe. In October 1943 he was given command of No. 140 Wing of the Second Tactical Air Force by Basil Embry. This put him in charge of three squadrons of de Havilland Mosquito fast bombers. They became specilised in low level precision attacks.[6]

Pickard led the February 1944 low-level attack on the Amiens Prison, in the raid known as Operation Jericho. The attack was carried out at the request of the French resistance in order to allow a considerable number of their imprisoned members, who were soon to be executed by the occupying Nazis, the chance to escape. The Resistance stated that the prisoners had said they would rather take the chance of being killed by RAF bombs than be shot by the Nazis. Operation Jericho was a success but Pickard, together with his Navigator, Flight Lieutenant J. A. "Bill" Broadley, were killed when their Mosquito, HX922/"EG-F", was shot down by a Fw 190 flown by Feldwebel Mayer of 7. Jagdgeschwader 26 in the closing stages of the operation. Pickard and Broadley were initially reported missing and then in September 1944 it was announced that they had been 'killed in action'.[1]

The French government called for him to receive a posthumous Victoria Cross.[8]