From Infogalactic: the planetary knowledge core
Jump to: navigation, search
This article is about a major city in Russia. For the hairstyle, see Perm (hairstyle). For other uses, see Perm (disambiguation).

Perm (Russian: Пермь; IPA: [pʲɛrmʲ];[13]) is a city and the administrative center of Perm Krai, Russia, located on the banks of the Kama River in the European part of Russia near the Ural Mountains.

The name Perm is of finno-ugric etymology, likely of Uralic (Komi or Veps) origin. Komi (Komi-Permyak: Перем, Perem; Komi: Перым, Perym) is a member of the Permic group of Fenno-Ugriche Uralic languages, which is also named for Perm. Likewise, the geologic period of the Permian takes its name from the toponym in Finnish or Vepsian language "Perämaa", means "Far away Land". 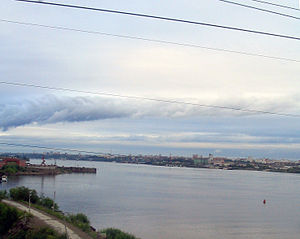 The Kama River near Perm

The city is located on the bank of the Kama River upon hilly terrain. The Kama is the main tributary of the Volga River and one of the deepest and most picturesque rivers of Russia. This river is the waterway which grants the Ural Mountains access to the White Sea, Baltic Sea, Sea of Azov, Black Sea, and Caspian Sea. The Kama divides the city into two parts: the central part and the right bank part. The city stretches for 70 kilometers (43 mi) along the Kama and 40 kilometers (25 mi) across it. The city street grid parallels the Kama River, traveling generally east-west, while other main streets run perpendicularly to those following the river. The grid pattern accommodates the hills of the city where it crosses them.

Another distinguishing feature of the city's relief is the large quantity of small rivers and brooks. The largest of them are the Mulyanka, the Yegoshikha, the Motovilikha (all are on the left bank of Kama River), and the Gayva (on the right bank).

Perm has a continental climate with warm summers and long, cold winters.

Perm is located in the old Perman area, which was originally inhabited by Finno-Ugric peoples. Perm was first mentioned as the village of Yagoshikha (Ягошиха) in 1647; however, the history of the modern city of Perm starts with the development of the Ural region by Tsar Peter the Great. Vasily Tatishchev, appointed by the Tsar as a chief manager of Ural factories, founded Perm together with another major center of the Ural region, Yekaterinburg. 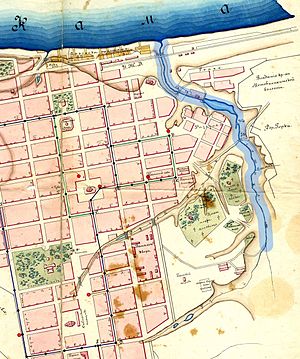 Map of Perm and the Yagoshikha River, 1898

In the 19th century, Perm became a major trade and industrial center with a population of more than 20,000 people in the 1860s, with several metallurgy, paper, and steamboat producing factories, including one owned by a British entrepreneur. In 1870, an opera theater was opened in the city, and in 1871 the first phosphoric factory in Russia was built. In 1916, Perm State University—a major educational institution in modern Russia—was opened. 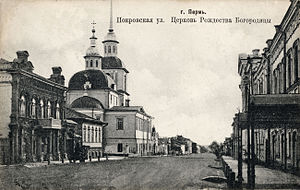 Pokrovskaya Street in central Perm around 1910

After the outbreak of the Russian Civil War, Perm became a prime target for both sides because of its military munitions factories. On December 25, 1918, the Siberian White Army under Anatoly Pepelyayev (who acknowledged the authority of the Omsk Government of Aleksandr Kolchak), took Perm. On July 1, 1919, the city was retaken by the Red Army.

In the 1930s, Perm grew as a major industrial city with aviation, shipbuilding, and chemical factories built during that period. During the Great Patriotic War (World War II), Perm was a vital center of artillery production in the Soviet Union. During the cold war, Perm became a closed city.[16] 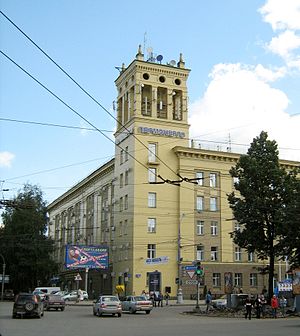 The city is a major administrative, industrial, scientific, and cultural center. The leading industries include machinery, defence, oil production (about 3% of Russian output), oil refining, chemical and petrochemical, timber and wood processing and the food industry.

Since 2004, in the city of Perm functioned modern Russia's first Muslim Cossack unit.

The first Jews who arrived in Perm were demobilized soldiers from the imperial army who were allowed, after completing their service, to settle outside the pale of settlement and, in 1861, there were 194 Jews in Perm. Over the years the community grew larger, and at the beginning of the 20th century, there were 1,000 Jews living in the city with their own synagogue on Kungurskaya Street (now Komsomolsky Avenue) and school for boys. After the Revolution of 1917 the building of the synagogue and community property were confiscated and were not returned until 1922.[17]

After the collapse of the Soviet Union, many Jews emigrated from the city. The first rabbi to arrive in the city after the collapse was David Vajs, who arrived in 1996. He was then replaced with Rabbi Eliyagy Habi in 2001.[citation needed]

On March 9, 2013, two unidentified assailants threw a rock and a Molotov cocktail through a window of the Jewish Community Center. A small area was set on fire, but a security guard extinguished it. Jewish community leaders ascribed the incident to incitement in the local media the previous week, related to stories about a new Torah scroll for the community.[18] 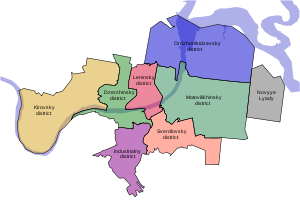 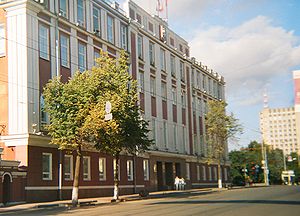 Building of the Perm Administration 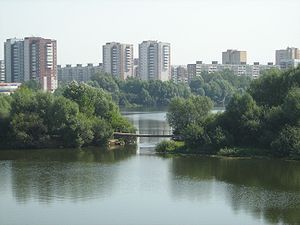 A view from the new bridge along the Stroiteley Street

For administrative purposes, Perm is divided into seven city districts:

Perm has the largest industrial output among cities in the Urals, ahead of Yekaterinburg, Chelyabinsk and Ufa, although Perm has a smaller population than these. 35% of Perm Oblast's industry is located in Perm.[19] The largest industries in the city are electric power engineering, oil and gas refining, machine building, chemicals and petrochemicals, forestry processing, printing and food industry.[20]

Several major industrial companies are located in Perm. Engine-makers Perm Motors and Aviadvigatel are among the major players of the Russian aircraft industry. Rocket engine company Proton-PM will mass-produce the RD-191 engine for the upcoming Angara rocket family. In electric engineering, Morion JSC and Perm Scientific and Industrial Group, along with Perm Electrical Engineering Plant are the leading companies. JSC KAMKABEL is Russia's largest exporter of cables and wires. Oil-refining and natural gas processing are also among the city's leading industries. The largest companies in this sector are LUKoil-Perm Ltd., and LUKoilPernefteprodukt Ltd.[19]

Perm is an important railway junction on the Trans-Siberian Railway with lines radiating to Central Russia, the north part of the Urals, and the far east of Russia. Perm has two big railway stations - historical Perm-I and modern Perm-II. The Kama River is an important link in the unifying deep-water system of the European part of Russia. The river connects the city with European waterways. It is possible to ship cargo from the Kama river area to the sea ports of the White, Baltic, Azov, Black, and Caspian seas without reloading.[21]

The Perm Metro is a planned construction of a metro system which has been considered. The first plans date back to the 1970s. A feasibility study was compiled in 1990 but economic difficulties during the decade prevented its final planning and construction. The plans were revitalized in the early 2000s, but a lack of funding hampered the project and plans were once again put on hold. Light rail has also been considered.[22] 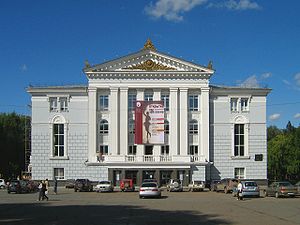 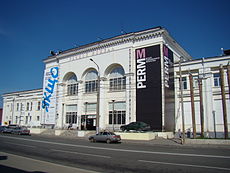 Among the cities museums and galleries, the Perm State Art Gallery is recognized for its outstanding collections of art, including paintings from the 15th- to 18th-century art movements, and wooden sculptures from the region. It is housed in a notable early 19th-century structure, once an orthodox cathedral. The spire of the museum towers over the rest of Perm, as it is situated on the Komsomolsky Prospect.[24] Perm is receiving attention from the development of the new Museum of Contemporary Art, Perm Museum of Contemporary Art (PERMM) which officially opened in March 2009.[25][26]

Perm is also home to the At the Bridge Theatre, the first mystical theatre in the world.[citation needed]

Perm is a scientific center; some of the scientific institutes are combined in the Perm Scientific Center of the Ural Branch of the Russian Academy of Sciences.

The following people were either born in Perm or made names for themselves while residing there.

The Nobel-prize-winning writer Boris Pasternak lived in Perm for a time, and it figures in his novel Doctor Zhivago under the fictional name "Yuriatin" where Yuri sees Lara again in the public library.[36]

Perm city is the most obvious example of a city marketing in Russia, the city has the logo.[37]

Perm is twinned with: