Perpetua and Felicity (Latin: Perpetua et Felicitas) were Christian martyrs of the 3rd century. Vibia Perpetua was a recently married well educated noblewoman, said to have been 22 years old at the time of her death, and mother of an infant she was nursing.[6] Felicity, a slave imprisoned with her and pregnant at the time, was martyred with her. They were put to death along with others at Carthage in the Roman province of Africa.

The Passion of Perpetua and Felicity narrates their death. According to the passion narrative, a slave named Revocatus, his fellow slave Felicitas, the two free men Saturninus and Secundulus, and Perpetua, who were catechumens – that is, Christians being instructed in the faith but not yet baptized – were arrested and executed at the military games in celebration of the Emperor Septimius Severus's birthday. To this group was added a man named Saturus, who voluntarily went before the magistrate and proclaimed himself a Christian. Perpetua's first person narrative was published posthumously as part of the Passion.[7][8]

Perpetua was imprisoned in Carthage in the days leading up to her martyrdom. She described these days and all that she endured in her diary.[6] Perpetua described the physical and emotional torments that she suffered in the prison leading up to her martyrdom. Perpetua suffered physically due to the heat, rough prison guards, and the cessation of regular breastfeeding. Perpetua also described how the prison conditions improved after herself and the other martyrs were moved to another part of the prison. Her physical torment was also eased after she was able to breastfeed her child.[9] Perpetua described bodily ailments in detail and the most common in her narrative was the cycle of pain and relief she would feel in her breasts. 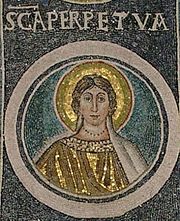 In Carthage a basilica was afterwards erected over the tomb of the martyrs, the Basilica Maiorum, where an ancient inscription bearing the names of Perpetua and Felicitas has been found.

Saints Felicitas and Perpetua are among the martyrs commemorated by name in the Roman Canon of the Mass.

The feast day of Saints Perpetua and Felicitas, 7 March, was celebrated even outside Africa and is entered in the Philocalian Calendar, the 4th-century calendar of martyrs venerated publicly at Rome. When Saint Thomas Aquinas's feast was inserted into the Roman calendar, for celebration on the same day, the two African saints were thenceforth only commemorated. This was the situation in the Tridentine Calendar established by Pope Pius V, and remained so until the year 1908, when Pope Pius X brought the date for celebrating them forward to 6 March.[10] In the 1969 revision of the General Roman Calendar the feast of Saint Thomas Aquinas was moved, and that of Saints Perpetua and Felicity was restored to their traditional 7 March date.[11]

Other Churches, including the Lutheran Church and the Episcopal Church, commemorate these two martyrs on 7 March, never having altered the date to 6 March. The Anglican Church of Canada, however, historically commemorated them on 6 March (The Book of Common Prayer, 1962), but have since changed to the traditional 7 March date (Book of Alternative Services, 1985).

Perpetua and Felicity are remembered in the Church of England with a Lesser Festival on 7 March.[12]

In the Eastern Orthodox Church the feast day of Saints Perpetua of Carthage and the catechumens Saturus, Revocatus, Saturninus, Secundulus, and Felicitas is 1 February.[3][4]