From Infogalactic: the planetary knowledge core
Jump to: navigation, search
File:Pat248872Fig1.jpg
Illustration from 1881 U.S. Patent 248872, for a perpetual calendar paperweight. The upper section is rotated to reveal one of seven lists of years (splitting leap years) for which the seven calendars below apply.
File:50yearcalendar.JPG
A 50-year "pocket calendar" that is adjusted by turning the dial to place the name of the month under the current year. One can then deduce the day of the week, or the date.

A perpetual calendar is a calendar valid for many years, usually designed to allow the calculation of the day of the week for a given date in the future.

For the Gregorian and Julian calendars, a perpetual calendar typically consists of one of two general variations:

The seven calendars may be combined into one, either with 13 columns of which only seven are revealed,[2][3] or with movable day-of-week names (as shown in the pocket perpetual calendar picture.

Note that such a perpetual calendar fails to indicate the dates of moveable feasts such as Easter, which are calculated based on a combination of events in the Tropical year and lunar cycles. These issues are dealt with in great detail in Computus.

An early example of a perpetual calendar for practical use is found in the manuscript GNM 3227a. The calendar covers the period of 1390–1495 (on which grounds the manuscript is dated to c. 1389). For each year of this period, it lists the number of weeks between Christmas day and Quinquagesima. This is the first known instance of a tabular form of perpetual calendar allowing the calculation of the moveable feasts which became popular during the 15th century.[4]

Other uses of the term "perpetual calendar"

These meanings are beyond the scope of the remainder of this article.

Perpetual calendars use algorithms to compute the day of the week for any given year, month, and day of month. Even though the individual operations in the formulas can be very efficiently implemented in software, they are too complicated for most people to perform all of the arithmetic mentally.[6] Perpetual calendar designers hide the complexity in tables to simplify their use.

Within each 100-year block, the cyclic nature of the Gregorian calendar proceeds in exactly the same fashion as its Julian predecessor: A common year begins and ends on the same day of the week, so the following year will begin on the next successive day of the week. A leap year has one more day, so the year following a leap year begins on the second day of the week after the leap year began. Every four years, the starting weekday advances five days, so over a 28-year period it advances 35, returning to the same place in both the leap year progression and the starting weekday. This cycle completes three times in 84 years, leaving 16 years in the fourth, incomplete cycle of the century.

A major complicating factor in constructing a perpetual calendar algorithm is the peculiar and variable length of February, which was at one time the last month of the year, leaving the first 11 months March through January with a five-month repeating pattern: 31, 30, 31, 30, 31, ..., so that the offset from March of the starting day of the week for any month could be easily determined. Zeller's congruence, a well-known algorithm for finding the day of week for any date, explicitly defines January and February as the "13th" and "14th" months of the previous year in order to take advantage of this regularity, but the month-dependent calculation is still very complicated for mental arithmetic:

Instead, a table-based perpetual calendar provides a simple look-up mechanism to find offset for the day of week for the first day of each month. To simplify the table, in a leap year January and February must either be treated as a separate year or have extra entries in the month table:

For each component of the date (the hundreds, remaining digits and month), the corresponding numbers in the far right hand column on the same line are added to each other and the day of the month. This total is then divided by 7 and the remainder from this division located in the far right hand column. The day of the week is beside it. Bold figures (e.g., 04) denote leap year. If a year ends in 00 and its hundreds are in bold it is a leap year. Thus 19 indicates that 1900 is not a Gregorian leap year, (but 19 in the Julian column indicates that it is a Julian leap year, as are all Julian x00 years). 20 indicates that 2000 is a leap year. Use Jan and Feb only in leap years.

A result control is shown by the calendar period from 1582 October 15 possible, but only for Gregorian calendar dates. 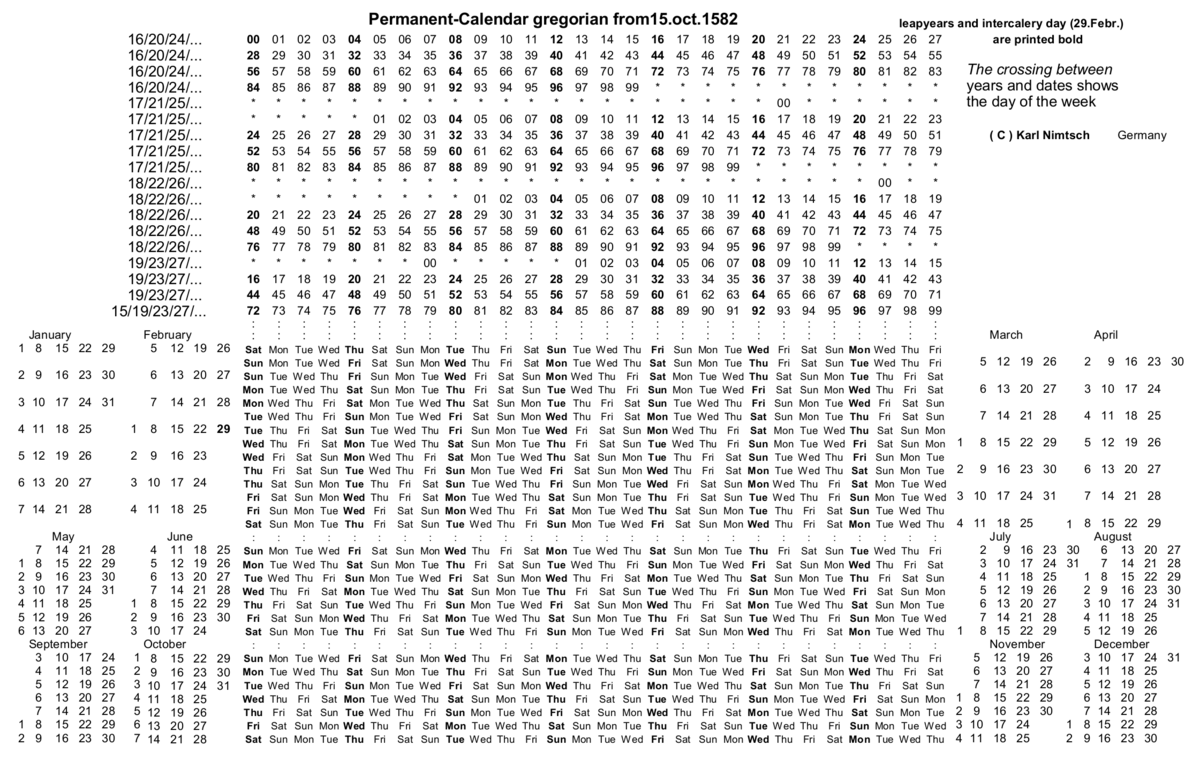 A genuinely perpetual calendar, which allows its user to look up the day of the week for any Gregorian date.