Kobzars were a unique class of musicians in Ukraine, who travelled between towns and sang dumas, a meditative poem-song. Kobzars were usually blind, and required the completion of a three-year apprenticeship in specialized Kobzar guilds, in order to be officially recognized as such. In 1932, on the order of Stalin, the Soviet authorities called on all Ukrainian Kobzars to attend a congress in Kharkiv. Those that arrived were taken outside the city and were all put to death.[citation needed]

The persecution of Kobzars started in 1876 under Imperial Russia with the publication of the Ems Ukaz: stage performances by kobzars and bandurists were officially banned. Paragraph 4 of the decree was specifically aimed at preventing all music, including ethnographic performances in the Ukrainian language. As a result, blind professional musicians such as the kobzars turned to the street for their sustenance. In the major Russian speaking cities they were often treated like common street beggars by the non-Ukrainian population, being arrested and having their instruments destroyed. The restrictions and brutal persecution were only halted in 1902 after a special delegation was sent to the Ministry of Internal Affairs from the Imperial Archaeological Society.

Persecution under the Soviets

Persecution of bandurists and kobzari by the Soviet authorities can be divided up into various periods. These periods differed in the type and length of persecution and punishments were dealt out and also the reason for the punishment.

The Revolution and the establishment of Soviet power

In 1918-20 a number of bandurists were shot by Bolsheviks after the October Revolution, during the Russian Civil War. Most of these bandurists were members of the various Ukrainian Armed forces or played for Ukrainian soldiers. Current accounts list some 20 known bandurists who perished in this time period. Few kobzari are included in this list. Few records accurately document the deaths of bandurists from this period.

From 1923 there was a period of tolerance to Ukrainian language and culture existed whilst Soviet power was entrenched in the country.During this time the popularity of the bandura grew considerably and unheeded.

1928 and the Union for the Liberation of Ukraine

By 1928, restrictions came into force directly affected the lifestyle of the traditional kobzars, and stopped them from traveling without a passport and performing without a license. Restrictions were also placed of accommodations that were not registered and also on manufacturing or making banduras without a license. In July, 1929 many Ukrainian intellectuals were arrested for being members of the Union for the Liberation of Ukraine. A number of prominent bandurists disappeared at about this time. Most of these bandurists had taken part in the Revolution of 1918 on the side of the Ukrainian National Republic. With the prosecution of the members of the organization for the Liberation of Ukraine a number of bandurists and also people who had helped organize bandura ensembles were included. Some were arrested and sent to camps in Siberia. Others were sent to dig the White Sea Canal. Some bandurists were able to escape from these camps. In the 1930s there was also a wave of arrests of bandurists in the Kuban. Many of these arrested bandurists received relatively light sentences of 5–10 years camp detentions or exile usually in Siberia. 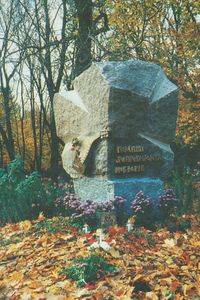 Monument to the murdered kobzars in Kharkiv

In the 1930s the authentic kobzar tradition of wandering musicians in Ukraine came to an end.

In 1978 evidence came to light (Solomon Volkov's Testimony: The Memoirs of Shostakovych and Leonid Plyushch's History's Carnival) (1978) about the mass murder of the Ukrainian blind musicians by the Soviet authorities. Previous mentions of such a tragedy date back to 1981 in the writings of dissident Ukrainian poet Mykola Horbach.

According to a widespread version, the musicians were gathered under the guise of an ethnographic conference and then mass-executed. Various versions give different times for the conference and location. The confusion is exacerbated by the fact that little differentiation is made between the kobzari and bandurists and lirnyky. Archival documents attesting to the organisation of such a conference have been found which were affirmed by bandurist Mykhailo Polotay who had been one of the instigators and organisers of the conference. Although no documents directly attesting to the mass-execution of the kobzari has been found to date, we do have a significant list of kobzari and bandurists who died or disappeared at this time.

By one of the versions the conference was organized near Kharkiv in December 1933, where 300 (c.50) blind kobzars and (c.250) lirnyks were gathered near the then Ukrainian capital of Kharkiv and left to die of exposure in a gully outside of the city limits. The location of this atrocity has recently been discovered on the territory of recreation building owned by the KGB (or the NKVD) in the area of Piatykhatky, Kharkiv Oblast. A monument has also been erected in the centre of Kharkiv to mark this tragic event.

In this period, documents attest to the fact that a large number of non-blind bandurists were also arrested at this time, however they received relatively light sentences of 2–5 years in penal colonies or exile.

In January 1934, the Ukrainian government decreed that the capital of the republic would move to Kiev. As all government departments were moved, many government organizations did not work correctly or efficiently for significant periods of time. In the move, many documents were lost and misplaced. 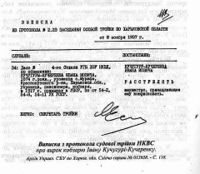 Document ordering the execution by shooting of blind kobzar I. Kuchuhura-Kucherenko in 1937.

Throughout the 1930s bandurists were constantly being arrested and taken off for questioning which may have lasted some months. Many were constantly harassed by the authorities. Whereas in the early 1930s those incriminated received relatively light sentences of 2–5 years the period, starting with 1937-38 the sentences were often fatal and immediate - death by shooting. In 1937-38 large numbers of bandurists were executed. Documents have survived of the many individual executions of bandurists and kobzars of this period. So far the documentation of 41 bandurists sentenced to be shot have been found with documents attesting to approximately 100 receiving sentences of between 10–17 years. Often those that were arrested were often tortured to obtain a confession. Sentences were pronounced by a Troika and was dealt out swiftly within hours or days of the hearing. The families of those that were executed were often told that the bandurist had been sent to a camp without the right to correspond.

In the 1950s, a number of bandurists also either died or disappeared under strange and unexplained circumstances. Some had accidents (Singalevych, Kukhta, Konyk). A significant number (approximately 30-50) of bandurists were also deported to Siberia from Western Ukraine. By the 1960s, total Communist Party control of the bandura art was achieved. A period of feminisation of the bandura took place where males were not accepted into conservatory courses to study the bandura. The repertoire of those that played the bandura underwent a major change from history songs and epics to romantic love and lyric works and transcriptions of classical piano works.

Most accounts of Nazi persecution of kobzars and bandurists were Soviet fabrications, however a number of prominent bandurist did die at the hands of the Nazis. One notable bandurist was Mykhailo Teliha who was executed in the tragic Babi Yar massacre in Kiev in February 1942.

Soviet sources tried attribute the deaths of numerous kobzars such as I. Kucherenko to the German-Nazi occupation. Recent documents have disproved most of these versions of their deaths.