While Black people in Nazi Germany were never subject to mass extermination as in the cases of Poles, Jews, and Romani, they were still considered by the Nazis to be an inferior race and, along with Romani people, were subject to the Nuremberg Laws under a supplementary decree.[1]

Even before World War I, Germany struggled with the idea of black Germans. While interracial marriage was legal under German law at the time, beginning in 1890, some colonial officials started refusing to register them, using eugenics arguments about the inferiority of mixed-race children to support their decision.[2] By 1912, this had become official policy in many German colonies, and a debate in the Reichstag over the legality of the interracial marriage bans ensued. A major concern brought up in debate was that mixed-race children born in such marriages would have German citizenship, and could therefore return to Germany with the same rights to vote, serve in the military, and hold public office as white Germans.[3]

After World War I, French occupation forces in the Rhineland included African colonial troops, some of whom fathered children with German women. Newspaper campaigns against the use of these troops focused on these children, dubbed "Rhineland bastards", often with lurid stories of uncivilized African soldiers raping innocent German women. In the Rhineland itself, local opinion of the troops was very different, and the soldiers were described as "courteous and often popular", possibly because French colonial soldiers harbored less ill-will towards Germans than war-weary French occupiers.[4] While subsequent discussions of Afro-German children revolved these "Rhineland Bastards", in fact, only 400-600 children were born to such unions,[5] compared to a total black population of 20,000-25,000 in Germany at the time.[6]

In Mein Kampf, Hitler described children resulting from marriages to African occupation soldiers as a contamination of the white race "by Negro blood on the Rhine in the heart of Europe."[7] He thought that "Jews were responsible for bringing Negroes into the Rhineland, with the ultimate idea of bastardizing the white race which they hate and thus lowering its cultural and political level so that the Jew might dominate."[8] He also implied that this was a plot on the part of the French, since the population of France was being increasingly "negrified".[9]

Under eugenics laws during the Third Reich, race alone was not sufficient criteria for forced sterilization, but anyone could request sterilization for themselves or a minor under their care.[10] The cohort of mixed-race children born during occupation were approaching adulthood when, in 1937, with Hitler's approval, a special Gestapo commission was created and charged with "the discrete sterilization of the Rhineland bastards."[11] It is unclear how much these minors were told about the procedures, or how many parents only consented under pressure from the Gestapo.[12] An estimated 500 children were sterilized under this program, including girls as young as 12.[13] 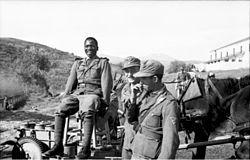 Soldiers of the Nazi Free Arabian Legion in Greece, September 1943.

Black people in Germany were socially isolated and forbidden to have sexual relations and marriages with Aryans by the racial laws.[14][15] Black people were placed at the bottom of the racial scale of non-Aryans along with Jews and Romani/Roma people.[16] The Nazis originally sought to rid the German state of Jews and Romani by means of extermination, while black people were to be segregated and eventually exterminated through compulsory sterilization.[16]

Beyond the compulsory sterilization program in the Rhineland, there was no coherent Nazi policy towards African Germans.[17] In one instance, when local officials petitioned for guidance on how to handle an Afro-German who could not find employment because he was a repeat criminal offender, they were told the population was too small to warrant the formulation of any official policy and to settle the case as they saw fit.[18] Due to the rhetoric at the time, Black Germans experienced discrimination in employment, welfare, and housing, and were also barred from pursuing a higher education.[19]

In the armed forces 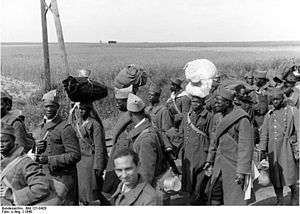 While no orders were issued in regards to black prisoners of war, some German commanders undertook to separate blacks from captured French units for summary execution.[21] There are also documented cases of captured African American soldiers suffering the same fate.[22] In the absence of any official policy, the treatment of black prisoners of war varied widely, and most captured black soldiers were taken prisoner rather than executed.[23] However, violence against black prisoners of war, while against the Geneva Conventions, was also never prosecuted by Nazi authorities.[24]

In prisoner of war camps, black soldiers were kept segregated from white, and generally experienced worse conditions than their white comrades, conditions that deteriorated further in the last days of the war.[22] Roughly half of the French colonial prisoners of war did not survive captivity.[25] Groups such as North Africans were sometimes treated as blacks, sometimes as whites.[26]