The Peruvian Air Force (Spanish: Fuerza Aérea del Perú, FAP) is the branch of the Peruvian Armed Forces tasked with defending the nation and its interests through the use of air power. Additional missions include assistance in safeguarding internal security, conducting disaster relief operations and participating in international peacekeeping operations.

This article covers Peruvian Air Force history and its ongoing efforts to maintain and improve its core fighter fleet.

On May 20, 1929, the aviation divisions of the Peruvian Army and Navy were merged into the Cuerpo de Aviación del Perú (Peruvian Aviation Corps, abbreviated CAP). During the Colombia-Peru War of 1933, its Vought O2U Corsair and Curtiss F11C Hawk planes fought in the Amazon region. The CAP lost three aircraft to the Colombian Air Force . The corps was renamed Cuerpo Aeronáutico del Perú (Peruvian Aeronautical Corps, also abbreviated CAP) on March 12, 1936.

In 1941, the CAP participated in the Peruvian-Ecuadorian War. At that time, the CAP were equipped with Caproni Ca.114 and North American NA.50 Torito fighters, Douglas DB-8A-3P attack aircraft, and Caproni Ca.135 Tipo Peru and Caproni Ca.310 Libeccio bombers,[1] among others.

The Peruvian Air Force had also established a paratroop unit during the war and used it to great effect by seizing the strategic Ecuadorian port city of Puerto Bolívar, on July 27, 1941, marking the first time in the Americas that airborne troops were use in combat.[2]

Lieutenant José A. Quiñones was a Peruvian pilot during the war. On July 23, 1941, his plane, a North American NA-50 fighter, was hit while performing a low-level attack on an Ecuadorian border post on the banks of the Zarumilla river. According to traditional Peruvian accounts, Quiñones, upon being hit, flew his aircraft directly toward an Ecuadorian anti-aircraft position and crashed against it. He was promoted posthumously to Captain, and is considered today a National Hero in Peru.[citation needed]

Since it´s creation FAP was a close ally of the USAF. Thus the Foreign Military Sales programme of the US Government was lenient to FAP´s desires and granted FAP main access to American / NATO military aviation technology and military hardware.

During the 1950s the presidency of pro-US General Manuel A. Odría had the Peruvian Air Force reorganized again and on July 18, 1950 had it´s name changed thus the Fuerza Aérea del Perú (Air Force of Peru, abbreviated FAP) was born.

At the end of General Odria´s presidency the FAP was introduced into the jet age with the arrival of several English Electric Canberra bombers and Hawker Hunters, Lockheed F-80 Shooting Star and North American F-86 Sabre fighters.

Thus changing until today the doctrine, the strategic planning and the status-quo of the Peruvian military.

General Velasco was a socialist dictator, eagerly desirous of achieving or obtaining a swift peruvian military success against Pinochet´s Chile ending in the recovery of the lost peruvian territories of Arica and Iquique lost to the chileans in the late 19th century.

General Velasco´s close ties with the Soviet Union and the socialist world had the side effect of a 1969 US arms embargo against the Peruvian Armed Forces.

Therefore, FAP and the Peruvian Armed Forces, due to the American military embargo could not get the spare parts it needed for it´s American/NATO aircraft, radars, submarines, tanks, APCs. navy ships, etc adquired previously.

General Velasco´s junta decided that it was in Peru´s best interest to leave the western military doctrine and start a new military strategy with Soviet help.

From 1970 until 1990, the Soviets helped the Peruvians kickstart a massive Peruvian re-armament, via expensive purchases of Soviet/Eastern block military hardware.

Peru also adopted the Soviet Military Doctrine and severed all ties with the US/NATO armed forces even expelled US military attaches in Peru, while at the same time allowed the stationing of Soviet advisers in Peru. Throughout the 1970s and 1980s FAP´s acquisitions saw the introduction of an important number of Soviet-made aircraft, including Sukhoi Su-22 fighters, Antonov An-26 and An-32 transport aircraft, as well as Mil Mi-8, Mi-17, Mi-25 and the Mi-26 helicopters.

The French-made Mirage 5P and 5DP, and after 1984 the adquisition of the Mirage 2000 and the re-start of purchase of U.S. made military aircraft such as the Cessna A-37B Dragonfly attack aircraft, the Lockheed C-130 and L-100-20 Hercules transport aircraft.

In 1982, during the Falklands War, re-elected Peruvian president Fernando Belaunde ordered the Peruvian Air Force to transfer ten of their Mirage M5-P to the Argentine Air Force fully equipped with AM39 Air Launched version Exocet missiles as a measure of solidarity.

The stagnation of the Peruvian economy during the late 1980s and early 1990s forced cost reductions and the downsizing of the fleet size. Budget cuts in training meant Peruvian pilots had a low number of annual flying hours (AFH) per pilot if compared to the 1970s. The number of annual flying hours is of course very important in estimating the individual skill and experience of the pilots of an air force: more annual flying hours suggests better trained pilots and general readiness. There are also a number of possible explanations for FAP`s low AFH: concern over the aging of equipment, scarcity of spare parts - especially for the older aircraft - difficulties with worn airframes and the scarcity of fuel are all contributing factors. It is very likely however that some 'elite' pilots and regiments such as those based in Talara AFB and La Joya AFB received considerably more flying hours. Especially since those regiments until today are equipped with modern aircraft and tasked with homeland defence.

Thus, in 1995 the Peruvian Air Force fought the Cenepa War against Ecuador`s FAE in the Amazonian skies ill equipped, having five fighter planes and 3 attack helicopters shot down by the ecuadoreans .

In 1997 and 1998 however things started to change for better in FAP´s outlook.

Peruvian president Alberto Fujimori had masterminded a clever peruvian revenge. FAP was tasked with hitting Ecuador hard, with 24/7 heavily bombardments of major Ecuadorian cities, air force and military bases as well as key infraestructure such as the port of Guayaquil, Ecuador´s main naval port. FAP´s hitlist also included the bombing of ecuadorian biggest oil refineries and oil fields at Lago Agrio. Since oil is Ecuador´s main export and source of revenue, FAP´s task was therefore to stall the ecuadorian economy.

After this first phase was achieved, then the peruvian navy and army were to cross the border and fight an all out war ending in the total peruvian invasion of Ecuador by december 1998.

In order to achieve Fujimori´s colossal military bold plans meant FAP getting a much needed general overhaul and new purchases.[3]

Therefore it is correct to state that the FAP was revived after 1995.

In 1998 an additional 3 MiG-29 fighters were bought from Russia which along with the 12 Mirage 2000 fighters purchased from France`s Dassault Aviation in 1984, makes a total of 54 fighters in Peru`s inventory.

The Mirages were bought from France in 1984, while the MiG-29s arrived via a disastrous 1995 deal with Belarus. Fortunately, Peru patched things up with Russia, and RAC MiG agreed to provide service and support.

These purchases have been expensive, and a number of observers have questioned their usefulness against more pressing security concerns, like Peru’s fanatical Marxist Sendero Luminoso (“Shining Path”) guerrillas. On the other hand, the FAP still remembers the 1995 Canepa War with Ecuador, and its Russian fighters are stationed very close to that border at Chiclayo AFB and Talara AFB.

Its Mirage 2000Ps sit at La Joya AFB near the border with Bolivia and Chile; the 3 Andean countries have a minor 3-way maritime borders dispute, and residual tensions with historical foe Chile have been a long-running theme in Peru.

In 2008, RAC MiG began the upgrade of FAP`s MiG fleet to the MiG-29SMT external link standard.

In 2009, Dassault began working with Peru on a comprehensive inspection of the Mirage fleet, coupled with some electronics modernization.

Finally, since 2013 Peru is in talks with European suppliers as part of a log-term plan of replacing FAP´s aging air force aircraft with second-hand Su-35, Rafale or Eurofighters.

Hitherto, FAP is currently exploring the possibility of buying as many as 60 Eurofighter Typhoon EF-2000 from Spain [4] and 60 Sukhoi 35 from Russia.[5]

Cost is a major issue for Peruvian President Ollanta Humala, who is looking at competitively priced fighter jets that will fit the national budget. 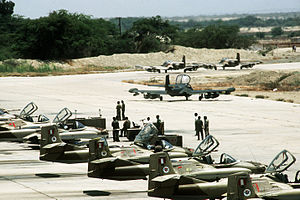 A-37Bs are based at Piura with the 7th Air Group 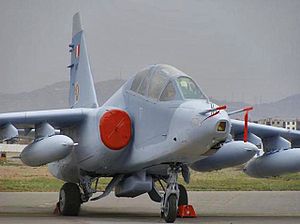 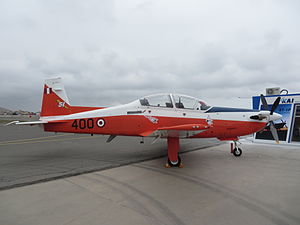 Peruvian KAI KT-1P Woongbi have been attached to Escuadrón Aéreo 512, along with AT-27 Tucano, which they will eventually replace in the near future.

MB-339s are used for advanced training. 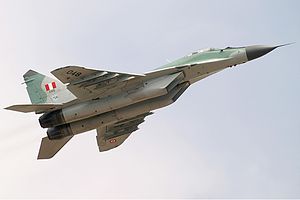 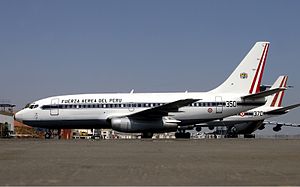 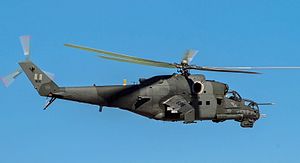 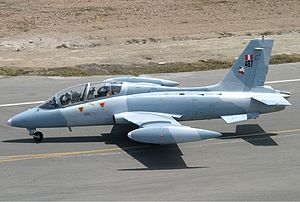 An Aermacchi MB-339 on the taxi way