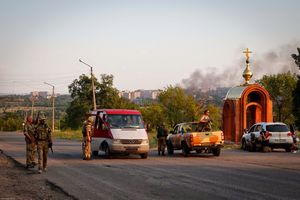 Ukrainian military roadblock near Pervomaisk in 2014

Pervomaisk (Ukrainian: Первомайськ, Russian: Первомайск) is a city in Luhansk Oblast, Ukraine. It is incorporated as a city of oblast significance. Population: 38,435 (2013 est.)[1]. As of 2001, the population was 38,800.[2] Northeast of Pervomaisk, there is the static inverter plant of HVDC Volgograd-Donbass.

In early January 2015 the civilian population was estimated at between 10000-20000, and Russian human rights campaigner and the chairman of the Memorial Oleg Orlov reported on the destruction evident in the town and on the acute food shortage.[18] The mayor, Yevgeny Ishchenko, was killed with three other people in January 2015.[19][20] The subsequent report of the Memorial stated that the city was almost destroyed and almost no intact buildings were standing as a result of continuous attacks by the Ukrainian army. The population was not evacuated, and its situation was described as a catastrophe.[17] According to a late September 2015 Russian Roulette Dispatch (by Vice News) at the time much of Pervomaisk was deprived of electricity and residents complained that only once a week they received water from water trucks.[16]