Saint Peter Damian (Latin: Petrus Damianus; Italian: Pietro or Pier Damiani; c. 1007 – 21 or 22 February 1072 or 1073)[1] was a reforming Benedictine monk and cardinal in the circle of Pope Leo IX. Dante placed him in one of the highest circles of Paradiso as a great predecessor of Saint Francis of Assisi and he was declared a Doctor of the Church in 1828. His feast day is February 21.

Peter was born in Ravenna, Italy, around 1007, the youngest of a large noble, but poor family. Orphaned early, he was at first adopted by an elder brother, who ill-treated and under-fed him while employing him as a swineherd. After some years, another brother, Damianus, who was archpriest at Ravenna, had pity on him and took him away to be educated. Adding his brother's name to his own, Peter made such rapid progress in his studies of theology and canon law, first at Ravenna, then at Faenza, and finally at the University of Parma, that when about twenty-five years old he was already a famous teacher at Parma and Ravenna.[2] 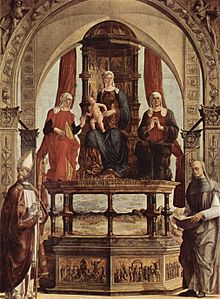 About 1035, however, he gave up his secular calling and, avoiding the compromised luxury of Cluniac monasteries, entered the isolated hermitage of Fonte Avellana, near Gubbio. Both as novice and as monk, his fervor was remarkable but led him to such extremes of self-mortification in penance that his health was affected, and he developed severe insomnia. On his recovery, he was appointed to lecture to his fellow monks. Then, at the request of Guy of Pomposa (Guido d'Arezzo) and other heads of neighboring monasteries, for two or three years he lectured to their brethren also, and (about 1042) wrote the life of St. Romuald for the monks of Pietrapertosa. Soon after his return to Fonte Avellana he was appointed economus (manager or housekeeper) of the house by the prior, who designated him as his successor. In 1043 he became prior of Fonte Avellana, and remained so until his death in February 1072.[2]

Subject-hermitages were founded at San Severino, Gamogna, Acerreta, Murciana, San Salvatore, Sitria and Ocri. A zealot for monastic and clerical reform, he introduced a more-severe discipline, including the practice of flagellation ("the disciplina"), into the house, which, under his rule, quickly attained celebrity, and became a model for other foundations, even the great abbey of Monte Cassino. There was much opposition outside his own circle to such extreme forms of penitence, but Peter's persistent advocacy ensured its acceptance, to such an extent that he was obliged later to moderate the imprudent zeal of some of his own hermits.[3]

Another innovation was that of the daily siesta, to make up for the fatigue of the night office. During his tenure of the priorate a cloister was built, silver chalices and a silver processional cross were purchased, and many books were added to the library.[3]

Although living in the seclusion of the cloister, Peter Damian closely watched the fortunes of the Church, and like his friend Hildebrand, the future Pope Gregory VII, he strove for reforms in a deplorable time. When Benedict IX resigned the pontificate into the hands of the archpriest John Gratian (Gregory VI) in 1045, Peter hailed the change with joy and wrote to the new pope, urging him to deal with the scandals of the church in Italy, singling out the wicked bishops of Pesaro, of Città di Castello and of Fano.[3]

Extending the area of his activities, he entered into communication with the Emperor Henry III. He was present in Rome when Clement II crowned Henry III and his consort Agnes, and he also attended a synod held at the Lateran in the first days of 1047, in which decrees were passed against simony.

After this he returned to his hermitage. About 1050, during the pontificate of Pope Leo IX, Peter wrote a scathing treatise on the vices of the clergy, including sexual abuse of minors and actions by church superiors to hide the crimes. Liber Gomorrhianus was openly addressed to the pope. Meanwhile, the question arose as to the validity of the ordinations of simoniacal clerics. Peter Damiani wrote (about 1053) a treatise, the Liber Gratissimus, in favor of their validity, a work which, though much combatted at the time, was potent in deciding the question in their favor before the end of the 12th century.

Pope Benedict XVI described him as "one of the most significant figures of the 11th century ... a lover of solitude and at the same time a fearless man of the Church, committed personally to the task of reform."[4]

Peter often condemned philosophy. He claimed that the first grammarian was the Devil, who taught Adam to decline deus in the plural. He argued that monks should not have to study philosophy, because Jesus did not choose philosophers as disciples, and so philosophy is not necessary for salvation. But the idea (later attributed to Thomas Aquinas) that philosophy should serve theology as a servant serves her mistress originated with him.[5] However, this apparent animosity may reflect his view that logic is only concerned with the validity of argument, rather than the nature of reality. Similar views are found in Al-Ghazali and Wittgenstein.

Damian's tract De divina omnipotentia is frequently misunderstood. Damian's purpose is to defend the "doctrine of omnipotence", which he defines as the ability of God to do anything that is good, i.e., God cannot lie. Toivo J. Holopainen identifies De divina omnipotentia as "an interesting document related to the early developments of medieval discussion concerning modalities and divine omnipotence."[2] Peter also recognized that God can act outside time, as Gregory of Rimini later argued.[6]

During his illness the pope died, and Frédéric, abbot of Monte Cassino, was elected pope as Stephen IX. In the autumn of 1057, Stephen IX determined to make Damian a cardinal. For a long time Damian resisted the offer, for he was more at ease as an itinerant hermit-preacher than a reformer from within the Curia, but was finally forced to accept, and was consecrated Cardinal Bishop of Ostia on 30 November 1057.[7] In addition he was appointed administrator of the Diocese of Gubbio. The new cardinal was impressed with the great responsibilities of his office and wrote a stirring letter to his brother-cardinals, exhorting them to shine by their example before all. Four months later Pope Stephen died at Florence, and the Church was once more distracted by schism. Peter was vigorous in his opposition to the antipope Benedict X, but force was on the side of the intruder and Damian retired temporarily to Fonte Avallana.

About the end of the year 1059 Peter was sent as legate to Milan by Pope Nicholas II. So bad was the state of things at Milan, that benefices (a reward received in exchange for services rendered and as a retainer for future services) were openly bought and sold, and the clergy publicly married the women with whom they lived. The resistance of the clergy of Milan to the reform of Ariald the Deacon and Anselm, Bishop of Lucca rendered a contest so bitter that an appeal was made to the Holy See. Nicholas II sent Damian and the Bishop of Lucca as his legates. The party of the irregular clerics took alarm and raised the cry that Rome had no authority over Milan. Peter boldly confronted the rioters in the cathedral, he proved to them the authority of the Holy See with such effect that all parties submitted to his decision.[4]

He exacted first a solemn oath from the archbishop and all his clergy that for the future no preferment should be paid for; then, imposing a penance on all who had been guilty, he reinstated in their benefices all who undertook to live in celibacy. This prudent decision was attacked by some of the rigorists at Rome, but was not reversed. Unfortunately, on the death of Nicholas II, the same disputes broke out; nor were they finally settled till after the martyrdom of St. Ariald in 1066. Meanwhile, Peter was pleading in vain to be released from the cares of his office. Neither Nicholas II nor Hildebrand would consent to spare him.

He rendered valuable assistance to Pope Alexander II in his struggle with the antipope, Honorius II. In July 1061 the pope died and once more a schism ensued. Peter Damian used all his powers to persuade the antipope Cadalous to withdraw, but to no purpose. Finally Anno II, Archbishop of Cologne and acting regent in Germany, summoned a council at Augsburg at which a long argument by Peter Damian was read and greatly contributed to the decision in favor of Alexander II.[4]

In 1063 the pope held a synod at Rome, at which Peter Damian was appointed legate to settle the dispute between the Abbey of Cluny and the Bishop of Mâcon. He proceeded to France, summoned a council at Chalon-sur-Saône, proved the justice of the contentions of Cluny, settled other questions at issue in the Church of France, and returned in the autumn to Fonte Avellana. While he was in France the antipope Cadalous had again become active in his attempts to gain Rome, and Peter Damian brought upon himself a sharp reproof from Alexander and Hildebrand for twice imprudently appealing to the royal power to judge the case anew. In 1067 the cardinal was sent to Florence to settle the dispute between the bishop and the monks of Vallombrosa, who accused the former of simony. His efforts, however, were not successful, largely because he misjudged the case and threw the weight of his authority on the side of the bishop. The matter was not settled until the following year by the pope in person.

Having served the papacy as legate to France and to Florence, he was allowed to resign his bishopric in 1067. After a period of retirement at Fonte Avellana, he proceeded in 1069 as papal legate to Germany, and persuaded the emperor Henry IV to give up his intention of divorcing his wife Bertha. This task he accomplished at a council in Frankfurt before returning to Fonte-Avellana.

Early in 1072 or 1073[1] he was sent to Ravenna to reconcile its inhabitants to the Holy See, they having been excommunicated for supporting their archbishop in his adhesion to the schism of Cadalous. On his return thence he was seized with fever near Faenza. He lay ill for a week at the monastery of Santa Maria degl'Angeli, now Santa Maria Vecchia. On the night preceding the feast of the Chair of St. Peter at Antioch, he ordered the office of the feast to be recited and at the end of the Lauds he died. He was at once buried in the monastery church, lest others should claim his relics.

During his concluding years he was not altogether in accord with the political ideas of Hildebrand. He died the year before Hildebrand became pope, as Gregory VII. "It removed from the scene the one man who could have restrained Gregory", Norman F. Cantor remarked (Civilization of the Middle Ages, p 251).

Peter Damian is a saint and was made a Doctor of the Church by Pope Leo XII in 1828 with a feast day celebrated on February 23.[7] His body has been moved six times. Since 1898, Peter Damian has rested in a chapel dedicated to the saint in the cathedral of Faenza. No formal canonization ever took place, but his cult has existed since his death at Faenza, at Fonte-Avellana, at Monte Cassino, and at Cluny. In 1970 his feast was moved to 21 February.

The saint is represented in art as a cardinal bearing a knotted rope (the disciplina) in his hand; also sometimes he is depicted as a pilgrim holding a papal Bull, to signify his many legations. 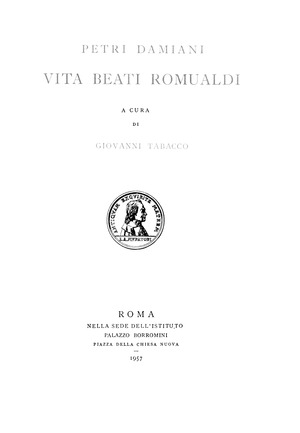 Peter Damian's voluminous writings, including treatises (67 survive), letters, sermons, prayers, hymns and liturgical texts (though, in a departure from many early medieval monks, no biblical commentaries)[8] reflect the spiritual conditions of Italy: the groundswell of intense personal piety that would overflow in the First Crusade at the end of the century, and his Latin abounds in denunciatory epithets.