Peter Rice (1935–1992) was an Irish structural engineer. Born in 52 Castle Road, Dundalk in County Louth, he spent his childhood between the town of Dundalk, and the villages of Gyles' Quay and Inniskeen. He was educated at the Queen's University of Belfast where he received his primary degree, and spent a year at Imperial College, London. He originally studied Aeronautical Engineering but switched to Civil Engineering. Taken on by Ove Arup & Partners, his first job was the roof of the Sydney Opera House. He married Sylvia Watson in 1965 and they had one son and three daughters. Jonathan Glancey in his obituary said "Rice was, perhaps, the James Joyce of structural engineering. His poetic invention, his ability to turn accepted ideas on their head and his rigorous mathematical and philosophical logic made him one of the most sought-after engineers of our times".[1]

He believed the best buildings result from the symbiotic relationship between the architect and the engineer where the engineer is the objective inventor and the architect the creative input. He found the Anglo Saxon understanding of the work of an engineer restrictive and preferred the French and Italian interpretation of the role.[2]

Among the notable buildings on whose design he worked are the Centre Pompidou, the Sydney Opera House, Lloyd's of London, the Louvre Pyramid, the Mound Stand at Lord's Cricket Ground, Kansai International Airport and Stansted Airport. 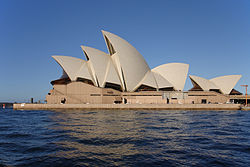 In 1956 he joined Ove Arup & Partners. In 1957 he took leave to pursue post graduate studies at Imperial College rejoining Arups in 1958. After three years working on Jørn Utzon shells for the roof of the Sydney Opera House in London, where he is credited with having done the geometry for the problematic design, he moved to Sydney to be assistant engineer to Ian MacKenzie. After one month MacKenzie fell ill and was hospitalised, leaving Rice in total charge at the age of 28. On site his geometrical knowledge enabled him to write a computer program to locate the segments of the shells correctly. In total he spent seven years working on the project. Afterwards, he spent 18 months in the United States, in New York and as visiting scholar at Cornell University.

In 1971 he was part of the winning team competing in the French government's competition for the centre of Paris at Beaubourg, partnering Richard Rogers and Renzo Piano. Edmund Happold was the senior Arup engineer for the competition. Rice became the engineer for the built project which was greatly modified from the initial design. Art and technology were intertwined in the design enabling him to experiment with materials. He brought the concepts of humanity, tactility and scale to the project His team developed the gerberette which enabled the counterbalancing of the weight of the building with light tubing, lightening the external appearance. He specified that these were to be made in cast steel. After the Pompidou Centre, Rice set up his own company in 1977—"RFR"—along with Martin Francis and Ian Ritchie although he continued with Arup as a partner. In 1978 he was involved with Rogers again, this time on Lloyd's of London, completed in 1984. During this time his other projects encompassed the Fleetguard Factory at Quimper in France, and Stansted Airport in London.

Although Rice was based in London, where he worked with Michael Hopkins on the tented Mound Stand at Lord's, much of his work was in Paris, including the great glass walls of the Cité des Sciences at La Villette and the tent-like canopy that softens the monumentality of the Grand Arche at La Défense. In 1985 I. M. Pei asked his help with projects at the Louvre in Paris, namely the shell structures for the glass roofs that Pei planned to cover inner courtyards.

By then he was in great demand continuing to work with architects such as Richard Rogers, I. M. Pei, Norman Foster, Ian Ritchie, Kenzo Tange, Paul Andreu, and Renzo Piano. The projects he worked on ranged from Toronto's Opera House by Moshe Safdie to Kansai's International Airport, one of many projects with the Renzo Piano Building Workshop.

In addition to his huge output, he was known for his sympathetic attitude to design, his strategic approach, a cool head and managing to realise ambitious artistic designs in concrete reality. One of his marks as an engineer was the length of time he allowed to complete a project.

During his relatively short career, Rice's contribution to the built environment can be seen in the work of the recent Pritzker Prize winners, including Richard Rogers, Norman Foster, Renzo Piano, and Zaha Hadid.

In 1992 he was the second engineer to be awarded the Royal Gold Medal for Architecture by the Royal Institute of British Architects (the first was Ove Arup), and the second Irishman after Michael Scott. The award is conferred by the Sovereign annually for work which has "promoted, either directly or indirectly, the advancement of architecture."

He was diagnosed with a brain tumour in 1991 and died the following year aged 57. A sign has been put up outside his childhood home, 52 Castle Road, Dundalk, County Louth, saying "Birthplace of Peter Rice, Engineer, 1935 – 1992". The plaque was erected privately by the (then) Dundalk Town Architect, Mr Paul Clancy

The Peter Rice Prize was established at the Harvard University Graduate School of Design in 1994 in recognition of the ideals and principles represented by the late eminent engineer.[3] The Peter Rice Silver Medal competition was established at Dundalk Institute of Technology ( His home town) in 1996 under the patronage of Ove Arup and Engineers Ireland (Institution of Engineers of Ireland ). This medal is awarded annually, to the best presentation by an engineering student of the Institute on their practical project activity. 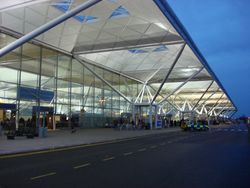