From Infogalactic: the planetary knowledge core
Jump to: navigation, search
For other uses of "Petrozavodsk", see Petrozavodsk (disambiguation).

Archeological discoveries in the urban area indicate the presence of a settlement as far back as seven thousand years ago, and during the Middle Ages the site of modern city was marked by several lakeside villages. Within the city limits, the district of Solomennoje appears in surviving records dating back to the sixteenth century, and a map produced by the Flemish cartographer Abraham Ortelius at the end of that century places a settlement here called Onegaborg on the site of modern Petrozavodsk.[13]

On September 11, 1703, Prince Menshikov founded the settlement of Petrovskaya Sloboda ("Petrine Sloboda"). He did so at the behest of Tsar Peter the Great, who needed a new iron foundry to manufacture cannons and anchors for the Baltic Fleet at the time of the Great Northern War (1700–1721). At first the foundry used the name Shuysky zavod (literally, "factory at the Shuya River"), but a decade later it became Petrovsky zavod ("Petrine factory"), after the name of the reigning monarch. From this form the present name of the city derives.

By 1717, Petrovskaya Sloboda had grown into the largest settlement in Karelia, with about 3,500 inhabitants, a timber fort, a covered market, and miniature palaces of the Tsar and Menshikov. The town's best-known landmark became the wooden church of Saints Peter and Paul, rebuilt in 1772 and renovated in 1789. The church retained its original iconostasis until this relic of Peter's reign was destroyed by fire on October 30, 1924.

After Peter's death, Petrovskaya Sloboda became depopulated and the factory declined. It closed down in 1734, although foreign industrialists maintained copper factories in the vicinity.

The industry revived in 1773 when Catherine the Great established a new iron foundry upstream the Lososinka River. Designed to provide cannons for the ongoing Russo-Turkish Wars, the foundry was named Alexandrovsky, after Alexander Nevsky, who was considered a patron saint of the region. The factory was modernized and expanded under supervision of Charles Gascoigne in 1787–96. Local pundits claim that the first railway in the world (чугунный колесопровод) was inaugurated for industrial uses of the Alexandrovsky foundry in 1788. 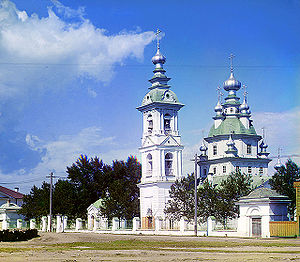 A church in Petrozavodsk, as photographed ca. 1912 by Sergey Prokudin-Gorsky 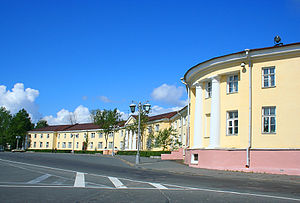 Round Square in central Petrozavodsk

During Catherine's municipal reform of 1777, Petrovskaya Sloboda was incorporated as a town, whereupon its name was changed to Petrozavodsk. A new Neoclassical city center was then built, focused on the newly planned Round Square. In 1784 Petrozavodsk was large enough to supplant Olonets as the administrative center of the region. Although Emperor Paul abolished Olonets Governorate, it was revived as a separate guberniya in 1801, with Petrozavodsk as its administrative center.

During the Finnish occupation of East Karelia in the Continuation War (1941–1944), the occupier chose to style the city Äänislinna (or Ääneslinna), rather than the traditional Petroskoi. The new name was a literal translation of Onegaborg, the name of a settlement marked on a 16th-century map by Abraham Ortelius near the present-day city, Ääninen being the Finnish toponym for Lake Onega.[citation needed]

The city was occupied by Finnish troops for nearly three years before it was retaken by Soviet forces on June 28, 1944. The Finns set up concentration camps for civilians of Russian ethnicity which they operated until the Red Army liberated the area. Six camps were set up in Petrozavodsk, with 23,984 civilians of Russian ethnicity confined in them. Civilians of Finnish, Karelian or other Finnic descent were not interned into these camps. Some of the camps were old Soviet camps and some only fenced city areas. One source estimated almost 4,000 people perished there, primarily because of malnourishment, most dying during the spring and summer of 1942.

Petrozavodsk is distinguished among other towns of North Russia by its Neoclassical architectural heritage, which includes the Round Square (1775, reconstructed in 1789 and 1839) and the Alexander Nevsky Cathedral (consecrated in 1832). Among the town's landmarks are the outdoor statues of Peter I (bronze and granite, Ippolit Monighetti, 1873), Gavrila Derzhavin (a Russian poet who was the governor of Olonets in the 18th century), and Alexander Nevsky (erected outside Alexander Nevsky Cathedral in 2010).

The city has a fine frontage on the Gulf of Petrozavodsk. The modern embankment, inaugurated in 1994, displays an assortment of Karelian granites and marbles. It is lined with extravagant postmodernist sculptures presented by sister cities of Petrozavodsk from around the world. There is also a birch copse, where the first church of Petrozavodsk was built in 1703.

Petrozavodsk is home to the Karelia Philharmonic Orchestra (1933)[2], the Karelian Musical Theater (1955, statuary by Sergey Konenkov), National Library of Karelia (1959), Finnish-speaking National Theater of Karelia (1965), Petrozavodsk State University, a conservatory, a city museum founded in 1871, and a branch of the Russian Academy of Sciences.

One of the city's central landmarks is Lenin Square, an oval space with a large Soviet-era statue of Lenin in the center. The square is especially notable for English-speaking visitors because it is also called "round square" - a paradox in English, but not in Russian (kruglaya ploshad). 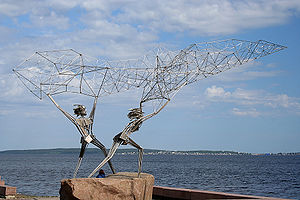 Statue of fishermen on the Onega embankment

The village of Shoksha near Petrozavodsk contains a quarry of red and pink quartzite which was used in construction of Saint Isaac's Cathedral and Lenin Mausoleum, among many other notable structures. There are also other quarries in the region excavating road aggregates (Goloday Gora – gabbro-diabase) near Derevyanka.

The suburb of Martsialnye Vody is the oldest spa in Russia, founded by Peter the Great in 1714 and visited by the Tsar on four occasions. Its name means "The Waters of Mars" in Russian. Although Peter's palace at Martsialnye Vody has not survived, there is a museum devoted to the spa's history.

From Petrozavodsk harbor a hydrofoil service of "KareliaFlot" company carries people to the island of Kizhi, a World Heritage Site with an outdoor museum of ancient wooden architecture.

The city is served by the Petrozavodsk Airport, and a train station on the Murmansk Railway with train connections to the main population centers of Russia.

Under the Köppen climate classification, Petrozavodsk experiences a subarctic climate (Dfc, one to three months with mean temperatures of +10 °C (50 °F) or greater), though with winters that are less severe than in many localities with this type of climate, thanks to the moderating influence of the Baltic Sea and the many nearby lakes. Winters, though long and cold, are mild for the high latitude, while summers are short and warm. Precipitation averages 581 mm (22.9 in) annually. 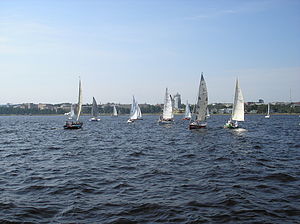 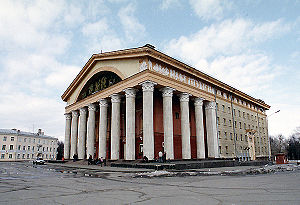 Petrozavodsk is twinned with: