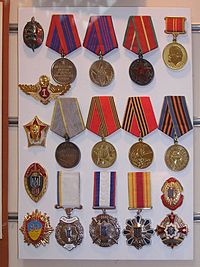 Medals from the History Museum of the Donetsk police

Phaleristics (from the Latin phalera; sometimes spelled Faleristics) is an auxiliary science of history which studies military, chivalric, dynastic, fraternal, civil and student orders, awards, medals and decorations and their systems of awards in differing countries (such as the British honours system). The field also studies the medals' accessories, such as ribbon bars, and award certificates. It studies the historical, sociological and art history dimensions. It also defines the study of badges and pins created for civilian usage. The term defines a field of collecting.[1]

Awards were common in ancient times, but these were strictly military awards. These awards presented real wages for certain services. They differed significantly from the later medieval and modern orders, which represented above all a sign of belonging to a particular organization, although there were also rewards for outstanding deeds.[citation needed]

The word comes from the Ancient Greece ta phalara (Greek: τὰ φάλαρα), meaning "small round" or "crescent". It referred to the shape of medallions that were given as recognition for outstanding military service or bravery on the battlefield; originally, phálara were hung round horses' necks, but as their importance grew, they were transferred to the fighter's chest.[citation needed]

Later, both the related customs and the term (Latin: phalera) were adopted by the Romans.[citation needed]

Phaleristics was established as a separate scientific discipline in 1937, thanks to the efforts of the Czech soldier, collector and theoretician Oldřich Pilc. This was to distinguish phaleristics from numismatics and heraldry. However, there had been several earlier scholars of phaleristics, such as the 19th century Russian phalerist Julius Iversen.[citation needed]

Although established as a scientific sub-discipline of history, phaleristics usually studies orders and decorations "detached from their bodies".[2]

King George VI of England loved the study of phaleristics, going to the extent of personally overseeing his uniform designs and ribbon placements. He is known to have designed a few British military decorations for the Royal Navy.[3]