From Infogalactic: the planetary knowledge core
Jump to: navigation, search
For other uses, see Pharaoh (disambiguation). 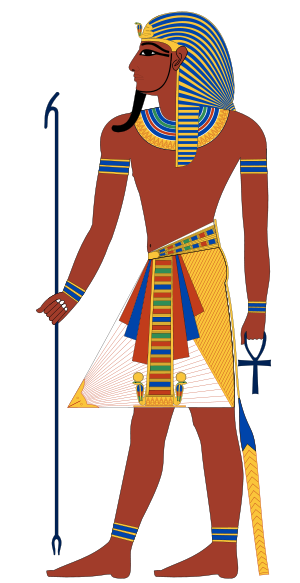 After Djoser of the third dynasty, pharaohs were usually depicted wearing the nemes headdress, a false beard, and an ornate kilt.

The word pharaoh ultimately derive from the Egyptian compound pr-ˤ3 "great house," written with the two biliteral hieroglyphs pr "house" and ˤ3 "column", here meaning "great" or "high". It was used only in larger phrases such as smr pr-ˤ3 'Courtier of the High House', with specific reference to the buildings of the court or palace.[4] From the twelfth dynasty onward, the word appears in a wish formula "Great House, may it live, prosper, and be in health", but again only with reference to the royal palace and not the person.

During the reign of Thutmose III (circa 1479–1425 BC) in the New Kingdom, after the foreign rule of the Hyksos during the Second Intermediate Period, pharaoh became the form of address for a person who was king.[5]

The earliest instance where pr-ˤ3 is used specifically to address the ruler is in a letter to Amenhotep IV (Akhenaten), who reigned circa 1353–1336 BC, which is addressed to "Pharaoh, all life, prosperity, and health".[6] During the eighteenth dynasty (16th to 14th centuries BC) the title pharaoh was employed as a reverential designation of the ruler. About the late twenty-first dynasty (10th century BC), however, instead of being used alone as before, it began to be added to the other titles before the ruler's name, and from the twenty-fifth dynasty (eighth to seventh centuries BC) it was, at least in ordinary usage, the only epithet prefixed to the royal appellative.[7]

From the nineteenth dynasty onward pr-ˤ3 on its own was used as regularly as hm.f, 'Majesty'. The term, therefore, evolved from a word specifically referring to a building to a respectful designation for the ruler, particularly by the twenty-second dynasty and twenty-third dynasty.[citation needed]

For instance, the first dated appearance of the title pharaoh being attached to a ruler's name occurs in Year 17 of Siamun on a fragment from the Karnak Priestly Annals. Here, an induction of an individual to the Amun priesthood is dated specifically to the reign of Pharaoh Siamun.[8] This new practice was continued under his successor Psusennes II and the twenty-second dynasty kings. For instance, the Large Dakhla stela is specifically dated to Year 5 of king 'Pharaoh Shoshenk, beloved of Amun' whom all Egyptologists concur was Shoshenq I—the founder of the Twenty-second dynasty—including Alan Gardiner in his original 1933 publication of this stela.[9] Shoshenq I was the second successor of Siamun. Meanwhile, the old custom of referring to the sovereign simply as pr-ˤ3 continued in traditional Egyptian narratives.[citation needed]

By this time, the Late Egyptian word is reconstructed to have been pronounced *[par-ʕoʔ] whence Herodotus derived the name of one of the Egyptian kings, Φερων.[10] In the Bible, the title also occurs as פרעה [par‘ōh]("Pharaoh").;[11] from that, Septuagint φαραώ pharaō and then Late Latin pharaō, both -n stem nouns. The Qur'an likewise spells it فرعون fir'awn with "n" (here, always referring to the one evil king in the Exodus story, by contrast to the good king Aziz in sura 12's Joseph story). Interestingly, the Arabic combines the original pharyngeal ayin sound from Egyptian, along with the -n ending from Greek.

English at first spelt it "Pharao", but the King James Bible revived "Pharaoh" with "h" from the Hebrew. Meanwhile in Egypt itself, *[par-ʕoʔ] evolved into Sahidic Coptic ⲡⲣ̅ⲣⲟ prro and then rro (by mistaking p- as the definite article prefix "the" from ancient Egyptian p3).[12]

Scepters and staves were a general sign of authority in ancient Egypt. One of the earliest royal scepters was discovered in the tomb of Khasekhemwy in Abydos. Kings were also known to carry a staff, and Pharaoh Anedjib is shown on stone vessels carrying a so-called mks-staff. The scepter with the longest history seems to be the heqa-scepter, sometimes described as the shepherd's crook. The earliest examples of this piece of regalia dates to pre-dynastic times. A scepter was found in a tomb at Abydos that dates to the late Naqada period.

Another scepter associated with the king is the was-scepter. This is a long staff mounted with an animal head. The earliest known depictions of the was-scepter date to the first dynasty. The was-scepter is shown in the hands of both kings and deities.

The flail later was closely related to the heqa-scepter (the crook and flail), but in early representations the king was also depicted solely with the flail, as shown in a late pre-dynastic knife handle which is now in the Metropolitan museum, and on the Narmer Macehead.[13]

The earliest evidence known of the Uraeus—a rearing cobra—is from the reign of Den from the first dynasty. The cobra supposedly protected the pharaoh by spitting fire at its enemies.[13]

The red crown of Lower Egypt, the Deshret crown, dates back to pre-dynastic times. A red crown has been found on a pottery shard from Naqada, and later, king Narmer is shown wearing the red crown on both the Narmer macehead and the Narmer palette.

The white crown of Upper Egypt, the Hedjet crown, is shown on the Qustul incense burner which dates to the pre-dynastic period. Later, King Scorpion was depicted wearing the white crown, as was Narmer.

The combination of red and white crown into the double crown, or Pschent crown, is first documented in the middle of the first dynasty. The earliest depiction may date to the reign of Djet, and is otherwise surely attested during the reign of Den.[13]

The Nemes headdress dates from the time of Djoser. The statue from his Serdab in Saqqara shows the king wearing the nemes headdress.[13] 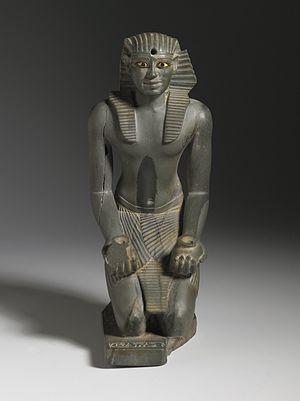 Egyptologist Bob Brier has noted that despite its widespread depiction in royal portraits, no ancient Egyptian crown ever has been discovered. Tutankhamun's tomb, discovered largely intact, did contain such regalia as his crook and flail, but no crown was found, however, among the funerary equipment. Diadems have been discovered.[14]

It is presumed that crowns would have been believed to have magical properties. Brier's speculation is that crowns were religious or state items, so a dead pharaoh likely could not retain a crown as a personal possession. The crowns may have been passed along to the successor.[citation needed]

During the early dynastic period kings had as many as three titles. The Horus name is the oldest and dates to the late pre-dynastic period. The Nesw Bity name was added during the first dynasty. The Nebty name was first introduced toward the end of the first dynasty.[13] The Golden falcon (bik-nbw) name is not well understood. The prenomen and nomen were introduced later and are traditionally enclosed in a cartouche.[15] By the Middle Kingdom, the official titulary of the ruler consisted of five names; Horus, nebty, golden Horus, nomen, and prenomen[16] for some rulers, only one or two of them may be known.

The Nesu Bity name, also known as Prenomen, was one of the new developments from the reign of Den. The name would follow the glyphs for the "Sedge and the Bee". The title is usually translated as king of Upper and Lower Egypt. The nsw bity name may have been the birth name of the king. It was often the name by which kings were recorded in the later annals and king lists.[13]

The earliest example of a nebty name comes from the reign of king Aha from the first dynasty. The title links the king with the goddesses of Upper and Lower Egypt Nekhbet and Wadjet.[13][15] The title is preceded by the vulture (Nekhbet) and the cobra (Wadjet) standing on a basket (the neb sign).[13]

The Golden Horus or Golden Falcon name was preceded by a falcon on a gold or nbw sign. The title may have represented the divine status of the king. The Horus associated with gold may be referring to the idea that the bodies of the deities were made of gold and the pyramids and obelisks are representations of (golden) sun-rays. The gold sign may also be a reference to Nubt, the city of Set. This would suggest that the iconography represents Horus conquering Set.[13] 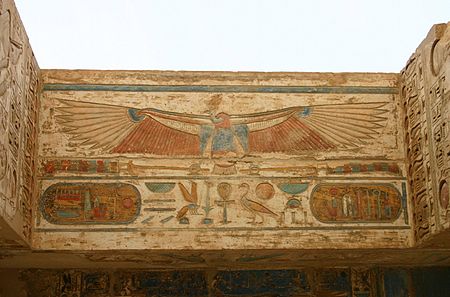 Nomen and prenomen of Ramesses III