A phenomenon (Greek: φαινόμενoν, phainomenon, from the verb φαίνειν, phainein, to show, shine, appear, to be manifest or manifest itself, plural phenomena),[1] is any thing which manifests itself. Phenomena are often, but not always, understood as "things that appear" or "experiences" for a sentient being, or in principle may be so.

The term came into its modern philosophical usage through Immanuel Kant, who contrasted it with the noumenon. In contrast to a phenomenon, a noumenon is not directly accessible to observation. Kant was heavily influenced by Leibniz in this part of his philosophy, in which phenomenon and noumenon serve as interrelated technical terms. 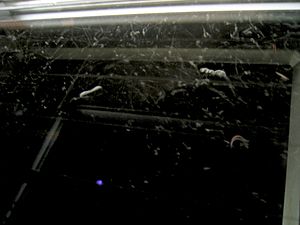 Cloud chamber phenomena. Scientists use phenomena to refine some hypotheses and sometimes to disprove a theory. See also animated version.

In modern philosophical use, the term 'phenomena' has come to mean 'what is experienced is the basis of reality'. In Immanuel Kant's Inaugural Dissertation, On the Form and Principles of the Sensible and Intelligible World (1770), Kant theorizes that the human mind is restricted to the logical world and thus can only interpret and understand occurrences according to their physical appearances. He wrote that humans could infer only as much as their senses allowed, but not experience the actual object itself. Thus, the term phenomenon refers to any incident deserving of inquiry and investigation, especially events that are particularly unusual or of distinctive importance.[1] According to The Columbia Encyclopedia, "Modern philosophers have used 'phenomenon' to designate what is apprehended before judgment is applied."[2] This may not be possible if observation is theory laden. 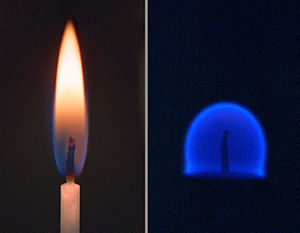 A comparison between a candle flame on Earth (left) and in a microgravity environment, such as that found on the ISS (right).
The same burning phenomenon is observed, but different flame shape and colouring phenomena are also observed. 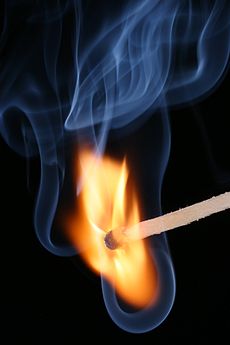 The combustion of a match is an observable occurrence, or event, and therefore a phenomenon.

In scientific usage, a phenomenon is any event that is observable, however common it might be, even if it requires the use of instrumentation to observe, record, or compile data concerning it. For example, in physics, a phenomenon may be a feature of matter, energy, or spacetime, such as Isaac Newton's observations of the moon's orbit and of gravity, or Galileo Galilei's observations of the motion of a pendulum.[3]

Another example of scientific phenomena can be found in the experience of phantom limb sensations. This occurrence, the sensation of feeling in amputated limbs, is reported by over 70% of amputees. Although the limb is no longer present, they report still experiencing sensations. This is an extraordinary event that defies typical logic and has been a source of much curiosity within the medical and physiological fields.[4]

In gemology, a phenomenon is an unusual optical effect that is displayed by a gem. Play-of-color, labradorescence, iridescence, adularescence, chatoyancy, asterism, aventurescence, lustre and color change are all phenomena of this type.[citation needed]

Group phenomena concern the behavior of a particular group of individual entities, usually organisms and most especially people. The behavior of individuals often changes in a group setting in various ways, and a group may have its own behaviors not possible for an individual because of the herd mentality.

Social phenomena apply especially to organisms and people in that subjective states are implicit in the term. Attitudes and events particular to a group may have effects beyond the group, and either be adapted by the larger society, or seen as aberrant, being punished or shunned.

In popular usage, a phenomenon often refers to an extraordinary event. The term is most commonly used to refer to occurrences that at first defy explanation or baffle the observer. According to the Dictionary of Visual Discourse, "In ordinary language 'phenomenon/phenomena' refer to any occurrence worthy of note and investigation, typically an untoward or unusual event, person or fact that is of special significance or otherwise notable."[1]