From Infogalactic: the planetary knowledge core
Jump to: navigation, search
For the Greek historian and mythographer, see Pherecydes of Leros.

Pherecydes of Syros (/fəˈrɛsᵻˌdiːz/; Φερεκύδης; fl. 6th century BC) was a Greek thinker from the island of Syros. Pherecydes authored a cosmogony, derived from three divine principles, Zas (Zeus),[1] Cthonie (Earth)[2] and Chronos (Time), known as the "Pentemychos" (Πεντέμυχος, "of the five recesses"; sometimes the alternative title "Heptamychos", "seven recesses" is given). It formed a bridge between the mythological thought of Hesiod and pre-Socratic philosophy. His work is lost, but it survived into the Hellenistic period and we are informed on part of its content indirectly. Pherecydes was said to have been the first writer to communicate philosophical musings in prose. According to William (ca. 1896), Aristotle regarded him partly a mythological writer and Plutarch, as well as many other writers gave him the title of Theologus.[3]

Anecdotes of "unknown reliability"[6] place Pherecydes on the island of Samos, and in the city of Ephesus, where he is supposed to have been buried, although another tradition claims he was buried on Delos.[7]

Aristotle wrote in his Metaphysics[8] of Pherecydes being in part a mythological writer and Plutarch, in his Parallel Lives,[9] instead wrote of him being a theologian. He was considered to have had the greater significance in teaching on the subject of metempsychosis.[10]

His writings were extant in the Hellenistic period, although only fragments have survived to the present day. His works were written in prose rather than verse and he has been said to have been the first to have communicated or conveyed philosophical musings in this form.[11] Tradition maintains that Pherecydes lived in two caves in the northern part of the island of Syros. His summer habitation remains a popular tourist destination to this day. 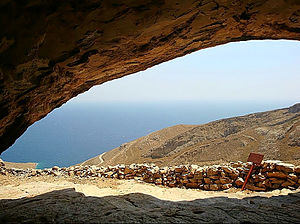 Some sources say that Pherecydes' book was entitled "Pentemychos" (Πεντέμυχος Pentemuchos) translated as five (πέντε) "recesses" (μυχός muchos, "nook, cranny, recess", also "sanctuary" as in "small domestic altar in a corner").[12] in some sources said to have been titled "Heptamychos" ("seven (ἑπτά) recesses"). There seems to be no complete agreement among scholars on which sources to trust regarding the title of Pherecydes' book, the standard survey reference on the Presocratic philosophers by Kirk, Raven and Schofield, opts for "Heptamychos".[13] The author of the only modern scholarly book devoted entirely to Pherecydes, Hermann S. Schibli, argues that "Pentemychos" was the true title.[14] In this work, Pherecydes taught his philosophy through the medium of mythic representations. Although it is lost, the fragments that survive are enough to reconstruct a basic outline.

In the older cosmogony of Hesiod (8th–7th century BC) the initial state of the universe is Chaos, a dark void considered as a divine primordial condition and the creation is ex nihilo (out of nothing). Pherecydes probably interpreted chaos as water and he does not place it at the very beginning. In his cosmogony there are three divine principles, Zas (Ζάς, Zeus), Cthonie (Χθονίη, Earth) and Chronos (Χρόνος, Time) who always existed.

The semen (seeds) of Chronos which can probably be considered as a watery chaos was placed in the recesses and composed numerous other offsprings of gods.[15] This is described in a fragment preserved in Damascius' On First Principles.

A close relationship is thought to exist between these recesses and Chthonie. Hesiod described Tartaros as being "in a recess (muchos) of broad-wayed earth".[16] Hermann S. Schibli thinks the five muchos were actually harboured within Chthonie, or at least were so initially when Chronos disposed his seed in the five "nooks".[17]

Alongside Chthonie and Chronos, Pherecydes held a power called Zas. Zas (Zeus), comparable with the Orphic Eros in function, and as such a personification of masculine (sexual) creativity. Proclus said that "Pherecydes used to say that Zeus changed into Eros when about to create, for the reason that, having created the world from opposites, he led it into agreement and peace and sowed sameness in all things, and unity that interpenetrates the universe".[18]

The act of creation itself (perhaps it is more accurate to say that Chronos creates and that Zas orders and distributes) is described mytho-poetically as Zas making a cloth on which he decorates earth and sea, and which he then presents as a wedding gift to Chthonie, and wraps around her. Yet, in another fragment it is not Chthonie, but "a winged oak" that he wraps the cloth around.[19] The "winged oak" in this cosmology has no precedent in Greek tradition.[20] The stories are different but not mutually exclusive, because much is lacking in the fragments, but it seems clear that creation is hindered by chaotic forces. 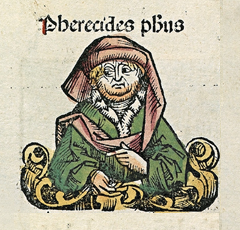 Pherecydes, depicted as a medieval scholar in the Nuremberg Chronicle 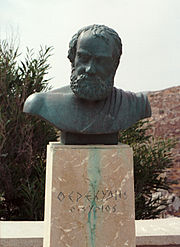 Before the world is ordered a cosmic battle takes place, with Kronos (ordered time) as the head of one side and Ophioneus as the leader of the other.[21] The same story is elsewhere enacted with Zeus and Typhon/Typhoeus as leading characters, and it also has close parallels in many myths from cultures other than the Greek (Marduk vs. Tiamat, etc.). Ophioneus and its brood are often depicted as ruling the birthing cosmos for some time, before falling from power. The chaotic forces are eternal and cannot be destroyed; instead they are thrown out from the ordered world and locked away in Tartaros in a kind of "appointment of the spheres", in which the victor (Zeus-Kronos) takes possession of the sky and of space and time.[22] The locks to Tartaros are fashioned in iron by Zeus, and might hence have been associated with his element of aither, and in bronze by Poseidon, which might indicate a link to water (which was often conceived of as the "first matter"). Judging from some ancient fragments Ophioneus is thrown into Okeanos, not into Tartaros.

Exactly what entities or forces that were locked away in Pherecydes’ story cannot be known for sure. There may have been five principal figures. Ophioneus and Typhon are one and the same, and Eurynome fought on the side of Ophioneus against Kronos.[23] Chthonie is a principal "thing" of the underworld, but whether she is to be counted as one of the five or the five "sum-total" is an open question. Apart from these it is known that Ophioneus-Typhon mated with Echidna, and that Echidna herself was somehow mysteriously "produced" by Callirhoe. If Pherecydes counted five principal entities in association the pentemychos doctrine, then Ophioneus, Eurynome, Echidna, Calirrhoe and Chthonie are the main contenders.

Kronos (or Zeus in the more popularly known version) orders the offspring out from the cosmos to Tartaros. There they are kept behind locked gates, fashioned in iron (associated with Zeus and his element of sky/space) and bronze (by Poseidon—the water force). We are told about chaotic beings put into the pentemychos, and we are told that the Darkness has an offspring that is cast into the recesses of Tartaros. No surviving fragment makes the connection, but it is possible that the prison-house in Tartaros and the pentemychos are ways of referring to the essentially same thing. According to Celsus, Pherecydes said that: "Below that portion is the portion of Tartaros; the daughters of Boreas [the north wind], the Harpies and Thuella [Storm], guard it; there Zeus banished any of the gods whenever one behaves with insolence."[24] Thus the identity between Zeus' prison-house and the pentemychos seems likely.

Pherecydes' "Pentemychos" was thought to have contained a mystical esoteric teaching, treated allegorically. One ancient commentator said that:

Also, Pherecydes, the man of Syros, talks of recesses and pits and caves and doors and gates, and through these speaks in riddles of becomings and deceases of souls.[25]

A comparatively large number of sources say Pherecydes was the first to teach the eternality and transmigration (metempsychosis) of human souls.[26] Both Cicero and Augustine thought of him having given the first teaching of the "immortality of the soul".[27] It is not surprising that some considered Pherecydes to have been the teacher of Pythagoras.[28] That he was the first to teach such a thing is doubtful, but that he was among the first and that he did profess this teaching is certain. Hermann S. Schibli concludes that Pherecydes "included in his book ["Pentemychos"] at least a rudimentary treatment of the immortality of the soul, its wanderings in the underworld, and the reasons for the soul’s incarnations".[29]

Pherecydes was occasionally counted among the Seven Sages of Greece.[30] A sun-dial (heliotropion), supposedly made by Pherecydes, was said by Diogenes Laërtius to be "preserved on the island of Syros."[31]

Basing himself on the extant fragments of Pherecydes' work, on testimonia from ancient authors regarding Pherecydes' philosophy, as well as on themes from Ancient Greek and Near Eastern mythologies, Hermann S. Schibli offers the following reconstruction of the main elements of Pherecydes' lost book:

CHRONOS and Zas always were, and also Chthonie (Ζὰς μὲν καὶ Χρόνος ἦσαν ἀεὶ καὶ Χθονίη). Once Chronos, alone and without a partner, cast forth his seed. From his seed he made fire, air, and water, and deposited these in five hollows. Lo, from the mixtures of fire, air and water in the hollows arose another generation of gods. The fiery gods dwelt in Ouranos and gleaming Aither, the gods of wind in gusty Tartaros, the watery gods in Chaos, and the gods of darkness dwelt in black Night.

After the generation of gods, born of the seed of Time, assumed their habitations, Zas became Eros and married Chthonie. The other gods built many large palaces for him; they provided all the necessary goods, the banquet tables, servants and maids, and when all the needful things had been accomplished, they performed the wedding. On the third day of the wedding, Zas fashioned a big and beautiful robe, and on it he embroidered Earth and Ogenos and the mansions of Ogenos. When he had finished his task, he presented the robe to Chthonie and said: 'Because I wish to marry you, I honour you with this robe. Rejoice and be my consort!' This they say was the first feast of unveiling, and hence arose the custom for both gods and men. And she responded as she received the robe from him: 'I take this as my honour, and henceforth I shall be called Ge...' The gods celebrated, feasting on ambrosia. And the Earth was like a winged oak, strong and mighty; its roots extended into the depths of Tartaros, its trunk was encircled by Ogenos, and its branches reached into Ouranos. The Earth flourished and Zas rejoiced.

But below the Earth, in a hollow of Tartaros, Ophioneus was born. He and his monstrous sons challenged Kronos. The battle-lines were drawn up, with Kronos the commander of one army and Ophioneus leading the Ophionidai. The terms of the battle were stated: whichever of them fell into Ogenos would be the defeated, while those who thrust them out and defeated them would possess Ouranos. A fierce conflict followed. Kronos had a strong ally in Zas; in single combat he overthrew Ophioneus. So Ophioneus and his brood were cast into Ogenos, and they dwell in the mansions of Ogenos to this day. Kronos, commander of the victorious army, was crowned by the other gods (from this arose the custom of the wearing of crowns by victors). Zeus honoured the victorious gods and assigned them their domains. Kronos had won Ouranos. These are the shares of the other gods: below Ouranos is the fiery Aither; below Aither the portion of Earth; below that portion is Tartaros; the daughters of Boreas, the Harpies and Thuella, guard it; there Zeus banishes any of the gods who behave with insolence. There also are the souls of men who have committed bloodshed. Their souls are borne through the portals and gates of Tartaros on an outflowing river to birth; the river is like the seed that leads to new life. And the souls of men depart from life and enter again the caves and hollows of Tartaros through its portals and gates. Alongside Tartaros is Chaos and the realms of dark Night. [32]