Philip Norman "Phil" Bredesen, Jr. (born November 21, 1943) is an American politician who served as the 48th Governor of Tennessee from 2003 to 2011. A member of the Democratic Party, he was first elected Governor in 2002, and was re-elected in 2006. He previously served as the fourth mayor of Nashville and Davidson County, from 1991 to 1999. Bredesen is the founder of the HealthAmerica Corporation, which he sold in 1986.

Bredesen was born in Oceanport, New Jersey. His parents were Norma Lucille (née Walborn) and Philip Norman Bredesen. His father, a captain in the U.S. Army Signal Corps, was stationed at Fort Monmouth in New Jersey at the time of Bredesen's birth. The family lived in various locations during Bredesen's early childhood, including Canandaigua, New York and Arlington, Massachusetts.

When his parents separated in 1951, Norma moved with her two sons, Phil and his younger brother, Dean (1947–2006), to her family home in Shortsville, New York, where they lived with Bredesen's maternal grandmother, a widow. Shortsville is the community Bredesen considers to be his hometown, and he lived there until he left for college.[1] He attended the Red Jacket Central Elementary and Secondary School, located in the adjoining village of Manchester.[2]

In 1961, Bredesen entered Harvard College, where he concentrated in physics and lived in Quincy House. He received his A.B. in 1967.[3] After graduating, he moved to Lexington, Massachusetts, where did classified work for Itek.[1] Bredesen married Susan Cleaves in 1968, but they divorced in 1974 and had no children.[4]

In 1968, Bredesen worked for the campaign of Minnesota congressman Eugene McCarthy, who was seeking the Democratic presidential nomination.[1] Bredesen launched his first political campaign in 1969, when he ran for the Massachusetts State Senate. He was defeated by a popular incumbent Republican, Ronald MacKenzie.[1]

Bredesen joined pharmaceutical firm G.D. Searle & Company in 1971, and moved to London in 1973 to manage one of the company's divisions.[4] In 1974, Bredesen married Andrea Conte in Wheatley, Oxfordshire, England, and the two have one son, Ben. In 1975, the family moved to Nashville, Tennessee, where Conte had been recruited by Hospital Corporation of America.[1] In Nashville, Bredesen founded HealthAmerica Corp., an insurance company that eventually grew to more than 6,000 employees and was publicly traded on the New York Stock Exchange.[5] He sold his controlling interest in HealthAmerica in 1986,[5] and because of the wealth he earned from his work with the company, he did not accept his gubernatorial salary.[6]

In 1987, Bredesen ran for Mayor of Nashville. He finished second out of 10 candidates with 30% of the vote, losing only to 5th District Congressman Bill Boner, who won 46%.[7] Since Boner fell short of the necessary threshold for an outright victory, he and Bredesen faced each other in a runoff. Boner won the runoff, 75,790 votes to 66,153,[8] largely by emphasizing that he was a Nashville native while Bredesen was a Northerner.[9]

In December 1987, Bredesen ran in the Democratic primary for the 5th District congressional seat left open by Boner's victory. However, he finished a distant second behind Bob Clement, son of former governor Frank G. Clement.[8]

In the years following his loss in the 1987 election, Bredesen quietly established relationships with city officials and prepared for a second run. Nashville, meanwhile, struggled economically. In the 1991 mayoral race, Boner was dealing with a personal scandal, and declined to run.[10] In the general election, Bredesen defeated his chief opponent, Councilwoman Betty Nixon, 78,896 votes to 30,282.[8]

As mayor of Nashville, Bredesen added more than 440 new teachers, built 32 new schools and renovated 43 others. He also implemented a back-to-basics curriculum to teach students the fundamentals of learning.[5] Additionally, under the Bredesen Administration, the NFL's Houston Oilers (now Tennessee Titans) were brought to Nashville and furnished with a new stadium, Nissan Stadium; the NHL awarded Nashville its first of four new expansion franchises, the Nashville Predators, and a new arena, Bridgestone Arena was built.[10] Bredesen's attempts to lure the NBA's Minnesota Timberwolves to Nashville were ultimately unsuccessful.[11] A new downtown library was built as a cornerstone of major improvements to the entire library system, the city's downtown entertainment district was renovated,[5] and two parks, Beaman Park and Shelby Bottoms, were established.[10]

Bredesen did not run for a third term in 1999. The Metro Charter had been amended in 1994 to limit city council members to two consecutive four-year terms, and was worded in such a way that it appeared to apply to mayors as well.[12] Although mayors had been permitted to serve a maximum of three consecutive terms since the formation of Metro Nashville in 1963, Bredesen did not make an issue of that.

In 1994, Bredesen won the Democratic nomination for governor, capturing 53% of the vote in a primary that included more than a half-dozen candidates, among them Shelby County Mayor Bill Morris and state senator Steve Cohen.[8] He faced the Republican nominee, 7th District Congressman Don Sundquist, in the November general election. The race was initially thought to be one of the hottest races of the cycle, but Sundquist won by a large margin, 807,104 votes to 664,252.[8]

Bredesen again ran for governor in 2002. He easily won the Democratic nomination, capturing nearly 80% of the vote in a six-candidate primary,[8] and faced Republican 4th District Congressman Van Hilleary in November (the incumbent, Sundquist, was term-limited). Bredesen promised to manage state government better, improve Tennessee's schools and use his experience as a managed-care executive to fix TennCare, which had created a critical budget shortfall toward the end of Sundquist's term. His reputation as a moderate Democrat was well established (he is a member of the "good government" faction of the Nashville Democratic Party), so Hilleary's attempts to brand him as a liberal ultimately failed. Republicans also suffered from Sundquist's unpopular attempts to implement a state income tax.[13] Bredesen garnered more support in East Tennessee than was usual for a Democrat, especially a Democrat from Nashville. In November, Bredesen narrowly defeated Hilleary, 837,284 votes to 786,803.[8]

Bredesen became governor amidst a fiscal crisis, with a predicted state budget shortfall of $800 million. Much of the budget shortfall was due to TennCare, which was $650 million over budget.[1] His predecessor, Sundquist, had hoped to remedy the budget shortfall by implementing an income tax, but this proved wildly unpopular and was never enacted.[13] Bredesen argued that in order to fix the budget, services would have to be cut, later stating, "you can't have Massachusetts services and Tennessee taxes."[13] In 2003, he signed a 9% across-the-board spending cut.[1] In 2004, he enacted a series of changes to TennCare, essentially removing 191,000 Medicaid-eligible patients and reducing benefits. By 2006, these changes had reduced the program's cost by more than $500 million.[1] Bredesen used some of the savings to establish a "safety net" for health clinics affected by the cuts. In 2006, he implemented "Cover Tennessee" to provide coverage for people with pre-existing conditions and the uninsured.[1]

During his first term, Bredesen enacted a number of measures aimed at improving education. In 2003, the state established the Tennessee Lottery to fund college scholarships for the state's high school graduates.[1] Teachers' pay was raised above average salary in the Southeast, and Tennessee’s pre-kindergarten initiative was expanded to include a statewide program for four-year-olds. He created the Governor’s Books from Birth Foundation, a statewide expansion of Dolly Parton’s Imagination Library that offers free books for children. In his fourth year, Bredesen signed legislation that increased funding for education by $366.5 million, much of which came from savings due to TennCare reform.[1]

To attract new industry, Bredesen worked with the General Assembly to reform Tennessee’s worker compensation system (his changes were supported by the business community and opposed by trial lawyers),[1] and invest in programs to help laid-off employees develop new skills. During his tenure, 2,889 companies— including Nissan and International Paper— expanded or moved to Tennessee, bringing more than 104,000 jobs and $12.8 billion in new business investment to the state.[14] 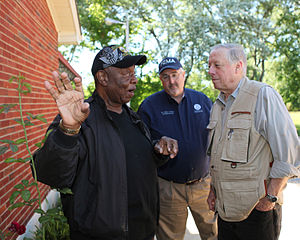 Bredesen launched Tennessee’s war on methamphetamine abuse, focusing on treatment, prevention and public awareness, with the Governor’s Meth-Free Tennessee initiative. In addition, the criminal penalties and resources for law enforcement were enhanced as part of this program, which led to a 50 percent decline in illegal and toxic meth labs.[15]

In his 2006 reelection campaign, Bredesen brushed off a primary challenge from John Jay Hooker, winning nearly 90% of the vote.[8] In the general election, he defeated state senator Jim Bryson, 1,247,491 votes to 540,853.[8] He swept all 95 counties, and garnered more votes than any gubernatorial candidate in state history.

In 2007, Bredesen was criticized for proposing a privately funded $4.8 million underground entertainment annex to the Tennessee Governor's Mansion. Critics labelled the proposed complex "Bredesen's Bunker," and derided it as too elaborate and expensive.[17]

In August 2008, Bredesen enacted further cuts to TennCare, placing restrictions to services of 10,800 TennCare patients who received some type of home nursing care. The new limits affected about 1,000 of those patients.[18][19]

In the 2008 elections, Republicans gained control of both chambers of the General Assembly for the first time since Reconstruction. Furthermore, the economy faltered with the onset of the Great Recession, limiting what Bredesen could accomplish during his remaining years in office. In 2009, Bredesen called for nearly $129 million in state spending cuts, and enacted a voluntary buyout for state employees that reduced the workforce by 5% without requiring layoffs.[1] In May 2009, Bredesen vetoed a bill that would have allowed people to carry guns in bars, but the legislature overrode his veto.[1]

Bredesen is a supporter of capital punishment,[20] presiding over four executions during his tenure. He commuted the death sentence for one inmate, Gaile Owens, to life without parole, citing "ineffective legal counsel at his sentencing and procedural limitations on his appeals".[21]

Viewed by many as a centrist Democrat based in the South, Bredesen was touted as a potential presidential candidate in 2008. Bredesen, however, stated no interest in joining the wide field of Democrats that sought the Democratic nomination. He did not comment on joining a Democratic ticket as Vice-President. On June 4, 2008, Governor Bredesen endorsed Barack Obama for president.[22]

Following the withdrawal of former Senator Tom Daschle as nominee for United States Secretary of Health and Human Services in the Obama administration, The Atlantic correspondent Marc Ambinder claimed that Bredesen was being vetted as a possible replacement. Kansas governor Kathleen Sebelius was eventually chosen for the post.[23][24]

Bredesen is a licensed pilot, a hunter, outdoorsman and enjoys painting.[25][26][27]

Bredesen is a founding member of Nashville's Table, a non-profit group that collects overstocked and discarded food from local restaurants for the city's homeless population. He served on the board of the Frist Center, a major art gallery that was established to utilize the former downtown Nashville post office.[5]