Philipp Heinrich Scheidemann (26 July 1865 – 29 November 1939) was a German politician of the Social Democratic Party of Germany (SPD). During the German Revolution of 1918–1919 he proclaimed Germany a republic on 9 November 1918 and subsequently became the second head of government of the Weimar Republic, acting in this post for 127 days.

Scheidemann attended Bürgerschule and Höhere Bürgerschule in 1871-79. After the death of his father the family fell into poverty. In 1879-83 Scheidemann was apprenticed as a printer.[1][2]

Political career and World War I

In 1903, Scheidemann was elected to the Reichstag for the SPD for a Solingen constituency and retained his seat until 1918. In 1906 he also became a member of the city council of Kassel, a position he held until 1911 when he became part of the Parteivorstand (party executive) of the SPD (Sekretär).[2]

After the 1912 elections Scheidemann was the first social democrat to become 1. Vizepräsident of the Reichstag.[1] When August Bebel died in 1913, Scheidemann and Hugo Haase became joint chairmen of the SPD Reichstagsfraktion (parliamentary group).[2] His oratory skills, pragmatism, sense of humour and middle-class manners won him appreciation beyond his own party.[1]

Although he voted for the Imperial war loans in 1914, during World War I Scheidemann argued for a Verständigungsfrieden (compromise peace) without annexations or reparation demands (it also became known as Scheidemannfrieden). Scheidemann tried to mediate between the left and right wings of his party, but could not prevent the eventual split. In 1917, the SPD split on the issue of continued funding for the war effort and Scheidemann became chairman of the "Majority" SPD, alongside Friedrich Ebert.[2] In January 1918, during the Januarstreik, he was a member of the "Executive Council". He joined the new government of Prince Max of Baden in October 1918 as Staatssekretär (secretary of state) without portfolio.[2] This was the very first time members of the SPD had served in the Imperial government, although the party had had the largest number of seats in the Reichstag since 1912. Scheidemann was chosen for the position due to his popularity.[1] 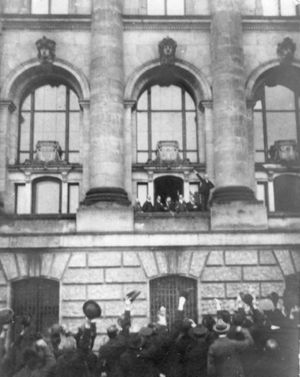 On 9 November 1918, Chancellor Max von Baden unilaterally announced the abdication of Emperor Wilhelm II and the renunciation of the Crown Prince Wilhelm. However, he and SPD leader Friedrich Ebert both still hoped to retain the monarchy in face of the revolution. Max von Baden preferred a younger son of Wilhelm II to succeed to the throne. Around noon, Friedrich Ebert arrived at the Reichskanzlei and demanded that the authority to govern be handed over to him and the SPD. Max von Baden resigned and unconstitutionally made Ebert his successor as Reichskanzler (Chancellor) and Ministerpräsident of Prussia. All the Secretaries of State including Scheidemann remained in office. Ebert issued a proclamation, asking the masses on the streets to remain quiet and to go home.[3]:86–88

Ebert and Scheidemann then went to the Reichstag for lunch and sat at separate tables. A huge crowd assembled outside and there were calls for a speech. Ebert refused but Scheidemann stood up and rushed to a window facing the crowd.[3]:88–90 According to Scheidemann's own recollection, someone told him along the way that the Spartacist (communist) Karl Liebknecht intended to declare Germany a Soviet Republic.[4] Scheidemann now made a spontaneous speech, closing with the words:[4][5]:7

"The old and rotten, the monarchy has collapsed. The new may live. Long live the German Republic!"

When he returned to the Reichstag dining room, a furious Ebert confronted him. Ebert pounded the table with his fist and shouted: "You have no right to proclaim the Republic! What becomes of Germany, a Republic or whatever, that is for the constituent assembly to decide!"[3]:90

Later that day, despite Scheidemann's announcement Ebert even asked Prince Max to stay on as regent (Reichsverweser) but was refused.[3]:90 In fact, Scheidemann's speech was without legal significance. Wilhelm II had not really abdicated (although he soon left the country and did sign an abdication later in November 1918). At that point, Germany was legally still a monarchy.[3]:92 Both Ebert and Scheidemann at this point hoped to preserve the existing structure of government under a Chancellor Ebert, restore calm and deal with the pressing issue of the armistice. Yet the revolution seemed likely to force the SPD to share power with those on the far left—Spartacists and the Independents of the USPD.[3]:96 In the afternoon of 9 November, Ebert grudgingly asked the USPD to nominate three ministers for a future government.

However, a group known as Revolutionäre Obleute then forced the SPD leadership to join with the revolutionary forces. That evening a group of several hundred followers of these non-union workers' representatives occupied the Reichstag and held an impromptu debate. They called for the election of soldiers' and workers' councils the next day with an eye to name a provisional government—the Rat der Volksbeauftragten (Council of the People's Deputies).[3]:100–103 The SPD leadership managed to co-opt that process and sent three delegates to the Council set up on 10 November: Ebert, Scheidemann and Otto Landsberg. Ebert became joint Chairman with Hugo Haase of the USPD. Scheidemann was a member of the Council of the People's Deputies for its whole period of existence from 10 November 1918 to 13 February 1919.[2]

On 19 January 1919, Scheidemann was elected to the Weimar National Assembly. On 13 February 1919, newly elected provisional Reichspräsident Ebert asked Scheidemann to form the first democratically elected government of Germany. A few months later, in June, Scheidemann and his cabinet resigned in protest of the terms of the Treaty of Versailles.

In social policy, Scheidemann's time as head of government saw the adoption of a law by the National Assembly on 6 March 1919 that, in the words of one historian, "greatly modified and liberalized the code of military justice."[6] In February 1919, as a concession to the mass movement in the Ruhr at that time, the labour minister Gustav Bauer decreed the setting up of workers chambers for the mining industry.[7] On the 18th of March 1919, a regulation issued by the Demobilisation Office introduced the eight-hour workday for office employees.[8]

From June to December 1919, Scheidemann once again was a member of the SPD party executive.[2] In the elections of 6 June 1920, Scheidemann was re-elected to the Reichstag, this time for Hesse-Nassau.[1] From 1920 to 1925, Scheidemann was also mayor of Kassel.[2]

For many on the extreme right, Scheidemann had become a personification of the hated republican, democratic system. They even coined the term Scheidemänner used as a derogatory way of referring to the supporters of the Weimar Republic.[1] On 4 June 1922, he was attacked with prussic acid but escaped mostly unharmed. In December 1926 he exposed the clandestine cooperation between Reichswehr and the Red Army. Since this was in contradiction to the Treaty of Versailles, the revelation caused the resignation of the third Marx cabinet.[2]

Scheidemann remained in the Reichstag throughout the period of the Weimar Republic, writing political treatises that were widely read.[1] The Machtergreifung of the Nazi party in 1933 caused him to emigrate in early March via Salzburg, Prague, Switzerland, France and the USA to Denmark.[2] There he pseudonymously wrote articles on the political situation in Germany for Danish workers' newspapers.[1]

The Copenhagen Municipality left his ashes to Kassel in 1953.