From Infogalactic: the planetary knowledge core
Jump to: navigation, search
For the narrower field of "comparative philology", see comparative linguistics.

Philology is the study of language in written historical sources; it is a combination of literary criticism, history, and linguistics.[1] It is more commonly defined as the study of literary texts and written records, the establishment of their authenticity and their original form, and the determination of their meaning. A person who pursues this kind of study is known as a philologist.

Classical philology is the philology of Classical Sanskrit, Pali, Tamil, Greek and Latin. Historically Classical philology originated principally from the Library of Pergamum and the Library of Alexandria[2] around the 4th century BC, continued by Greeks and Romans throughout the Roman and Byzantine Empires, preserved and promoted during the Islamic Golden Age and eventually again taken up by European scholars of the Renaissance, where it was soon joined by philologies of other languages of non-Asian (European) (Germanic, Celtic), Eurasian (Slavistics, etc.) and Asian (Sanskrit, Persian, Arabic, Chinese, etc.). Indo-European studies involves the comparative philology of all Indo-European languages.

Any classical language can be studied philologically, and indeed describing a language as "classical" is to imply the existence of a philological tradition associated with it[citation needed].

Because of its focus on historical development (diachronic analysis), philology came to be used as a term contrasting with linguistics. This is due to a 20th-century development triggered by Ferdinand de Saussure's insistence on the importance of synchronic analysis, and the later emergence of structuralism and Chomskyan linguistics with its emphasis on syntax.

The term philology is derived from the Greek φιλολογία (philologia),[3] from the terms φίλος (philos), meaning "love, affection, loved, beloved, dear, friend" and λόγος (logos), meaning "word, articulation, reason", describing a love of learning, of literature as well as of argument and reasoning, reflecting the range of activities included under the notion of λόγος. The term changed little with the Latin philologia, and later entered the English language in the 16th century, from the Middle French philologie, in the sense of "love of literature".

The adjective φιλόλογος (philologos) meant "fond of discussion or argument, talkative", in Hellenistic Greek also implying an excessive ("sophistic") preference of argument over the love of true wisdom, φιλόσοφος (philosophos).

The meaning of "love of learning and literature" was narrowed to "the study of the historical development of languages" (historical linguistics) in 19th-century usage of the term. Due to the rapid progress made in understanding sound laws and language change, the "golden age of philology" lasted throughout the 19th century, or "from Giacomo Leopardi and Friedrich Schlegel to Nietzsche".[4] In the Anglo-Saxon world, the term philology to describe work on languages and literatures, which had become synonymous with the practices of German scholars, was abandoned as a consequence of anti-German feeling following World War I[citation needed]. Most continental European countries still maintain the term to designate departments, colleges, position titles, and journals. J. R. R. Tolkien opposed the nationalist reaction against philological practices, claiming that "the philological instinct" was "universal as is the use of language".[5][6] In British English usage, and in British academia, "philology" remains largely synonymous with "historical linguistics", while in US English, and US academia, the wider meaning of "study of a language's grammar, history and literary tradition" remains more widespread.[7][8] Based on the harsh critique of Friedrich Nietzsche, US scholars since the 1980s have viewed philology as responsible for a narrowly scientistic study of language and literature.[9] 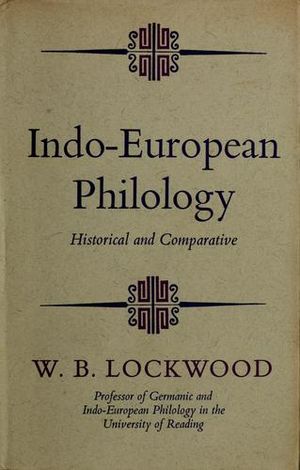 The comparative linguistics branch of philology studies the relationship between languages. Similarities between Sanskrit and European languages were first noted in the early 16th century[10] and led to speculation of a common ancestor language from which all these descended. It is now named Proto-Indo-European. Philology's interest in ancient languages led to the study of what were, in the 18th century, "exotic" languages, for the light they could cast on problems in understanding and deciphering the origins of older texts.

Philology also includes the study of texts and their history. It includes elements of textual criticism, trying to reconstruct an author's original text based on variant copies of manuscripts. This branch of research arose among Ancient scholars in the 4th century BC Greek-speaking world, who desired to establish a standard text of popular authors for the purposes of both sound interpretation and secure transmission. Since that time, the original principles of textual criticism have been improved and applied to other widely distributed texts such as the Bible. Scholars have tried to reconstruct the original readings of the Bible from the manuscript variants. This method was applied to Classical Studies and to medieval texts as a way to reconstruct the author's original work. The method produced so-called "critical editions", which provided a reconstructed text accompanied by a "critical apparatus", i.e., footnotes that listed the various manuscript variants available, enabling scholars to gain insight into the entire manuscript tradition and argue about the variants.[11]

A related study method known as higher criticism studies the authorship, date, and provenance of text to place such text in historical context.[11] As these philological issues are often inseparable from issues of interpretation, there is no clear-cut boundary between philology and hermeneutics.[11] When text has a significant political or religious influence (such as the reconstruction of Biblical texts), scholars have difficulty reaching objective conclusions.

Some scholars avoid all critical methods of textual philology,[11] especially in historical linguistics, where it is important to study the actual recorded materials. The movement known as New Philology has rejected textual criticism because it injects editorial interpretations into the text and destroys the integrity of the individual manuscript, hence damaging the reliability of the data. Supporters of New Philology insist on a strict "diplomatic" approach: a faithful rendering of the text exactly as found in the manuscript, without emendations.

Another branch of philology, cognitive philology, studies written and oral texts, considering them as results of human mental processes. This science compares the results of textual science with the results of experimental research of both psychology and artificial intelligence production systems.

In the case of Bronze Age literature, philology includes the prior decipherment of the language under study. This has notably been the case with the Egyptian, Sumerian, Assyrian, Hittite, Ugaritic and Luwian languages. Beginning with the famous decipherment and translation of the Rosetta Stone by Jean-François Champollion in 1822, a number of individuals attempted to decipher the writing systems of the Ancient Near East and Aegean. In the case of Old Persian and Mycenaean Greek, decipherment yielded older records of languages already known from slightly more recent traditions (Middle Persian and Alphabetic Greek).

Work on the ancient languages of the Near East progressed rapidly. In the mid-19th century, Henry Rawlinson and others deciphered the Behistun Inscription, which records the same text in Old Persian, Elamite, and Akkadian, using a variation of cuneiform for each language. The elucidation of cuneiform led to the decipherment of Sumerian. Hittite was deciphered in 1915 by Bedřich Hrozný.

Linear B, a script used in the ancient Aegean, was deciphered in 1952 by Michael Ventris, who demonstrated that it recorded an early form of Greek, now known as Mycenaean Greek. Linear A, the writing system that records the still-unknown language of the Minoans, resists deciphering, despite many attempts.

Work continues on scripts such as the Maya, with great progress since the initial breakthroughs of the phonetic approach championed by Yuri Knorozov and others in the 1950s. Since the late 20th century, the Maya code has been almost completely deciphered, and the Mayan languages are among the most documented and studied in Mesoamerica. The code is described as a logosyllabic style of writing, which could be used to fully express any spoken thought.

The main character in the Academy Award Nominee for Best Foreign Language film in 2012, Footnote, is a Hebrew philologist, and a significant part of the film deals with his work.

In the C.S. Lewis Space Trilogy, the main character is a philologist, Elwin Ransom.