From Infogalactic: the planetary knowledge core
(Redirected from Phlogiston)
Jump to: navigation, search 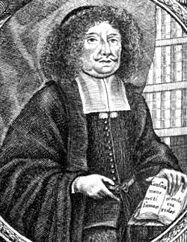 The phlogiston theory is an obsolete scientific theory that postulated that a fire-like element called phlogiston is contained within combustible bodies and released during combustion. The name comes from the Ancient Greek φλογιστόν phlogistón (burning up), from φλόξ phlóx (flame). It was first stated in 1667 by Johann Joachim Becher. The theory attempted to explain burning processes such as combustion and rusting, which are now collectively known as oxidation.

In general, substances that burned in air were said to be rich in phlogiston; the fact that combustion soon ceased in an enclosed space was taken as clear-cut evidence that air had the capacity to absorb only a finite amount of phlogiston. When air had become completely phlogisticated it would no longer serve to support combustion of any material, nor would a metal heated in it yield a calx; nor could phlogisticated air support life. Breathing was thought to take phlogiston out of the body.[1]

Joseph Black's student Daniel Rutherford discovered nitrogen in 1772 and the pair used the theory to explain his results. The residue of air left after burning, in fact a mixture of nitrogen and carbon dioxide, was sometimes referred to as phlogisticated air, having taken up all of the phlogiston. Conversely, when oxygen was first discovered, it was thought to be dephlogisticated air, capable of combining with more phlogiston and thus supporting combustion for longer than ordinary air.[2]

History of the theory

In 1667, Johann Joachim Becher published his book Physica subterranea, which was the first mention of what would become the phlogiston theory. Traditionally, alchemists considered that there were four classical elements: fire, water, air, and earth. In his book, Becher eliminated fire, water, and air from the classical element model and replaced them with three forms of earth: terra lapidea, terra fluida, and terra pinguis.[3][4] Terra pinguis was the element that imparted oily, sulphurous, or combustible properties.[5] Becher believed that terra pinguis was a key feature of combustion and was released when combustible substances were burned.[3] In 1703 Georg Ernst Stahl, professor of medicine and chemistry at Halle, proposed a variant of the theory in which he renamed Becher's terra pinguis to phlogiston, and it was in this form that the theory probably had its greatest influence.[6]

Eventually, quantitative experiments revealed problems, including the fact that some metals, such as magnesium, gained mass when they burned, even though they were supposed to have lost phlogiston. Some phlogiston proponents explained this by concluding that phlogiston had negative mass; others, such as Louis-Bernard Guyton de Morveau, gave the more conventional argument that it was lighter than air. However, a more detailed analysis based on Archimedes' principle, the densities of magnesium and its combustion product showed that just being lighter than air could not account for the increase in mass.

During the eighteenth century, as it became clear that metals gained mass when they were oxidized, phlogiston was increasingly regarded as a principle rather than a material substance.[7] By the end of the eighteenth century, for the few chemists who still used the term phlogiston, the concept was linked to hydrogen. Joseph Priestley, for example, in referring to the reaction of steam on iron, whilst fully acknowledging that the iron gains mass as it binds with oxygen to form a calx, iron oxide, iron also loses “the basis of inflammable air (hydrogen), and this is the substance or principle, to which we give the name phlogiston.”[8] Following Lavoisier’s description of oxygen as the oxidizing principle (hence its name, from Ancient Greek: oksús, “sharp”; génos, “birth”, referring to oxygen's role in the formation of acids), Priestley described phlogiston as the alkaline principle.[9]

Phlogiston remained the dominant theory until the 1780s when Antoine-Laurent Lavoisier showed that combustion requires a gas that has mass (oxygen) and could be measured by means of weighing closed vessels.[10] The use of closed vessels also negated the buoyancy that had disguised the mass of the gases of combustion. These observations solved the mass paradox and set the stage for the new caloric theory of combustion.