From Infogalactic: the planetary knowledge core
Jump to: navigation, search
This article is about phonetic transcription. For other uses, see Transcription (disambiguation).

The pronunciation of words in many languages, as distinct from their written form (orthography), has undergone significant change over time. Pronunciation can also vary greatly among dialects of a language. Standard orthography in some languages, particularly French, English, and Irish, is often irregular, and makes it difficult to predict pronunciation from spelling. For example, the words bough and through do not rhyme in English, even though their spellings might suggest they do. In French, the sequence "-ent" is pronounced /ɑ̃/ in accent, but is silent in "posent".

Other languages, such as Spanish and Italian have a more consistent—though still imperfect—relationship between orthography and pronunciation (phonemic orthography).

Therefore, phonetic transcription can provide a function that orthography cannot. It displays a one-to-one relationship between symbols and sounds, unlike traditional writing systems. Phonetic transcription allows us to step outside orthography and examine differences in pronunciation between dialects within a given language, as well as to identify changes in pronunciation that may take place over time.

For example, one particular pronunciation of the English word little may be transcribed using the IPA as /ˈlɪtəl/ or [ˈlɪɾɫ̩]; the broad, phonemic transcription, placed between slashes, indicates merely that the word ends with phoneme /l/, but the narrow, allophonic transcription, placed between square brackets, indicates that this final /l/ ([ɫ]) is dark (velarized).

The advantage of the narrow transcription is that it can help learners to get exactly the right sound, and allows linguists to make detailed analyses of language variation. The disadvantage is that a narrow transcription is rarely representative of all speakers of a language. Most Americans and Australians would pronounce the /t/ of little as a tap [ɾ]. Some people in southern England would say /t/ as [ʔ] (a glottal stop) and/or the second /l/ as [w] or something similar. A further disadvantage in less technical contexts is that narrow transcription involves a larger number of symbols that may be unfamiliar to non-specialists.

The advantage of the broad transcription is that it usually allows statements to be made which apply across a more diverse language community. It is thus more appropriate for the pronunciation data in foreign language dictionaries, which may discuss phonetic details in the preface but rarely give them for each entry. A rule of thumb in many linguistics contexts is therefore to use a narrow transcription when it is necessary for the point being made, but a broad transcription whenever possible.

Most phonetic transcription is based on the assumption that linguistic sounds are segmentable into discrete units that can be represented by symbols.

The International Phonetic Alphabet (IPA) is one of the most popular and well-known phonetic alphabets. It was originally created by primarily British language teachers, with later efforts from European phoneticians and linguists. It has changed from its earlier intention as a tool of foreign language pedagogy to a practical alphabet of linguists. It is currently becoming the most often seen alphabet in the field of phonetics.

Another commonly encountered alphabetic tradition was originally created for the transcription of Native American and European languages, and is still commonly used by linguists of Slavic, Indic, Uralic, Semitic, and Caucasian languages. This is sometimes labeled the Americanist phonetic alphabet, but this is misleading because it has always been widely used for languages outside the Americas. The difference between these alphabets and IPA is small, although often the specially created characters of the IPA are abandoned in favour of already existing characters with diacritics (e.g. many characters are borrowed from Eastern European orthographies) or digraphs.

There are also extended versions of the IPA, for example: Ext-IPA, VoQS, and Luciano Canepari's canIPA.

Other alphabets, such as Hangul, may have their own phonetic extensions. There also exist featural phonetic transcription systems, such as Alexander Melville Bell's Visible Speech and its derivatives.

The International Phonetic Association recommends that a phonetic transcription should be enclosed in square brackets "[ ]". A transcription that specifically denotes only phonological contrasts may be enclosed in slashes "/ /" instead. If one is in doubt, it is best to use brackets, for by setting off a transcription with slashes one makes a theoretical claim that every symbol within is phonemically contrastive for the language being transcribed.[citation needed]

Phonetic transcriptions try to objectively capture the actual pronunciation of a word, whereas phonemic transcriptions are model-dependent. For example, in The Sound Pattern of English, Noam Chomsky and Morris Halle transcribed the English word night phonemically as /nixt/. In this model, the phoneme /x/ is never realized as [x], but shows its presence by "lengthening" the preceding vowel. The preceding vowel in this case is the phoneme /i/, which is pronounced [aɪ] when "long". So phonemic /nixt/ is equivalent to phonetic [naɪt], but underlying this analysis is the belief that historical sounds such as the gh in night may remain in a word long after they have ceased to be pronounced, or that a phoneme may exist in a language without ever being directly expressed. (This was later rejected by both Chomsky and Halle.)[verification needed]

For example, in some dialects the English word pretzel in a narrow transcription would be [ˈpʰɹ̥ʷɛʔts.ɫ̩], which notes several phonetic features that may not be evident even to a native speaker. An example of a broad transcription is [ˈpʰɹɛts.ɫ̩], which only indicates some of the easier to hear features. A yet broader transcription would be [ˈpɹɛts.l]. Here every symbol represents an unambiguous speech sound, but without going into any unnecessary detail. None of these transcriptions make any claims about the phonemic status of the sounds. Instead, they represent certain ways in which it is possible to produce the sounds that make up the word.[citation needed]

There are also several possibilities in how to transcribe this word phonemically, but here the differences are generally not of precision, but of analysis. For example, pretzel could be /ˈprɛts.l̩/ or /ˈprets.əl/. The special symbol for English r is not used, for it is not meaningful to distinguish it from a rolled r. The second transcription claims that there are two vowels in the word, even if they can't both be heard, while the first claims there is only one.[citation needed]

However, phonemic transcriptions may also be broad or narrow, or perhaps it would be better to say abstract versus concrete. They may show a fair amount of phonetic detail, usually of a phoneme's most common allophone, but because they are abstract symbols they do not need to resemble any sound at all directly. Phonemic symbols will frequently be chosen to avoid diacritics as much as possible, under a 'one sound one symbol' policy, or may even be restricted to the ASCII symbols of a typical keyboard. For example, the English word church may be transcribed as /tʃɝːtʃ/, a close approximation of its actual pronunciation, or more abstractly as /crc/, which is easier to type. Phonemic symbols should always be explained, especially when they are as divergent from actual pronunciation as /crc/.[citation needed]

Occasionally a transcription will be enclosed in pipes ("| |"). This goes beyond phonology into morphological analysis. For example, the words pets and beds could be transcribed phonetically as [pʰɛʔts] and [b̥ɛd̥z̥] (in a fairly narrow transcription), and phonemically as /pets/ and /bedz/. Because /s/ and /z/ are separate phonemes in English, they receive separate symbols in the phonemic analysis. However, you probably recognize that underneath this, they represent the same plural ending. This can be indicated with the pipe notation. If you believe the plural ending is essentially an s, as English spelling would suggest, the words can be transcribed |pets| and |beds|. If, as most linguists would probably suggest, it is essentially a z, these would be |petz| and |bedz|.

To avoid confusion with IPA symbols, it may be desirable to specify when native orthography is being used, so that, for example, the English word jet is not read as "yet". This is done with angle brackets or chevrons: ⟨jet⟩. It is also common to italicize such words, but the chevrons indicate specifically that they are in the original language's orthography, and not in English transliteration. 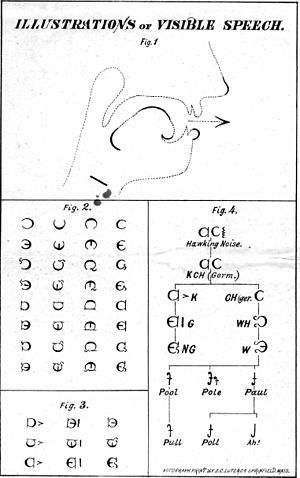 In iconic phonetic notation, the shapes of the phonetic characters are designed so that they visually represent the position of articulators in the vocal tract. This is unlike alphabetic notation, where the correspondence between character shape and articulator position is arbitrary. This notation is potentially more flexible than alphabetic notation in showing more shades of pronunciation (MacMahon 1996:838–841). An example of iconic phonetic notation is the Visible Speech system, created by Scottish phonetician Alexander Melville Bell (Ellis 1869:15).

Two examples of this type were developed by the Danish Otto Jespersen (1889) and American Kenneth Pike (1943). Pike's system, which is part of a larger goal of scientific description of phonetics, is particularly interesting in its challenge against the descriptive method of the phoneticians who created alphabetic systems like the IPA. An example of Pike's system can be demonstrated by the following. A syllabic voiced alveolar nasal consonant (/n̩/ in IPA) is notated as

In Pike's notation there are 5 main components (which are indicated using the example above):

The components of the notational hierarchy of this consonant are explained below: