The Phoney War refers to the relatively quiet eight-month period at the start of World War II between the declaration of war by the Western Allies (United Kingdom and France) against Nazi Germany on 3 September 1939 just after the Invasion of Poland and the German Blitzkrieg in May 1940, that was marked by a lack of major military land operations by the Allies on Germany's Western Front.

Even though Poland was overrun in about five weeks in the German and Soviet Invasion of Poland beginning on 1 September 1939, the Western Allies did nothing: this was the start of the Phoney War (at least as far as the United Kingdom and France were concerned). War had been declared by each side, but no Western power committed to launching a significant land offensive, notwithstanding the terms of the Anglo-Polish and Franco-Polish military alliances which obliged the United Kingdom and France to assist Poland.

The quiet of the Phoney War was punctuated by a few actions by the Allies. In the Saar Offensive in September, the French attacked Germany with the intention of assisting Poland, but this fizzled out within days and they withdrew. In November, the Soviets attacked Finland in the Winter War, resulting in much debate in France and Britain about an offensive to help Finland, but the forces finally assembled for this campaign were delayed until the Winter War ended in March. The Allied discussions about a Scandinavian campaign caused concern in Germany and resulted in the German invasion of Denmark and Norway in April, and the Allied troops previously assembled for Finland were redirected to Norway instead. Fighting there continued until June when the Allies evacuated, ceding Norway to Germany in response to the German invasion of France.

On the other side, the Germans launched attacks at sea in the fall and winter against several British aircraft carriers and destroyers, sinking several including the carrier HMS Courageous with the loss of 519 lives. Action in the air began on 16 October 1939 when the Luftwaffe launched air raids on British warships. There were various minor bombing raids and reconnaissance flights on both sides.

The term Phoney War customarily appears using the British spelling even in North America, rather than the American phony, although some American sources do not follow the trend.[1] The first known recorded use of the term in print was in September 1939 in a U.S. newspaper which used the British spelling[2] although other contemporary American reports sometimes used "phony" as both spellings were in use at the time in the U.S. The term appeared in Great Britain by January 1940[3] as "phoney", the only acceptable spelling there.

The term "Phoney War" was probably coined by US Senator William Borah who commented in September 1939 on the inactivity on the Western Front, "There is something phoney about this war."[2]

While most of the German army was engaged in Poland, a much smaller German force manned the Siegfried Line, their fortified defensive line along the French border. At the Maginot Line on the other side of the border, British and French troops stood facing them, but there were only some local, minor skirmishes, while in the air there were occasional dogfights between fighter planes. The Royal Air Force dropped propaganda leaflets on Germany and the first Canadian troops stepped ashore in Britain, while western Europe was under a period of uneasy calm for seven months. 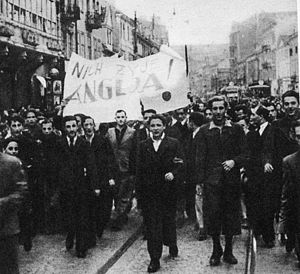 People of Warsaw outside the British Embassy with a banner which says "Long live England!" just after the British declaration of war with Nazi Germany

When Leopold Amery suggested to Kingsley Wood that the Black Forest be bombed with incendiaries to burn its ammunition dumps, Wood—the Secretary of State for Air—amazed the member of parliament by responding that the forest was "private property" and could not be bombed; neither could weapons factories, as the Germans might do the same.[8] Indeed, the sense of unreality was maintained when some British officers imported packs of foxhounds and beagles in 1939, but were thwarted by the French authorities in their attempts at introducing live foxes.[9] Civilian attitudes in Britain to their German foes were still not as intense as they were to become after the Blitz. In April 1940 a German Heinkel bomber crashed at Clacton-on-Sea in Essex, killing its crew and people on the ground. They were all laid to rest in the local cemetery which was provided with support from the Royal Air Force. Wreaths with messages of sympathy for the casualties were displayed on the coffins.[10]

Meanwhile, the opposing nations clashed in the Norwegian Campaign.

In their hurry to re-arm, Britain and France had both begun buying large amounts of weapons from manufacturers in the US at the outbreak of hostilities, thereby supplementing their own production. The non-belligerent US contributed to the Western Allies by discounted sales.[citation needed]

Despite the relative calm on land, on the high seas the war was very real. Within a few hours of the declaration of war, the British liner SS Athenia was torpedoed off the Hebrides with the loss of 112 lives in what was to be the beginning of the long running Battle of the Atlantic. On 4 September, the Allies announced a blockade of Germany to prevent her importing food and raw materials to sustain her war effort; the Germans immediately declared a counter-blockade. RAF Bomber Command, Britain's principal offensive arm, was also heavily engaged, but found that daylight bombing caused little damage and cost insupportable losses (e.g. 12 Wellington bombers shot down out of 22 sent over the Wilhelmshaven naval base on 18 December 1939.)[11]

At the Nuremberg Trials, German military commander Alfred Jodl said that "if we did not collapse already in the year 1939 that was due only to the fact that during the Polish campaign, the approximately 110 French and British divisions in the West were held completely inactive against the 23 German divisions."[12]

General Siegfried Westphal stated, that if the French had attacked in force in September 1939 the German army "could only have held out for one or two weeks."[13] 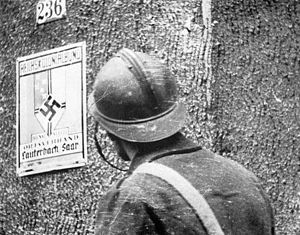 The Saar Offensive was a French attack into the Saarland defended by the German 1st Army in the early stages of World War II. Its purpose was to assist Poland, which was then under attack. However, the assault was stopped after a few kilometres and the French forces withdrew. According to the Franco-Polish military convention, the French Army was to start preparations for a major offensive three days after the beginning of mobilization. The French forces were to effectively gain control over the area between the French border and the German lines and were to probe the German defences. On the 15th day of the mobilisation (that is on 16 September), the French Army was to start a full-scale assault on Germany. The preemptive mobilisation was started in France on 26 August, and on 1 September full mobilisation was declared.

A French offensive in the Rhine river valley area (Saar Offensive) started on 7 September, four days after France declared war on Germany. Since the Wehrmacht was occupied in the attack on Poland, the French soldiers enjoyed a decisive numerical advantage along their border with Germany. However, the French took no meaningful action to assist the Poles. Eleven French divisions advanced along a 32 km (20 miles) line near Saarbrücken against weak German opposition. The attack did not result in the diversion of any German troops. The all-out assault was to have been carried out by roughly 40 divisions, including one armoured, three mechanised divisions, 78 artillery regiments and 40 tank battalions. The French Army had advanced to a depth of 8 km (5.0 miles) and captured about 20 villages evacuated by the German army, without any resistance. However, the half-hearted offensive was halted after France seized the Warndt Forest, 7.8 km2 (3.0 sq mi) of heavily mined German territory.

On 12 September, the Anglo-French Supreme War Council gathered for the first time at Abbeville. It was decided that all offensive actions were to be halted immediately as the French opted to fight a defensive war, forcing the Germans to come to them. By then, the French divisions had advanced approximately 8 km (5.0 miles) into Germany on a 24-kilometre (15-mile) long strip of the frontier in the Saarland area. General Maurice Gamelin, ordered his troops to stop no closer than 1 km (0.62 miles) from the German positions along the Siegfried Line. Poland was not notified of this decision. Instead, Gamelin informed Marshal Edward Rydz-Śmigły that ​1⁄2 of his divisions were in contact with the enemy and that French advances had forced the Wehrmacht to withdraw at least six divisions from Poland. The following day, the commander of the French Military Mission to Poland, General Louis Faury, informed the Polish Chief of Staff—General Wacław Stachiewicz—that the major offensive on the western front planned from 17–20 September had to be postponed. At the same time, French divisions were ordered to withdraw to their barracks along the Maginot Line, beginning the Phoney War.

A notable event during the Phoney War was the Winter War, which started with the Soviet Union′s assault on Finland on 30 November 1939. Public opinion, particularly in France and Britain, found it easy to side with democratic Finland, and demanded from their governments effective action in support of "the brave Finns" against their much larger aggressor, the Soviet Union, particularly since the Finns' defense seemed so much more successful than that of the Poles during the September Campaign.[citation needed] As a consequence of its attack, the Soviet Union was expelled from the League of Nations, and a proposed Franco-British expedition to northern Scandinavia was much debated. British forces that began to be assembled to send to Finland's aid were not dispatched before the Winter War ended, and were sent to Norway′s aid in the Norwegian campaign, instead. On 20 March, after the Winter War had ended, Édouard Daladier resigned as Prime Minister of France, due (in part) to his failure to aid Finland's defence.

German invasion of Denmark and Norway

The open discussions on an Allied expedition to northern Scandinavia, also without the consent of the neutral Scandinavian countries, and the Altmark Incident on 16 February, alarmed the Kriegsmarine and Germany by threatening iron ore supplies and gave strong arguments for Germany securing the Norwegian coast. Codenamed Operation Weserübung, the German invasion of Denmark and Norway commenced on 9 April. From the 14th, Allied troops were landed in Norway, but by the end of the month, southern parts of Norway were in German hands. The fighting continued in the north until the Allies evacuated in early June in response to the German invasion of France; the Norwegian forces in mainland Norway laid down their arms at midnight on 9 June. 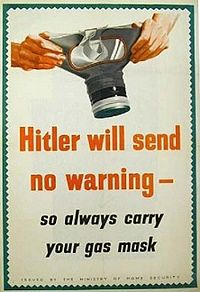 The débâcle of the Allied campaign in Norway, which was actually an offspring of the never-realised plans to aid Finland, forced a famous debate in the House of Commons during which the British Prime Minister Neville Chamberlain was under constant attack. A nominal vote of confidence in his government was won by 281 to 200, but many of Chamberlain′s supporters had voted against him while others had abstained. Chamberlain found it impossible to continue to lead a National Government or to form a government of national unity (in Britain often called a "coalition government", to distinguish it from Chamberlain's existing national government), around himself. On 10 May Chamberlain resigned the premiership whilst retaining the leadership of the Conservative Party. The King—George VI—appointed Winston Churchill—who had been a consistent opponent of Chamberlain's policy of appeasement—as his successor, and Churchill formed a new coalition government that included members of the Conservatives, Labour and the Liberal Party as well as several ministers from a non-political background.

Actions during the Phoney War

Most other major actions during the Phoney War were at sea, including the Second Battle of the Atlantic fought throughout the Phoney War. Other notable events among these were:

On 10 May 1940, eight months after Britain and France had declared war on Germany, German troops marched into Belgium, the Netherlands and Luxembourg, marking the end of the Phoney War.