This article describes those aspects of the phonological history of the English language which concern consonants.

The voiceless stops /p/, /t/, /k/ are typically aspirated when they begin a stressed syllable, becoming [pʰ], [tʰ], [kʰ], as described under English phonology (obstruents). There is some regional variation in the degree of aspiration, and in some Scottish and northern English accents aspiration does not occur at all.[1]

In certain accents, such as Geordie (among younger women)[2] and in some speakers of Dublin English,[3] /p/, /t/ and /k/ can be preaspirated when they come at the end of a word or utterance, becoming [ʰp], [ʰt], [ʰk].

Flapping, or tapping, is a process whereby /t/ or /d/ is pronounced as the alveolar flap [ɾ] in certain positions, especially between vowels (but also sometimes after other sonorants). It may be perceived as, for example, the pronunciation of butter as "budder". It occurs especially in North American English (to varying extents) and in Australian and New Zealand English.

Apart from the T-voicing that results from flapping (described above), some dialects feature other instances of voicing or lenition of the stops /p/, /t/ and /k/. In Geordie, these stops may be fully voiced ([b], [d], [ɡ]) in intervocalic position.[2] In Devon, stops and other obstruents may be voiced (or at least lenited) between vowels and when final after a weak vowel, so for example the /k/ and /t/ in jacket may approach the realizations [g] and [d], making the word sound similar or identical to jagged.[4]

Stops, chiefly the voiceless stops, and especially /t/, are frequently glottalized or pre-glottalized in certain positions; that is, a stop may be replaced with the glottal stop [ʔ], or else a glottal stop may be inserted before it. These phenomena are strongly dependent on the phonetic environment and on dialect. For details, see T-glottalization, as well as English phonology (obstruents) and glottalization in consonant clusters.

If all final voiceless stops are glottalized, as may occur in some London speech, then sets of words such as lick, lit and lip may become homophones, pronounced [lɪʔ].[5]

H-dropping is the omission of initial /h/ in words like house, heat and hangover. It is common in many dialects, especially in England, Wales, Australia and Jamaica, but is generally stigmatized, and is not a feature of the standard accents. The /h/ is nonetheless frequently dropped in all forms of English in the weak forms of function words like he, him, her, his, had and have. The opposite of H-dropping, called H-insertion or H-adding, may arise as a hypercorrection by typically H-dropping speakers, or as a spelling pronunciation.

Loss of velar and palatal fricatives

The voiceless velar and palatal fricative sounds [x] and [ç], considered to be allophones of /h/, and reflected by the ⟨gh⟩ in the spelling of words such as night, taught and weight, were lost in later Middle English or in Early Modern English. Their loss was accompanied by certain changes in the previous vowels. In some cases [x] became /f/, as in laugh.

An /x/ is still heard in words of the above type in certain Scots and northern English traditional dialect speech. An /x/ is more commonly heard – especially in the Celtic countries, but also for many speakers elsewhere – in the word loch and in certain proper names such as Buchan.

For details of the above phenomena, see H-loss (Middle English). See also the vocalization of the voiced velar fricative [ɣ].

Also in the Middle English period, the voiced affricate /dʒ/ took on phonemic status (in Old English it is considered to have been an allophone of /j/). It occurred in Middle English not only in words like brigge ("bridge"), in which it had been present in Old English, but also in French loans such as juge ("judge") and general.

After the Middle English period, a fourth voiced fricative, /ʒ/, developed as a phoneme (alongside the voiceless /ʃ/). This arose from yod-coalescence (/zj/→/ʒ/) in words like measure, and from late French loans such as rouge and beige.[6]

As noted above, the Old English phoneme /θ/ split into two phonemes in early Middle English: a voiceless dental fricative /θ/ and a voiced dental fricative/ð/. Both continued to be spelt ⟨th⟩.

Certain English accents feature variant pronunciations of these sounds. These include fronting, where they merge with /f/ and /v/ (found in Cockney and some other dialects); stopping, where they approach /t/ and /d/ (as in some Irish speech); alveolarization, where they become /s/ and /z/ (in some African varieties); and debuccalization, where /θ/ becomes [h] before a vowel (found in some Scottish English). 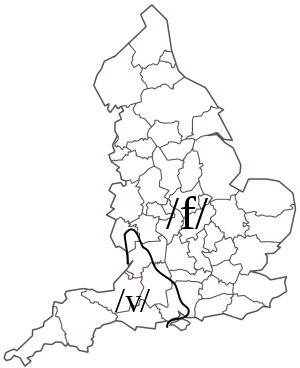 The initial consonant in the word finger in traditional dialects of England.

Initial fricative voicing is a process that occurs in some traditional accents of the English West Country, where the fricatives /f/, /θ/, /s/ and /ʃ/ are voiced to [v], [ð], [z] and [ʒ] when they occur at the beginning of a word. (Words beginning /θr/, like three, develop /dr/ instead.) In these accents, sing and farm are pronounced [zɪŋ] and [vɑːɻm]. The phenomenon is well known as a stereotypical feature, but is now rare in actual speech.[7] Some such pronunciations have spread from these dialects to become standard usage: the words vane, vat and vixen all had initial /f/ in Old English (fana, fæt, fyxen).[8]

A similar phenomenon occurred in both German and Dutch.

Insertion and deletion of /j/ and /w/

In parts of the west and southwest of England, initial /w/ may be dropped in words like wool and woman; occasionally, though, a /w/ may be inserted before certain vowels, as in "wold" for old and "bwoiling" for boiling. Similarly, initial /j/ may be lost in words like yeast and yes (this has also been reported in parts of eastern England), and may be added in words like earth (making "yearth").[18]

For the much more widespread deletion of /j/ in consonant clusters, see yod-dropping (and compare also yod-coalescence and yod-rhotacization). For the historical loss of /w/ in such words as who and write, see pronunciation of wh and reduction of /wr/.

Old and Middle English /r/ was historically pronounced as an alveolar trill, [r]. At some time between later Middle English and Early Modern English, it changed to an alveolar approximant, [ɹ], in the standard accents. Some Scottish speakers, however, retain the original trilled ("rolled") /r/.[19]

Another possible realization of /r/ is the alveolar tap, [ɾ]. This is common (alongside [ɹ]) in Scotland, and is also found in certain other accents, chiefly in positions between vowels or between a consonant and a vowel – this occurs, for example, in some Liverpool English and in some upper-class RP.[20] (This should not be confused with the tap pronunciation of /t/ and /d/, found especially in North America.)

In most General American, /r/ is [ɹ] before a vowel, but when not followed by a vowel is generally realized as an r-colored vowel, [ɚ], or as r-coloring on the preceding vowel. In many accents of English, including RP, /r/ is lost altogether when not followed by a vowel – for this, see rhoticity in English (and for related phenomena, linking and intrusive R). For vowel changes before /r/, see English-language vowel changes before historic /r/.

A uvular realization of /r/, the "Northumbrian burr", is used by some speakers in the far north of England.

A relatively recent innovation in the southeast of England, possibly originating from Cockney, is the use of a labiodental approximant, [ʋ], for /r/.[19] To some listeners this can sound like a /w/. In Hong Kong English, /r/ may be pronounced the same as /w/ at the beginning of a word, making pairs like wing and ring homophones.[21] In Singaporean English (and in stereotypical imitations of English spoken by Chinese) /r/ is often pronounced like /l/, making rip sound like lip.

Velarization of /l/ in positions where there is no vowel following, producing a "dark L", is a phenomenon that goes back to Old English times.[22] Today there is much variation between dialects as regards the degree and distribution of this velarization; see English phonology (sonorants).

In Early Modern English, in many words in which a dark /l/ followed the vowel /a/ or /o/, the /l/ either disappeared or underwent vocalization, usually with some kind of diphthongization or compensatory lengthening of the preceding vowel. This affected:

As noted under some of the points above, /l/ may be reintroduced in some of the words from which it has been lost, as a spelling pronunciation. This happens sometimes in Irish English, where for example Dundalk may be pronounced /dʌndɔːlk/ (in standard English the ⟨l⟩ is silent).

The /l/ has also been lost in the words would and should. The word could was never pronounced with /l/; its spelling results from analogy with the former words.

Modern L-vocalization (the replacement of "dark" /l/ with a non-syllabic vowel sound, usually similar to [ʊ] or [o]) is a feature of certain accents, particularly in London English and in near-RP speech that has been influenced by it ("Estuary English"), in some New York speech, in the American South and African American Vernacular English (AAVE), and according to some reports in New Zealand English.[23] Also in AAVE and some southern American accents, L-dropping may occur when the /l/ sound comes after a vowel and before a labial consonant in the same syllable, causing pronunciations like /hɛp/ for help and /sɛf/ for self.[24]

In some accents around Bristol, "intrusive L" is found, where an /l/ is inserted at the end of words ending in schwa, like comma and idea. This is now stigmatized and rare. The name Bristol itself was formerly Bristow.[25]

In some modern English accents, significant pre-L breaking occurs when /l/ follows certain vowels (/iː/, /uː/, and diphthongs ending [ɪ] or [ʊ]). Here the vowel develops a centering offglide (an additional schwa) before the /l/. This may cause reel to be pronounced like real, and tile, boil and fowl to rhyme with dial, royal and vowel. Wells considers this breaking to be a feature of midwestern General American, as well as New York English.[26] Similar pre-L schwa-insertion may also occur after /r/ (in rhotic accents), leading to pronunciations like [ˈwɜɹəld] for world.

For some Hong Kong English speakers, the phonemes /l/ and /n/ appear to merge at the start of a syllable, with [l] and [n] being in free variation in this position.[12]

Most varieties of English don't have full devoicing of final voiced obstruents. Nevertheless, voiced obstruents are partially devoiced in final position in English, especially when phrase-final or when followed by a voiceless consonant (for example, bad cat [bæd̥ kʰæt]). The most salient distinction between bad and bat is not the voicing of the final consonant but rather the duration of the vowel and possible glottalization of final [t]: bad is pronounced [bæːd̥] while bat is [bæ(ʔ)t].

Final consonant deletion is the nonstandard deletion of single consonants in syllable-final position occurring for some AAVE speakers[24] resulting in pronunciations like:

When final nasal consonants are deleted, nasality is maintained on the preceding vowel. When voiced stops are deleted, length of the preceding vowel is maintained. Consonants remaining from reduced final clusters may be eligible for deletion. The deletion occurs especially if the final consonant is a nasal or a stop. Final-consonant deletion is much less frequent than the more common final-cluster reduction.

Consonants can also be deleted at the end of a morpheme boundary, leading to pronunciations like [kɪːz] for kids.