The phonology of the low back vowels of the English language has undergone changes both overall and with regional variations, through Old and Middle English to the present. The sounds heard in modern English were significantly influenced by the Great Vowel Shift, as well as more recent developments such as the cot–caught merger.

In the Old English vowel system the vowels in the low back area were unrounded: /ɑ/, /ɑː/. There were also rounded back vowels of mid-height: /o/, /oː/. The corresponding spellings were ⟨a⟩ and ⟨o⟩, with the length distinctions not normally marked; in modern editions of Old English texts the long vowels are often written ⟨ā⟩, ⟨ō⟩.

As the Old English (OE) system developed into that of Middle English (ME), the OE /ɑ/ merged with the fronted /æ/ to become a more central ME /a/. Meanwhile, OE /ɑː/ was rounded and raised to ME /ɔː/. OE /o/ remained relatively unchanged, becoming a short ME vowel regarded as /o/ or /ɔ/, while OE /oː/ became ME /oː/ (a higher vowel than /ɔː/). A number of alternative developments were also possible; see English historical vowel correspondences for details.

Later, due to ME open syllable lengthening, the short vowel normally changed to /ɔː/ in open syllables. Remaining instances of the short vowel also tended to become lower. Hence in Late Middle English (around 1400) the following low back vowels were present, distinguished by length:[1]

By 1700 the following further developments had taken place:[2]

This left the language with three low back vowels:

Alongside the rounded low back vowels listed above, an unrounded /ɑː/ developed, found in words like start, father and palm.

Due to its somewhat opener pronunciation, the short vowel of lot in modern RP has come to be transcribed /ɒ/. Meanwhile the longer vowels of both more and cause have become /ɔː/ (but see horse–hoarse merger). In General American the lot vowel has become unrounded and merged into /ɑː/ (the father–bother merger), while in RP the lot–cloth split has not taken hold, meaning that words in the cloth set are now usually pronounced /ɒ/.

The father–bother merger or lot–palm merger is the result of a process by which the short vowel of lot was unrounded and also lengthened somewhat, to become merged with the /ɑː/ of father and palm. The merger occurs in General American and most other varieties of North American English. Linguists disagree as to whether the unrounding of the lot vowel was an American innovation (probably occurring around the end of the 17th century) or was imported from certain types of speech current in Britain at that time. In the present day, unrounded lot is also found in Irish English, much of the Caribbean, and in Norwich, the West Country and the West Midlands of England – in these accents, however, it typically remains short and so does not merge with the longer vowel of father and palm.[6]

In those accents with the merger father and bother rhyme, Kahn and con are homophonous as [kʰɑ(ː)n], and Saab and sob are homophonous as [sɑ(ː)b]. Balm and bomb may also be homophones as [bɑ(ː)m]; however this merger is prevented for some speakers by the reintroduction of the historical l into balm.[7] Another possible merger is lager and logger, though not for speakers for whom the lot–cloth split extends to -og words like log.[8] Exceptions to the merger in North America are accents in northeastern New England, such as the Boston accent (where lot remains rounded, and merges instead with cloth and thought), and some accents of New York City (where lot is nevertheless unrounded, and the opposition with the /ɑː/-type vowel is somewhat tenuous).[9][10]

The lot–cloth split is the result of a late 17th century sound change that lengthened /ɒ/ to [ɒː] before voiceless fricatives, and also before /n/ in the word gone. In some accents, the lengthened [ɒː] was raised, merging with the /ɔː/ of words like thought. The sound change is most consistent in the last syllable of a word, and much less so elsewhere (see below). Some words that entered the language later, especially when used more in writing than speech, are exempt from the lengthening, e.g. joss and Goth with the short vowel. Similar changes took place in words with ⟨a⟩; see trap–bath split.

The cot–caught merger, discussed below, has removed the distinction in some dialects, and may make the lot-cloth split less noticeable.

As a result of the lengthening and raising, in the above-mentioned accents cross rhymes with sauce, and soft and cloth also have the vowel /ɔː/. Accents affected by this change include American English and, originally, RP, although today words of this group almost always have short /ɒ/ in RP. The split still exists in some older RP speakers, including Queen Elizabeth II.

The lengthening and raising generally happened before the fricatives /f/, /θ/ and /s/. In American English the raising was extended to the environment before /ŋ/ and /ɡ/, and in a few words before /k/ as well, giving pronunciations like /lɔŋ/ for long, /dɔɡ/ for dog and /tʃɔklɨt/ for chocolate. (Obviously, in accents of American English that are subject to the cot–caught merger, there is no difference between words that did and those that did not undergo the change.)

In the varieties of American English that have the lot–cloth split, the lot vowel is usually symbolized as /ɑ/ and the cloth vowel as /ɔ/, since the distinction is usually one of vowel quality rather than length. The actual pronunciation of these vowels may vary somewhat from the symbol used to denote them; e.g. /ɔ/ is often pronounced closer to a low back rounded vowel [ɒ], and /ɑ/ is sometimes fronted to a low central vowel [ä]. Some words vary as to which vowel they have. For example, words that end in -og like frog, hog, fog, log, bog etc. have /ɑ/ rather than /ɔ/ in some accents.

There are also significant complexities in the pronunciation of written o occurring before one of the triggering phonemes /f θ s ŋ ɡ/ in a non-final syllable. Normally, when a word is formed by adding a suffix to an existing word, the vowel quality is maintained. Hence /ɔ/ occurs in crossing, crosser, crosses because it occurs in cross; likewise in longing, longer, longest because it occurs in long. In words not formed this way, however, the phoneme /ɑ/ tends to occur even before a triggering phoneme. For example, possible, jostle, impostor, profit, Gothic, bongo, Congo, and boggle all have /ɑ/.[11] But there are numerous exceptions (e.g. Boston with /ɔ/), including across apparent rhyming pairs (e.g. roster with /ɑ/ but foster often with /ɔ/), as well as a good deal of variation (coffee, offer, donkey, soggy, boondoggle, etc. with either /ɑ/ or /ɔ/, depending on the speaker).[11]

The word gone usually has /ɔ/ in accents with the lot–cloth split, but has /ɑ/ in accents of New York and New Jersey which have the split.

The word on is pronounced with /ɑ/ in the North, but with /ɔ/ in the Midland, Mid-Atlantic and South. 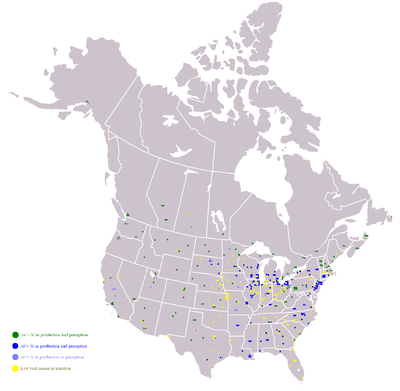 The cot–caught merger (also known as the low back merger) is a phonemic merger, a sound change, that occurs in the open and open-mid back vowels of many English accents.

The shift causes the vowel sound in words like cot, nod, and stock (most commonly represented in the International Phonetic Alphabet as

The presence of the merger and its absence are both found in many different regions of the North American continent, where it has been studied most in-depth, and in both urban and rural environments. The symbols traditionally used to transcribe the vowels in the words cot and caught as spoken in American English are /ɑ/ and /ɔ/, respectively, although their precise phonetic values may vary, as does the phonetic value of the merged vowel in the regions where the merger occurs.

According to Labov, Ash, and Boberg,[10] the merger does not generally occur in the southern United States (with exceptions), along most of the American side of the Great Lakes region, or in the "Northeast Corridor" extended metropolitan region from Providence, Rhode Island to Baltimore.

The distribution of the merger is complex, even without taking into account the mobility of the American population; there are pockets of speakers with the merger in areas that lack it, and vice versa. There are areas where the merger has only partially occurred, or is in a state of transition. For example, based on research directed by William Labov (using telephone surveys), younger speakers in Kansas, Nebraska, and the Dakotas exhibit the merger while speakers older than 40 typically do not.[19] The 2003 Harvard Dialect Survey,[20] in which subjects did not necessarily grow up in the place they identified as the source of their dialect features, indicates that there are speakers of both merging and contrast-preserving accents throughout the country, though the basic isoglosses are almost identical to those revealed by Labov's 1996 telephone survey. Both surveys indicate that approximately 60% of American English speakers preserve the contrast, while approximately 40% make the merger, although in a more recent interview, Labov stated that "Half of this country has a merger of the word classes, cot, caught, don, dawn, hock, hawk."[21]

For merged speakers in Canada and much of the United States, the two sounds [ɑ] and [ɔ] are allophones; they often do not perceive differences in their usage, hear neither of them as a separate phoneme, and hear the distinct vowels used by speakers whose dialects do distinguish them as variations on the same vowel. They hear the broad A of British Received Pronunciation as the same, single vowel sound. But in Received Pronunciation, there are three sounds distinguished: the long /ɑː/ of cart, the long /ɔː/ of caught, and the short rounded /ɒ/ of cot.

In the Mid-Atlantic U.S. dialect, most famously spoken in metropolitan Philadelphia and Baltimore, the single word on has the same vowel as dawn, dog and boss (in the mid-Atlantic, this is [ɔə~oə]), but not the same vowel as dock, don, dot, dodge, etc. ([ɑ~ä]). In this dialect, in other words, on and pawn rhyme perfectly, but odd and pawed do not rhyme at all. Labov et al. regard this phenomenon as occurring not just in the Mid-Atlantic region, but in all regions south of a geographic boundary that they identify as the ON line, which is significant because it distinguishes most varieties of Northern American English (in which "on" and "Don" are closer rhymes) from most varieties of Midland and Southern American English (in which "on" and "dawn" are closer rhymes).[22]

Labov et al. also reveal that, for about 15% of respondents,[citation needed] a specific /ɒ/–/ɔ/ merger before /n/ but not before /t/ (or other consonants) is in effect, so that Don and dawn are homophonous, but cot and caught are not. In this case, a distinct vowel shift (which overlaps with the cot–caught merger for all speakers who have indeed completed the cot–caught merger) is taking place, identified as the Don–dawn merger.[23]

The thought–goat merger is a merger of the English vowels /ɔː/ and /oʊ/ that occurs in many female speakers of Geordie.[24] It has also been reported as a possibility in some Northern Welsh accents.[25]