In Spanish dialectology, the terms distinción, seseo and ceceo are used to describe the opposition between dialects that distinguish the phonemes /θ/ and /s/ (distinción), and those that exhibit merger of the two sounds (neutralización) into either /s/ (seseo) or [s̄], a sibilant fricative similar to /θ/ (ceceo).

Distinction (Spanish: distinción) refers to the differentiated pronunciation of the two Spanish phonemes written ⟨s⟩ and ⟨z⟩ or ⟨c⟩ (only before ⟨e⟩ or ⟨i⟩, the so-called "soft" ⟨c⟩):

This pronunciation is the standard on which Spanish orthography was based, and it is universal in Central and Northern parts of Spain, except for some bilingual speakers of Catalan and Basque, according to Hualde (2005). Thus, in Spanish the choice between the spellings ⟨sa⟩, ⟨se⟩, ⟨si⟩, ⟨so⟩, ⟨su⟩ and ⟨za⟩, ⟨ce⟩, ⟨ci⟩, ⟨zo⟩, ⟨zu⟩ is determined by the pronunciation in most of Spain, unlike English, where it is often done according to etymology or orthographic conventions (although in English, soft c is always /s/ and never /z/ like s is, as with "rise" vs. "rice").

In many other Spanish-speaking regions and countries, however, the phonemic distinction between /s/ and /θ/ has been neutralized or merged. These varieties of Spanish are sometimes said to exhibit neutralización ('neutralization') as opposed to distinción. In this case, their pronunciation may or may not coincide with the English pronunciation. 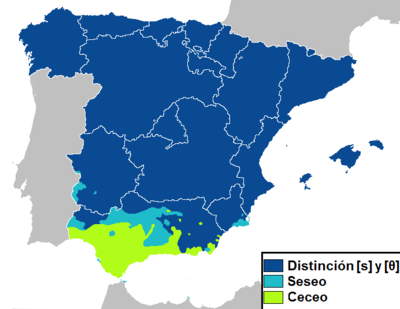 Regions of Iberian Spain with different approaches to pronunciation.

Ceceo is a phenomenon found in a few dialects of southern Spain in which the historical phonemes /s/ and /θ/ are both realized as [s̄], a sibilant sounding somewhat like [θ], but not identical.[1] Ceceo is found primarily in some varieties of Andalusian Spanish, although Hualde reports that there is some evidence of it in parts of Central America. It is a largely rural pronunciation and is often stigmatized.[2] Note that although these dialects make no distinction between the letters ⟨s⟩ and ⟨c⟩/⟨z⟩, they are never pronounced as in English in this case.

Seseo is the merger in the opposite direction: the original phonemes /s/ and /θ/ are both pronounced as [s]. Seseo is the most widespread pronunciation among Spanish speakers worldwide and occurs in nearly all speakers in Hispanic America. While it is a minority pronunciation in Spain itself, seseo is considered standard in all varieties of Latin American Spanish. It coexists with distinción and ceceo in parts of Spain (e.g. in Canary Islands and in some areas of Andalusia). Traditional dialect atlases (e.g., Alvar (1991)) show one variant or another used in adjacent regions. In Spain, seseo is considered "more socially acceptable or perhaps 'less substandard' than ceceo."[3]

The following table gives an example of the three pronunciation patterns discussed so far:

Many speakers of ceceo and seseo dialects in Spain show sociolinguistic variation in usage. In some cases, this variation may arise when a ceceo or seseo speaker more or less consciously attempts to use distinción in response to sociolinguistic pressure (hypercorrection). However, as, for instance, in the case of the variation between the standard velar nasal and alveolar pronunciation of the nasal in -ing in English (walking versus walkin'), the switching may be entirely unconscious. It is perhaps evidence of the saliency of three-way ceceo-seseo-distinción variation that inconsistent use has elicited evaluative comments by some traditional Spanish dialectologists. For instance, Dalbor (1980) discussed it as "sporadic or chaotic switching [between /s/ and /θ/] and the use of intermediate sounds impossible to determine with precision".[4] Obaid (1973) proposes the synonymous terms ceseo and seceo to refer to these "mixed" patterns, and notes surprise at a speaker who produced all four possible pronunciations of Zaragoza within the space of a few minutes.[5] In fact, sociolinguistic variation is typically highly structured in terms of how often each variant will appear given various social and linguistic independent variables. The Spanish spoken by the inhabitants of the Canary Islands is exclusively seseante, but exclusive sesante Speakers in mainland Spain are quite rare, even in areas listed as being majority seseante areas, such as Seville. However, small numbers of seseante speakers exist in mainland Spain, two examples in the public eye being the rappers Haze [1] and Zatu [2], both of whom are from Seville. 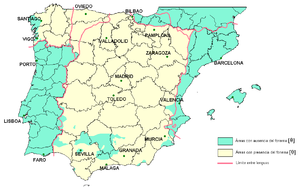 Map showing the presence or absence of /θ/ in the Iberian Peninsula. Areas in light green are either seseo zones for Spanish and Galician or areas where other languages without the [s] / [θ] contrast are spoken.

A persistent urban legend claims that the prevalence of the sound /θ/ in Spanish can be traced back to a Spanish king who spoke with a lisp, and whose pronunciation spread by prestige borrowing to the rest of the population. This myth has been discredited by scholars for lack of evidence.[6] Lundeberg (1947) traces the origins of the legend back to a chronicle of Pero López de Ayala stating that Peter of Castile "lisped a little" ("ceceaba un poco"). The timeline is totally incorrect, however: he reigned in the 14th century, but the sound /θ/ began to develop only in the 16th century (see below). Moreover, it is clear that a true lisp would not give rise to the systematic distinction between /s/ and /θ/ that characterizes Standard Peninsular pronunciation. For example, a lisp would lead one to pronounce both siento "I feel" and ciento "hundred" the same (as [θjento]) whereas in Standard Peninsular Spanish they are pronounced [sjento] and [θjento], respectively.

For native speakers of seseo varieties of Spanish, in which /θ/ is absent, the presence of this phoneme in European speakers does not appear strange. However, it might be striking for learners of Spanish in North America, where people are more familiar with seseo pronunciation, and indeed gives an impression of "lispiness". The misnomer "Castilian lisp" is used occasionally to refer to this aspect of Peninsular pronunciation (in both distinción and ceceo varieties).

In the 15th century, Spanish had developed a large number of sibilant phonemes: seven by some accounts,[7] eight by others[8] (depending on whether /d͡ʒ/ and /ʒ/ are considered contrasting)—in either case, more than any present-day variety of the language. During the 16th and early 17th centuries these phonemes merged differently as they evolved into those of the different modern dialects.[9][10] There were four pairs of voiceless versus voiced sibilants: dental/alveolar affricates /t͡s/ vs. /d͡z/ (spelled ⟨c⟩ or ⟨ç⟩ vs. ⟨z⟩); dental/alveolar fricatives /s/ (spelled ⟨ss⟩ when intervocalic, ⟨s⟩ otherwise) vs. /z/ (intervocalic only, spelled ⟨s⟩); postalveolar affricates /t͡ʃ/ (spelled ⟨ch⟩ vs. /d͡ʒ/; and postalveolar fricatives /ʃ/ (spelled ⟨x⟩) vs. /ʒ/. Both /d͡ʒ/ and /ʒ/ were spelled ⟨g⟩ before ⟨e⟩ or ⟨i⟩), and ⟨j⟩ elsewhere. It is likely that /d͡ʒ/ deaffricated and merged with /ʒ/ before the year 1500.[11] The main difference between the prestige dialect of north central Spain and dialects to the south (such as Andalusian Spanish) was that, in the north, the dental/alveolar continuants were more retracted than the affricates (the former pair can be represented as /s̺/ and /z̺/ and the latter as /t͡s̪/ and /d͡z̪/), keeping their phonemic distinction, while in the south they were homorganic.[12] The first step away from that system was the deaffrication of /d͡z̪/ in the first quarter of the 16th century. Because of a differing place of articulation, this still contrasted with /z̺/ in the prestige dialect of north central Spain, though it was a complete merger for southern dialects.[13]

The second step was the devoicing of voiced sibilants.[13] In the north, /z̺/ and /ʒ/ were lost, though /z̪/ remained contrastive as there had been no voiceless /s̪/. This sound contrasted with two acoustically similar sounds: dentoalveolar /t͡s̪/ and apicoalveolar /s̺/. By 1600, /t͡s̪/ had deaffricated and merged with /s̪/.[13] Subsequent changes to the sound system of Spanish retained the contrasts while enhancing the segments by increasing articulatory distance amongst their rather subtle acoustic contrasts, an appropriate step due to the high productivity of these phonemes in differentiating frequently used minimal pairs. The dentoalveolar one was moved "forward" to interdental /θ̟/, losing its former sibilance in the process (which increased its acoustic distance to the remaining sibilant ⟨s⟩), and the prepalatal one was moved "backward" to velar /x/ also losing its former sibilance. All in all resulting in the three-way distinction found in modern Standard Peninsular pronunciation:

In the south, the devoicing process and deaffrication of /t͡s/ gave rise to new fricatives that were indistinguishable from the existing ones. The process of increasing articulatory distance still applied, however, and /ʃ/ retracted to /x/ in the south just as it did in the north.[9] In a number of ceceo areas (particularly the southernmost provinces like Cádiz) /s/ developed into a non-sibilant apico-dental [θ̺], perceptually similar to the interdental /θ̟/ used by Standard Peninsular speakers for orthographic ⟨c⟩/⟨z⟩. In seseo areas (particularly in the westernmost provinces like Seville and Huelva), the resulting phoneme developed a predorsal alveolar realization [s̻] (like English ⟨s⟩), perceptually similar to the apicoalveolar [s̺] used by Standard Peninsular speakers for orthographic ⟨s⟩. This seseo variety was the pronunciation that most impacted Latin America, as many emigrants to the Americas were from Andalusian and Canarian ports. In addition, several generations of Spanish speakers had lived and grown in the Americas before /θ/ appeared in Castilian.[14]

The development of the sibilants in Ladino (which split off from Castilian and other Peninsular varieties in the 15th century) was more conservative, resulting in a system closer to that of Portuguese.[15]