Phylogenetics /faɪloʊdʒɪˈnɛtɪks/ (Greek: φυλή, φῦλον - phylé, phylon = tribe, clan, race + γενετικός - genetikós = origin, source, birth)[1] – in biology – is the study of the evolutionary history and relationships among individuals or groups of organisms (e.g. species, or populations). These relationships are discovered through phylogenetic inference methods that evaluate observed heritable traits, such as DNA sequences or morphology under a model of evolution of these traits. The result of these analyses is a phylogeny (also known as a phylogenetic tree) – a hypothesis about the history of evolutionary relationships.[2] The tips of a phylogenetic tree can be living organisms or fossils. Phylogenetic analyses have become central to understanding biodiversity, evolution, ecology, and genomes.

Taxonomy is the classification, identification and naming of organisms. It is usually richly informed by phylogenetics, but remains a methodologically and logically distinct discipline.[3] The degree to which taxonomies depend on phylogenies (or classification depends on evolutionary development) differs depending on the school of taxonomy: phenetics ignores phylogeny altogether, trying to represent the similarity between organisms instead; cladistics (phylogenetic systematics) tries to reproduce phylogeny in its classification without loss of information; evolutionary taxonomy tries to find a compromise between them.

Construction of a phylogenetic tree

Usual methods of phylogenetic inference involve computational approaches implementing the optimality criteria and methods of parsimony, maximum likelihood (ML), and MCMC-based Bayesian inference. All these depend upon an implicit or explicit mathematical model describing the evolution of characters observed.

Phenetics, popular in the mid-20th century but now largely obsolete, uses distance matrix-based methods to construct trees based on overall similarity in morphology or other observable traits (i.e. in the phenotype, not the DNA), which was often assumed to approximate phylogenetic relationships.

Prior to 1990, phylogenetic inferences were generally presented as narrative scenarios. Such methods are often ambiguous and lack explicit criteria for evaluating alternative hypotheses.[4][5][6]

The term "phylogeny" derives from the German Phylogenie, introduced by Haeckel in 1866,[7] and the Darwinian approach to classification became known as the "phyletic" approach.[8]

During the late 19th century, Ernst Haeckel's recapitulation theory, or "biogenetic fundamental law", was widely accepted. It was often expressed as "ontogeny recapitulates phylogeny", i.e. the development of an organism successively mirrors the adult stages of successive ancestors of the species to which it belongs. This theory has long been rejected.[9][10] Instead, ontogeny evolves – the phylogenetic history of a species cannot be read directly from its ontogeny, as Haeckel thought would be possible, but characters from ontogeny can be (and have been) used as data for phylogenetic analyses; the more closely related two species are, the more apomorphies their embryos share. 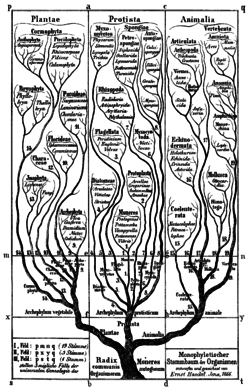