From Infogalactic: the planetary knowledge core
Jump to: navigation, search
This article is about computer memory addressing. For the meaning in networking, see MAC address. 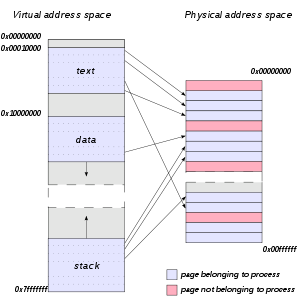 Diagram of relationship between the virtual and physical address spaces.

In computing, a physical address (also real address, or binary address), is a memory address that is represented in the form of a binary number on the address bus circuitry in order to enable the data bus to access a particular storage cell of main memory, or a register of memory mapped I/O device.

Use by central processing unit

In a computer supporting virtual memory, the term physical address is used mostly to differentiate from a virtual address. In particular, in computers utilizing a memory management unit (MMU) to translate memory addresses, the virtual and physical addresses refer to an address before and after translation performed by the MMU, respectively.[1]

Depending upon its underlying computer architecture, the performance of a computer may be hindered by unaligned access to memory. For example, a 16-bit computer with a 16-bit memory data bus, such as Intel 8086, generally has less overhead if the access is aligned to an even address. In that case fetching one 16-bit value requires a single memory read operation, a single transfer over a data bus.[2][3]

Obviously, if the 16-bit data value starts at an odd address, the processor may actually need to perform two memory read cycles to load the value into it, i.e. one for the low address (throwing away half of it) and then a second read cycle to load the high address (throwing away again half of the retrieved data). In fact, on some architectures (such as the Motorola 68000 family), unaligned memory accesses will result in an exception being raised (usually resulting in a software exception being raised like POSIX's SIGBUS).[2]

Use by other devices

The direct memory access (DMA) feature allows other devices in the mother board but CPU to address the main memory. Such devices, therefore, also need to have a knowledge of physical addresses.