Physical characteristics of the Buddha 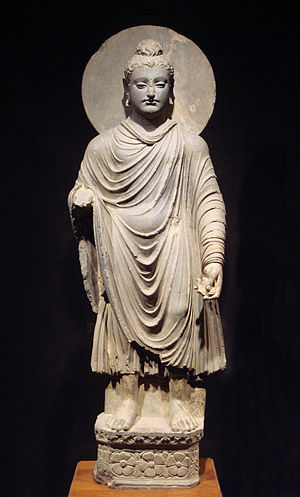 One of the first representations of the Buddha, 1st-2nd century CE, Greco-Buddhist art, Gandhara. 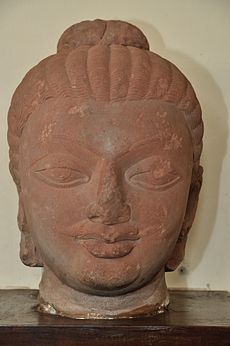 The earliest phase of Buddhism was generally aniconic, with the Buddha being represented as symbols such as a footprint, an empty chair, a riderless horse, or an umbrella.[1] Later, iconic sculptural traditions were established, with two of the most important being in the regions of Gandhara and Mathura.[1]

In the Pali Canon a paragraph appears many times recording the Buddha describing how he began his quest for enlightenment, saying:[4]

So, at a later time, while still young, a black-haired young man endowed with the blessings of youth in the first stage of life—and while my parents, unwilling, were crying with tears streaming down their faces—I shaved off my hair & beard, put on the ochre robe and went forth from the home life into homelessness.

After examining the cult of the Buddha image in India, Gregory Schopen concludes that followers of Mahāyāna at this time played little to no role in introducing statuary and other physical depictions of the Buddha.[5] Mahāyāna sūtras from this period such as the Maitreyasiṃhanāda Sūtra, only address the image cult as an object of criticism, if it is mentioned at all.[5] Schopen states that followers of Mahāyāna were generally uninterested in worshipping buddhas, but rather in becoming buddhas, and their outlook toward Buddhist practice was "profoundly conservative."[5]

The 32 Signs of a Great Man 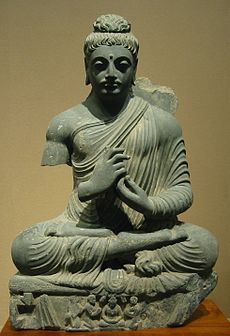 The Digha Nikaya, in the "Discourse of the Marks" (Pali: Lakkhaṇa Sutta) (DN 30) enumerates and explains the 32 characteristics.[2] These are also enumerated in the Brahmāyu Sutta of the Majjhima Nikāya (MN 91).

The 32 major characteristics are:[7] 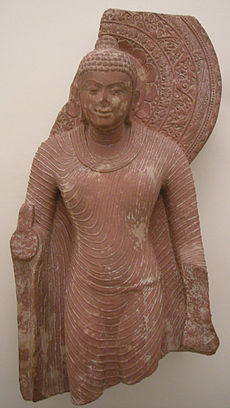 Sculpture of the Buddha from Mathura, India. 5th or 6th century CE

The eighty minor characteristics are:

Some have noted that in at least two discourses in the Pali Canon, the Buddha may be interpreted as being bald as if his head were shaven.[10]