From Infogalactic: the planetary knowledge core
(Redirected from Physiologist)
Jump to: navigation, search

Physiology (/ˌfɪziˈɒlədʒi/; from Ancient Greek φύσις (physis), meaning "nature, origin", and -λογία (-logia), meaning "study of"[1]) is the scientific study of the normal function in living systems.[2] A sub-discipline of biology, its focus is in how organisms, organ systems, organs, cells, and biomolecules carry out the chemical or physical functions that exist in a living system.[3] Given the size of the field, it is divided into, among others, animal physiology (including that of humans), plant physiology, cellular physiology, microbial physiology (see microbial metabolism), bacterial physiology, and viral physiology.[3] Nobel Prize in Physiology or Medicine is awarded to those who make significant achievements in this discipline by the Royal Swedish Academy of Sciences. In medicine, a physiologic state is one occurring from normal body function, rather than pathologically, which is centered on the abnormalities that occur in animal diseases, including humans.[4]

Anatomy and physiology, which study (respectively) the structure and function of organisms, make a natural pair of related disciplines, and they are often studied together.

Physiological studies date back to ancient civilizations of India,[5][6] Egypt alongside anatomical studies but did not utilize dissections and vivisection.[7] The study of human physiology as a medical field dates back to at least 420 BC to the time of Hippocrates, also known as the "father of medicine."[8] Hippocrates incorporated his belief system called the theory of humours, which consisted of four basic substance: earth, water, air and fire. Each substance is known for having a corresponding humour: black bile, phlegm, blood and yellow bile, respectively. Hippocrates also noted some emotional connections to the four humours, which Claudis Galenus would later expand on. The critical thinking of Aristotle and his emphasis on the relationship between structure and function marked the beginning of physiology in Ancient Greece. Like Hippocrates, Aristotle took to the humoral theory of disease, which also consisted of four primary qualities in life: hot, cold, wet and dry.[9] Claudius Galenus (c. ~130–200 AD), known as Galen of Pergamum, was the first to use experiments to probe the functions of the body. Unlike Hippocrates though, Galen argued that humoral imbalances can be located in specific organs, including the entire body.[10] His modification of this theory better equipped doctors to make more precise diagnoses. Galen also played off of Hippocrates idea that emotions were also tied to the humours, and added the notion of temperaments: sanguine corresponds with blood; phlegmatic is tied to phlegm; yellow bile is connected to choleric; and black bile corresponds with melancholy. Galen also saw the human body consisting of three connected systems: the brain and nerves, which are responsible for thoughts and sensations; the heart and arteries, which give life; and the liver and veins, which can be attributed to nutrition and growth.[10] To top it off, Galen was also the founder of experimental physiology.[11] And for the next 1,400 years, Galenic physiology was a powerful and influential tool in medicine.[10] 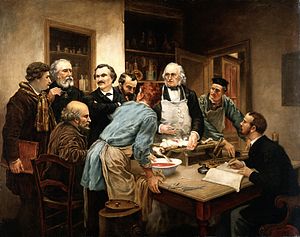 Oil painting depicting Claude Bernard, the father of modern physiology, with his pupils

In the 19th century, physiological knowledge began to accumulate at a rapid rate, in particular with the 1838 appearance of the Cell theory of Matthias Schleiden and Theodor Schwann. It radically stated that organisms are made up of units called cells. Claude Bernard's (1813–1878) further discoveries ultimately led to his concept of milieu interieur (internal environment), which would later be taken up and championed as "homeostasis" by American physiologist Walter B. Cannon in 1929. By homeostasis, Cannon meant "the maintenance of steady states in the body and the physiological processes through which they are regulated."[13] In other words, the body's ability to regulate its internal environment. It should be noted that, William Beaumont was the first American to utilize the practical application of physiology.

Initially, women were largely excluded from official involvement in any physiological society. The American Physiological Society, for example, was founded in 1887 and included only men in its ranks.[citation needed] In 1902, the American Physiological Society elected Ida Hyde as the first female member of the society.[citation needed] Hyde, a representative of the American Association of University Women and a global advocate for gender equality in education,[14] attempted to promote gender equality in every aspect of science and medicine.

1858- Joseph Lister studied the cause of blood coagulation and inflammation that resulted after previous injuries and surgical wounds. He later discovered and implemented antiseptics in the operating room, and as a result decreases death rate from surgery by a substantial amount.[4][22]

1891- Ivan Pavlov performed research on "conditional reflexes" that involved dogs' saliva production in response to a plethora of sounds and visual stimuli.[22]

In the 20th century, biologists also became interested in how organisms other than human beings function, eventually spawning the fields of comparative physiology and ecophysiology.[23] Major figures in these fields include Knut Schmidt-Nielsen and George Bartholomew. Most recently, evolutionary physiology has become a distinct subdiscipline.[24]

Today, and times before, physiologists continuously trying to find answers to important questions concerning how populations interact, the environment on earth, and in single cell functions.[4]

There are many ways to categorize the subdiscplines of physiology:[25] 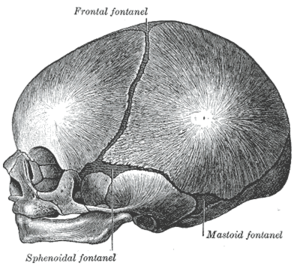 The human skull at birth, with its fontanelles, presents many important anatomical and physiological features.

Human physiology seeks to understand the mechanisms that work to keep the human body alive and functioning,[3] through scientific enquiry into the nature of mechanical, physical, and biochemical functions of humans, their organs, and the cells of which they are composed. The principal level of focus of physiology is at the level of organs and systems within systems. The endocrine and nervous systems play major roles in the reception and transmission of signals that integrate function in animals. Homeostasis is a major aspect with regard to such interactions within plants as well as animals. The biological basis of the study of physiology, integration refers to the overlap of many functions of the systems of the human body, as well as its accompanied form. It is achieved through communication that occurs in a variety of ways, both electrical and chemical.[citation needed]

Much of the foundation of knowledge in human physiology was provided by animal experimentation. Physiology is the study of function and is closely related to anatomy which is the study of form and structure. Due to the frequent connection between form and function, physiology and anatomy are intrinsically linked and are studied in tandem as part of a medical curriculum.[citation needed]