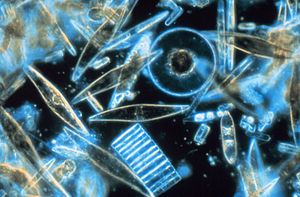 Diatoms are one of the most common types of phytoplankton.

Phytoplankton /ˌfaɪtoʊˈplæŋktən/ are the autotrophic components of the plankton community and a key factor of oceans, seas and freshwater basin ecosystems. The name comes from the Greek words φυτόν (phyton), meaning "plant", and πλαγκτός (planktos), meaning "wanderer" or "drifter".[1] Most phytoplankton are too small to be individually seen with the unaided eye. However, when present in high enough numbers, some varieties may be noticeable as colored patches on the water surface due to the presence of chlorophyll within their cells and accessory pigments (such as phycobiliproteins or xanthophylls) in some species. 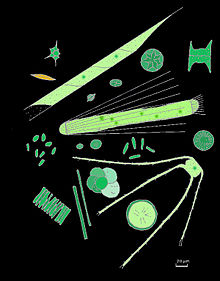 Phytoplankton come in many shapes and sizes. 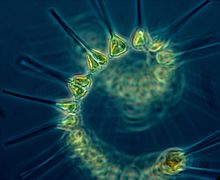 Phytoplankton are the foundation of the oceanic food chain. 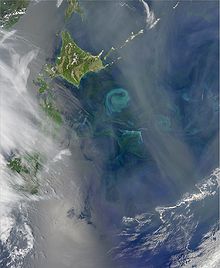 When two currents collide (here the Oyashio and Kuroshio currents) they create eddies. Phytoplankton concentrates along the boundaries of the eddies, tracing the motion of the water. 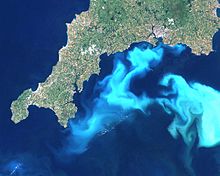 Phytoplankton are photosynthesizing microscopic organisms that inhabit the upper sunlit layer of almost all oceans and bodies of fresh water. They are agents for "primary production," the creation of organic compounds from carbon dioxide dissolved in the water, a process that sustains the aquatic food web.[2] Phytoplankton obtain energy through the process of photosynthesis and must therefore live in the well-lit surface layer (termed the euphotic zone) of an ocean, sea, lake, or other body of water. Phytoplankton account for half of all photosynthetic activity on Earth.[3][4] Their cumulative energy fixation in carbon compounds (primary production) is the basis for the vast majority of oceanic and also many freshwater food webs (chemosynthesis is a notable exception). The effects of anthropogenic warming on the global population of phytoplankton is an area of active research. Changes in the vertical stratification of the water column, the rate of temperature-dependent biological reactions, and the atmospheric supply of nutrients are expected to have important effects on future phytoplankton productivity.[5][6] Additionally, changes in the mortality of phytoplankton due to rates of zooplankton grazing may be significant. As a side note, one of the more remarkable food chains in the ocean – remarkable because of the small number of links – is that of phytoplankton-feeding krill (a crustacean similar to a tiny shrimp) feeding baleen whales.

Phytoplankton are also crucially dependent on minerals. These are primarily macronutrients such as nitrate, phosphate or silicic acid, whose availability is governed by the balance between the so-called biological pump and upwelling of deep, nutrient-rich waters. However, across large regions of the World Ocean such as the Southern Ocean, phytoplankton are also limited by the lack of the micronutrient iron. This has led to some scientists advocating iron fertilization as a means to counteract the accumulation of human-produced carbon dioxide (CO2) in the atmosphere.[7] Large-scale experiments have added iron (usually as salts such as iron sulphate) to the oceans to promote phytoplankton growth and draw atmospheric CO2 into the ocean. However, controversy about manipulating the ecosystem and the efficiency of iron fertilization has slowed such experiments.[8]

Phytoplankton depend on other substances to survive as well. In particular, Vitamin B is crucial. Areas in the ocean have been identified as having a major lack of Vitamin B, and correspondingly, phytoplankton.[9]

While almost all phytoplankton species are obligate photoautotrophs, there are some that are mixotrophic and other, non-pigmented species that are actually heterotrophic (the latter are often viewed as zooplankton). Of these, the best known are dinoflagellate genera such as Noctiluca and Dinophysis, that obtain organic carbon by ingesting other organisms or detrital material.

The term phytoplankton encompasses all photoautotrophic microorganisms in aquatic food webs. Phytoplankton serve as the base of the aquatic food web, providing an essential ecological function for all aquatic life. However, unlike terrestrial communities, where most autotrophs are plants, phytoplankton are a diverse group, incorporating protistan eukaryotes and both eubacterial and archaebacterial prokaryotes. There are about 5,000 known species of marine phytoplankton.[10] There is uncertainty in how such diversity has evolved in an environment where competition for only a few resources would suggest limited potential for niche differentiation.[11]

In terms of numbers, the most important groups of phytoplankton include the diatoms, cyanobacteria and dinoflagellates, although many other groups of algae are represented. One group, the coccolithophorids, is responsible (in part) for the release of significant amounts of dimethyl sulfide (DMS) into the atmosphere. DMS is oxidized to form sulfate which, in areas where ambient aerosol particle concentrations are low, can contribute to the population of cloud condensation nuclei, mostly leading to increased cloud cover and cloud albedo according to the so-called CLAW Hypothesis.[12] [13] In oligotrophic oceanic regions such as the Sargasso Sea or the South Pacific Gyre, phytoplankton is dominated by the small sized cells, called picoplankton, mostly composed of cyanobacteria (Prochlorococcus, Synechococcus) and picoeucaryotes such as Micromonas.

In the early twentieth century, Alfred C. Redfield found the similarity of the phytoplankton’s elemental composition to the major dissolved nutrients in the deep ocean.[14] Redfield proposed that the ratio of nitrogen to phosphorus (16:1) in the ocean was controlled by the phytoplankton’s requirements which subsequently release nitrogen and phosphorus as they are remineralized. This so-called “Redfield ratio” in describing stoichiometry of phytoplankton and seawater has become a fundamental principle to understand the marine ecology, biogeochemistry and phytoplankton evolution.[15] However, Redfield ratio is not a universal value and it may diverge due to the changes in exogenous nutrient delivery [16] and microbial metabolisms in the ocean, such as nitrogen fixation, denitrification and anammox.

The dynamic stoichiometry shown in unicellular algae reflects their capability to stockpile nutrients in internal pool, shift between enzymes with various nutrient requirements and alter osmolyte composition.[17][18] Different cellular components have their own unique stoichiometry characteristics,[15] for instance, resource (light or nutrients) acquisition machinery such as proteins and chlorophyll contain high concentration of nitrogen but low in phosphorus. Meanwhile, growth machinery such as ribosomal RNA contains high nitrogen and phosphorus concentration.

A 2010 study published in Nature reported that marine phytoplankton have declined substantially in the world's oceans over the past century. Phytoplankton concentrations in surface waters were estimated to have decreased by about 40% since 1950 alone, at a rate of around 1% per year, possibly in response to ocean warming.[20][21] The study generated debate among scientists and led to several communications and criticisms, also published in Nature.[22][23][24][25] In a follow-up study published in 2014, the authors used a larger database of measurements and revised their analysis methods to account for several of the published criticisms, but ultimately reached similar conclusions to the original Nature study.[26] These studies and the need to understand the phytoplankon in the ocean led to the creation of the Secchi Disk Citizen Science study in 2013.[27] The Secchi Disk study is a global study of the phytoplankton conducted by seafarers (sailors, anglers, divers) involving a Secchi Disk and a free mobile phone app called Secchi.

Estimates of phytoplankton change in the oceans have been highly variable. One global ocean primary productivity study found a net increase in phytoplankton, as judged from measured chlorophyll, when comparing observations in 1998–2002 to those conducted during a prior mission in 1979–1986.[28] However, using the same database of measurements, other studies have found that both chlorophyll and primary production had declined over this same time interval.[29][30] The airborne fraction of CO2 from human emissions, the percentage neither sequestered by photosynthetic life on land and sea nor absorbed in the oceans abiotically, has been almost constant over the past century, and that suggests a moderate upper limit on how much a component of the carbon cycle as large as phytoplankton may have declined, if such declined in recent decades.[31] In the example of the northeast Atlantic, a case where chlorophyll measurements extend particularly far back, the location of the Continuous Plankton Recorder (CPR) survey, there was net increase over a 1948 to 2002 period examined.[32] During 1998–2005, global ocean net primary productivity rose during 1998 followed by primarily decline during the rest of that period, although still slightly higher at its end than at its start.[33] Using six different climate model simulations, a large multi-university study of ocean ecosystems predicts, by 2050 A.D., "a global increase in primary production of 0.7% at the low end to 8.1% at the high end," although with "very large regional differences" including "a contraction of the highly productive marginal sea ice biome by 42% in the Northern Hemisphere and 17% in the Southern Hemisphere."[34] However, a more recent multi-model study estimated that primary production will decline by 2-20% by 2100 A.D.[35] Despite substantial variation in both the magnitude and spatial pattern of change, the majority of published studies predict that phytoplankton biomass and/or primary production will decline over the next century.[36][37][38][39][40][41][42][43][44]

The production of phytoplankton under artificial conditions is itself a form of aquaculture. Phytoplankton is cultured for a variety of purposes, including foodstock for other aquacultured organisms,[45] a nutritional supplement for captive invertebrates in aquaria. Culture sizes range from small-scale laboratory cultures of less than 1L to several tens of thousands of liters for commercial aquaculture.[45] Regardless of the size of the culture, certain conditions must be provided for efficient growth of plankton. The majority of cultured plankton is marine, and seawater of a specific gravity of 1.010 to 1.026 may be used as a culture medium. This water must be sterilized, usually by either high temperatures in an autoclave or by exposure to ultraviolet radiation, to prevent biological contamination of the culture. Various fertilizers are added to the culture medium to facilitate the growth of plankton. A culture must be aerated or agitated in some way to keep plankton suspended, as well as to provide dissolved carbon dioxide for photosynthesis. In addition to constant aeration, most cultures are manually mixed or stirred on a regular basis. Light must be provided for the growth of phytoplankton. The colour temperature of illumination should be approximately 6,500 K, but values from 4,000 K to upwards of 20,000 K have been used successfully. The duration of light exposure should be approximately 16 hours daily; this is the most efficient artificial day length.[45]