Esox is a genus of freshwater fish, the only living genus in the family Esocidae—the esocids which were endemic to North America and Eurasia during the Paleogene through present.[2]

The species of this genus are known as pike and pickerel.[3][4] The type species is E. lucius, the northern pike.

The big pike species are native to the Palearctic and Nearctic ecozones, ranging across northern North America and from Western Europe to Siberia in Eurasia.

Pikes have the elongated, torpedo-like form of predatory fishes, with sharply pointed heads and sharp teeth. Their coloration is typically grey-green with a mottled or spotted appearance with stripes along their backs, providing camouflage among weeds. Individual pike marking patterns are unique, like fingerprints. Pike can grow to a maximum recorded length of 1.83 m (6 ft), reaching a maximum recorded weight of 35 kg (77 lb).[citation needed]

There currently seven recognized species in this genus:

One fossil species, Esox kronneri Grande, 1999, is known from the Eocene of the Green River formation.[7]

The generic name Esox (pike fish) derives from the Greek ἴσοξ (ee-soks, a large fish) and appears to be both profoundly archaic and cognate with Celtic, Welsh eog and Irish Gaelic iasc (fish), as well as alpine Gaulic *esosk which is consistent with the original indoeuropean root for the common word for fish, *pei(k)sk. Pliny uses the Latin form Esox in reference to a large fish in the Rhine normally identified with salmonidae (lax or salmon). Carolus Linnaius attributes Esox to the pike fish which is of similar form and appearance but taxonomically different to the salmoniformes, whereas the first mention of Esox as a marine animal appears in the writings of Hesych(ius) . 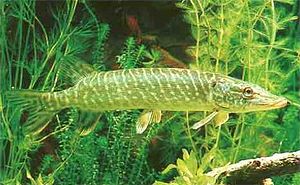 A young E. lucius specimen—a "Chain pickerel" in the original sense—in an aquarium.

The English common name "pike" is an apparent shortening of "pike-fish", in reference to its pointed head, Old English píc originally referring to a pickaxe. The plural of pike is pike.

The English "pike" originally referred specifically to the adult fish, the diminutive form "pickerel" (now used to name some of the smaller pike, E. americanus and E. niger) referring to the young. The walleye (Sander vitreus) is sometimes called a pickerel by Gerard, but it is unrelated to the pike, being a member of the perch family (Percidae). Pike are not to be confused with the unrelated pikeminnows (traditionally known as squawfish) of genus Ptychocheilus (family Cyprinidae) or pikeperch (Sander lucioperca) which is more akin to walleye than to pike. Pike are also called "jackfish" in North America and informally "slough shark" in Western Canada. 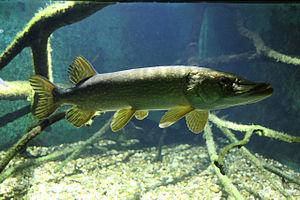 Pike feed on a wide range of food sources, predominantly smaller shoal fish. Pike are also cannibalistic, sometimes preying upon smaller members of their own species. This can be seen clearly in the northern pike.

They will also prey on insects and amphibians such as newts or frogs in times when their usual food is scarce, and occasionally on small mammals like moles or mice when caught water-borne. Small birds such as ducklings may become a target for hungry pike. Pike are also known to prey on swimming snakes.

They are, however, undeserving of their reputation for being overly vicious predators. There are few substantiated incidents of pike "attacks" on people. Pike's further reputation as a pest seems to lie predominantly amongst a small handful of anglers and fishery managers who think, perhaps unfairly, that pike are a threat to native rough fish and also other sport fish. 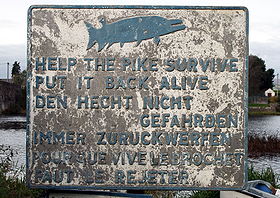 Effective methods for catching this hard-fighting fish include dead baits, live baits, and lure fishing. Pike can easily be damaged when handled since they are not as robust as their reputation would suggest. Colour of lure can be influenced by water clarity and weather conditions. Since pike have numerous sharp teeth it is wise to take extreme care when unhooking them. The use of a wet leather gauntlet and surgical forceps to remove hooks is highly recommended on safety grounds. If practicing catch and release fishing, care for the pike should be the pike angler's utmost concern. The formerly recommended practice of grasping a pike by its eye sockets (tragically interpreted as "its eyes") resulted in countless released pike that quickly died from inability to see prey any longer.

The current recommended method of grasping pike is to close the hand firmly over the gill covers, and to make the period of handling as short as possible before release. Grabbing a pike by the gill covers is not feasible when a pike is very big, but it is easy to handle a pike by inserting the fingers at the bottom of the gill opening and grabbing the lower jaw. Big pike should also be supported at the belly. When a pike is held this way it is also easier to keep the mouth open to remove a hook. Some anglers now use special grips to grab the pike's front lower jaw, which can add to the safety of an anglers because of the danger imposed by the hooks of the lure or tackle and the pike's teeth. However these can cause serious damage to a pike's lower jaw. The Pike Anglers Club was formed in 1977 to campaign for the preservation of pike and the sport of pike fishing.

A practice known as gut hooking was previously widely used in catching pike. Upon taking the bait, the pike will hold it for a short time in its mouth as it moves off. The pike will then, usually, turn the bait in its mouth, so that it sits in alignment with its throat to ease swallowing. It is recommended that when pike fishing the process is not allowed to go this far and a strike is recommended as soon as a bite is indicated. Otherwise, what is known as gut hooking will result, which will normally kill or seriously injure the fish. Dutch research shows that cutting the line immediately when the fish is gut hooked will still give low mortality (14%). The hooks in the gut or stomach were either encapsulated or removed from the body.[8] Placing hooks near the rear of the bait reduces the risk of deep hooking.[9]

Other methods of catching and handing pike that are now frowned upon are the gaff and the gag. The gaff is a metal hook on the end of a pole used to hook through the fish's body in place of a more humane landing net. A gag is a device for holding open the pike's mouth whilst unhooking. These are now illegal in Scotland, as they put a huge amount of pressure on a pike's jaw, thus causing irreparable damage.

Russian mythology holds that the pike is one of several forms assumed by evil water spirits called vodyanoy, and a ravenous mythical pike is traditionally blamed for decimating the fish population in the Sheksna River. Russian fairy tales, on the other hand, also tell about an old wise pike that can fulfil wishes of the one who catches it, if its catcher releases it back into its habitat.[citation needed]

In the Finnish Kalevala, Väinämöinen creates a kantele (string instrument) from the jawbone of the pike.

In heraldry, the pike is called a lucy (English heraldry) or a ged (Scottish heraldry).[3] It is usually blazoned either naiant (swimming), embowed (bowed) or hauriant (jumping), though pairs of lucies may appear addorsed (back to back), as in the arms of the Finnish town of Uusikaupunki, Finland. (Argent, two lucies addorsed azure).[citation needed]