Ping-pong diplomacy (Chinese: 乒乓外交 Pīngpāng wàijiāo) refers to the exchange of table tennis (ping-pong) players between the United States and People's Republic of China (PRC) in the early 1970s. The event marked a thaw in Sino-American relations that paved the way to a visit to Beijing by President Richard Nixon.

The U.S. Table Tennis team was in Nagoya, Japan in 1971 for the 31st World Table Tennis Championships on April 6 when they received an invitation to visit China. From the early years of the People's Republic, sports had played an important role in diplomacy, often incorporating the slogan "Friendship First, Competition Second". During the isolationist years, athletes were among the few PRC nationals who were allowed to travel overseas. On April 10, 1971, the team and accompanying journalists became the first American delegation to set foot in the Chinese capital since 1949.[1] The meeting was facilitated by the National Committee on United States – China Relations. Prior to the visit by the American table tennis players, eleven Americans were admitted into the PRC for one week because they all professed affiliation with the Black Panther Party which followed a Maoist political line. This was unusual, given that high-profile American citizens such as Senator Eugene McCarthy expressed interest in visiting China after the 1968 presidential election, but even he could not have a trip arranged for him despite his office.

According to History of U.S. Table Tennis by American table tennis players and Tim Boggan, who went to China along with the U.S. Table Tennis Team, three incidents may have triggered the invitation from China. Welshman H. Roy Evans, then President of the International Table Tennis Federation, claimed that he visited China prior to the 31st World Table Tennis Championship and suggested non-Chinese sports authorities and Premier Zhou Enlai that China should take steps to get in contact with the world through international sport events after the Cultural Revolution. Further, the American player Leah "Miss Ping" Neuberger, the 1956 World Mixed Doubles Champion and nine-time U.S. Open Women's Singles Champion, was traveling at the time with the Canadian Table Tennis Team that had been invited by China to visit the country. China diplomatically extended its approval of Leah Neuberger's application for a visa to the entire American team. The third incident, perhaps the most likely trigger, was the unexpected but dramatic meeting between the flamboyant American player Glenn Cowan and the Chinese player Zhuang Zedong, a three-time world champion and winner of many other table tennis events. Zhuang Zedong described the incident[2] in a 2007 talk at the USC U.S.-China Institute.

The events leading up to the encounter began when Glenn Cowan missed his team bus one afternoon after his practice in Nagoya during the 31st World Table Tennis Championship. Cowan had been practicing for 15 minutes with the Chinese player, Liang Geliang, when a Japanese official came and wanted to close the training area. As Cowan looked in vain for his team bus, a Chinese player[who?] waved to him to get on his Chinese team bus. Moments after his casual talking through an interpreter to the Chinese players[citation needed], Zhuang Zedong came up from his back seat to greet him and presented him with a silk-screen portrait of Huangshan Mountains, a famous product from Hangzhou. Cowan wanted to give something back, but all he could find from his bag was a comb. The American hesitantly replied, "I can't give you a comb. I wish I could give you something, but I can't." This World Table Tennis Championships marked the return of China's participation after a six-year absence. When the Chinese team and Cowan walked off the bus, journalists who were following the Chinese team took photographs.[3] In the political climate of the 1960s, the sight of an athlete of Communist China with an athlete of the United States was sure to garner attention. Glenn Cowan later bought a T-shirt with a red, white and blue, peace emblem flag and the words "Let It Be," which he presented to Zhuang Zedong at another chance meeting.

During an interview in 2002 with the famous TV personality Chen Luyu, Zhuang Zedong told more of the story: "The trip on the bus took 15 minutes, and I hesitated for 10 minutes. I grew up with the slogan 'Down with the American imperialism!' And during the Cultural Revolution, the string of class struggle was tightened unprecedentedly, and I was asking myself, 'Is it okay to have anything to do with your No. 1 enemy?'" Zhuang recalled remembering that Chairman Mao Zedong met Edgar Snow on the Rostrum of Tiananmen on the National Day in 1970 and said to Snow that China should now place its hope on American people. Zhuang looked in his bag and first went through some pins, badges with Mao's head, silk handkerchiefs, and fans. But he felt these were not decent enough to be a good gift. He finally picked the said silk portrait of Huangshan Mountains. On the following day, many Japanese newspapers carried photographs of Zhuang Zedong and Glenn Cowan.

When the Chinese Department of Foreign Affairs received a report that the U.S. Table Tennis Team hoped to get invited to visit China, the Department declined as usual. Zhou Enlai and Mao Zedong initially agreed with the decision, but when Mao Zedong saw the news in Dacankao, a newspaper accessible only to high-ranking government officials, he decided to invite the U.S. Table Tennis Team. It was reported that Mao Zedong said, "This Zhuang Zedong not only plays table tennis well, but is good at foreign affairs, and he has a mind for politics.[4]" On April 10, 1971, nine American players, four officials, and two spouses stepped across a bridge from Hong Kong to the Chinese mainland and then spent their time during April 11–17 playing fun matches, touring the Great Wall and Summer Palace, and watching a ballet.

During the week of June 9, 2008, a three-day ping-pong diplomacy event was held at the Richard Nixon Presidential Library and Museum in Yorba Linda, California. Original members of both the Chinese and American ping-pong teams from 1971 were present and competed again.

Ping-pong diplomacy was referenced in the 1994 film Forrest Gump. After suffering injuries in battle, Forrest develops an aptitude for the sport and joins the U.S. Army team — eventually competing against Chinese teams on a goodwill tour.

Upon his return to the United States, one of the American players told reporters that the Chinese were very similar to people in the U.S. He said:

"The people are just like us. They are real, they're genuine, they got feeling. I made friends, I made genuine friends, you see. The country is similar to America, but still very different. It's beautiful. They got the Great Wall, they got plains over there. They got an ancient palace, the parks, there's streams, and they got ghosts that haunt; there's all kinds of, you know, animals. The country changes from the south to the north. The people, they have a, a unity. They really believe in their Maoism."[5] 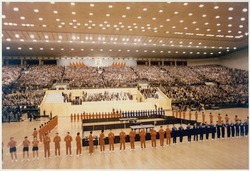 Two months after Richard Nixon's visit, Zhuang Zedong visited the U.S. as the head of a Chinese table-tennis delegation, April 12–30, 1972. Also on the itinerary were Canada, Mexico and Peru. However, China's attempts to reach out to countries through "ping-pong diplomacy" were not always successful, such as when the All Indonesia Table Tennis Association (PTMSI) refused China's invitation in October 1971, claiming that accepting the PRC's offer would improve the PRC's reputation. Because neither Soviet athletes nor journalists appeared in China following the appearance of the American players and journalists, one speculation is that the act showed the equal scorn of both countries towards the USSR.