From Infogalactic: the planetary knowledge core
Jump to: navigation, search
For other uses, see Piombino (disambiguation). 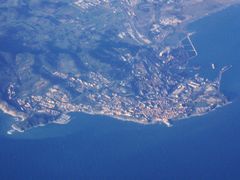 The Rivellino, the ancient main gate built in 1447 by Rinaldo Orsini.

Piombino is an Italian town and comune of about 35,000 inhabitants in the province of Livorno (Tuscany). It lies on the border between the Ligurian Sea and the Tyrrhenian Sea, in front of Elba Island and at the northern side of Maremma.

It has an ancient historical center, derived from the time in which it was the Etruscans' port, in the surroundings of Populonia. In the Middle Ages, it was instead an important port of the Republic of Pisa.

Its hinterland hosts a considerable industrial area. Its port is still heavily used, both for industry and for tourism, with ferry-boats to Portoferraio (Elba) and Olbia (Sardinia).

The area of modern Piombino was settled since ancient times. During the Etruscan era the main city in the area was Populonia, now a frazione within the comune of Piombino.

The name Piombino derives almost certainly from Populino, meaning "Small Populonia", which the refugees gave to a small village where they had taken refuge after the city had been attacked by Greek pirates (9th century). It is also probable that Piombino had already been founded during the Ostrogoth domination.

In 1022 the Monastery of San Giustiniano was founded in the area, boosting the activity of fishermen, sailors and workers. In 1115 Piombino submitted to the Republic of Pisa, becoming its second main port: authority was exerted by a Capitano ("Captain"). During the conflicts between the Pisane and the Genoese (12th-13th centuries) the city was sacked various times. In 1248 the Capitano Ugolino Arsopachi built the Channels.

The Castle of Piombino remained a Pisane possession until Gerardo Appiani, ceding Pisa to the Milanese Visconti, carved out the independent state of Piombino, Elba, Pianosa and Montecristo for his family, who held it until 1634. In 1445, through his marriage with Caterina Appiani, Rinaldo Orsini acquired the lordship. In 1501-1503 the principality was under Cesare Borgia. In 1509 the Appiani became princes of the Holy Roman Empire with the title of Piombino. 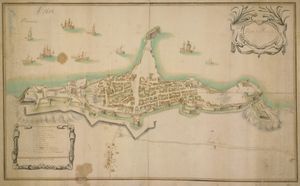 Map of Piombino and its fortifications, 18th century.

After Cosimo I de' Medici had occupied it in the course of the war against Siena, in 1553 and 1555 a French-Ottoman fleet attacked Piombino, but was pushed back. In 1557 the peace treaty reinstated the Appiani, with the exception of Portoferraio, given to the Grand Duchy of Tuscany, and the area of Orbetello, which became the State of Presidi under Spanish control. In 1594 the Principality of Piombino was created by Emperor Rudolf II of Habsburg, the first prince being Alessandro Appiani d'Aragona. In 1634 the title was acquired by the Ludovisi, whose member Niccolò I had married Polissena Appiani in 1632. In 1708 it went to the Boncompagni with Antonio I. In 1801 Napoleon abolished the principate, Piombino and its lands being annexed by the Kingdom of Etruria; in 1809 they were given to Napoleon's sister, Elisa Baciocchi.

After the Napoleon's final defeat and the congress of Vienna, the state of Piombino was annexed by the Grand Duchy of Tuscany. It became part of the unified Kingdom of Italy in 1860.

The battle of Piombino

During World War II, in the days that followed the announcement of the Armistice of Cassibile, Piombino was the setting for one of the first episodes of the Italian resistance.[2] On 10 September 1943, during Operation Achse, a small German flotilla, commanded by Kapitänleutnant Karl-Wolf Albrand, tried to enter the harbour of Piombino but was denied access by the port authorities.[2] General Cesare Maria De Vecchi, in command of the Italian coastal forces (and a former Fascist Gerarca), commanded the port authorities to allow the German flotilla to enter, against the advice of Commander Amedeo Capuano, the Naval commander of the harbour.[2][3][4] Once they entered and landed, the German forces showed a hostile behaviour, and it became clear that their intent was to occupy the town; the local population asked for a resolved reaction by the Italian forces, threatening an insurrection, but the senior Italian commander, general Fortunato Perni, instead ordered his tanks to open fire on the civilians, to disperse the crowds; De Vecchi forbade any action against the Germans.[2][3][4] This however did not stop the protests; some junior officers, acting on their own initiative and against the orders (Perni and De Vecchi even tried to dismiss them for this), assumed command and started distributing weapons to the population, and civilian volunteers joined the Italian sailors and soldiers in the defense.[2][3][5] Battle broke out at 21:15 on 10 September, between the German landing forces (who aimed to occupy the town centre) and the Italian coastal batteries, tanks, and civilian population.[3][2][4] Italian tanks sank the German torpedo boat TA 11;[6][7] Italian artillery also sank seven Marinefährprahme, the péniches Mainz and Meise (another péniche, Karin, was scuttled at the harbour entrance as a blockship) and six Luftwaffe service boats (Fl.B.429, Fl.B.538, Fl.C.3046, Fl.C.3099, Fl.C.504 e Fl.C.528), and heavily damaged the torpedo boat TA 9 and the steamers Carbet and Capitano Sauro (formerly Italian).[8] Sauro and Carbet were scuttled because of the damage they had suffered.[8][9] The German attack was repelled; by the dawn of 11 September, 120 Germans had been killed and about 200-300 captured, 120 of them wounded.[4] Italian casualties had been 4 killed (two sailors, one Guardia di Finanza brigadier, and one civilian) and a dozen wounded;[10][11] four Italian submarine chasers (VAS 208, 214, 219 and 220) were also sunk during the fightning.[8] Later in the morning, however, De Vecchi ordered the prisoners to be released, and had their weapons given back to them.[3][2][12] New popular protests broke out, as the Italian units were disbanded and the senior commanders fled from the city; the divisional command surrendered Piombino to the Germans on 12 September, and the city was occupied.[3][4][2] Many of the sailors, soldiers and citizens who had fought in the battle of Piombino retreated to the surrounding woods and formed the first partisan formations in the area.[3] For the deeds of its citizens, the town received a Gold Medal for Military Valour from President Carlo Azeglio Ciampi. 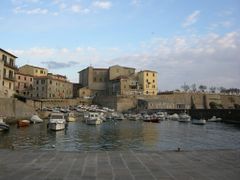 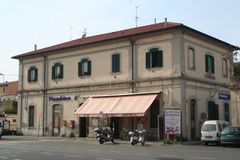 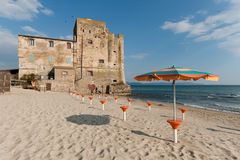 Torre Mozza, 16th century Tuscan coastal tower. It is now a historical and tourist attraction in the Follonica gulf, in front of Elba island

Piombino has schools, gymnasia (middle school), lyceums (high school), churches, banks, parks and squares. In the locality of Punta Falcone is an astronomical observatory, created in 1976. East of Piombino, there is a power station with 1280 MW generation capacity with two chimneys, each 195 metres (640 ft) tall. West of Piombino, there is the start of the submarine power cable section to Corsica from HVDC SACOI.