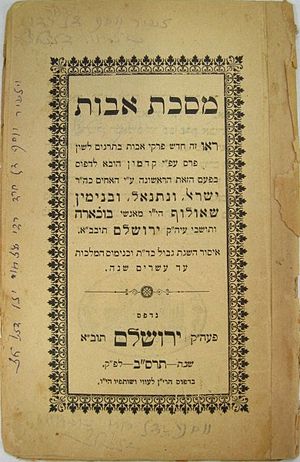 Translation of the title

The recognition of ethical maxims as 'Fundamental Principles' may derive from the high regard in which the Torah, Mishnah, and Talmud hold such wisdom. "Love your neighbor as yourself," states the Bible (Leviticus 19:18), an injunction that Akiva ben Joseph in Genesis Rabbah 24:7 famously calls a "great principle" of the Torah. In Shabbos 31a, Hillel says "That which is hateful to you, do not do to your fellow: This is the entire Torah, the rest is the explanation, go now and learn it." The attribution of Biblical Wisdom books to King Solomon (e.g., Ecclesiastes, Proverbs, Book of Wisdom) attests also to the central importance that Jews of this period placed on transmitting the ethical way of life.

Because of the more common usage of avot as meaning "fathers", Pirkei Avot is often rendered in English as "Chapters of the Fathers", or even more loosely, "Ethics of the Fathers". While this translation engenders an appealing and not entirely mistaken image of "patriarchal teachings", this is probably not the primary intention of the work's title. The term 'avot' is not usually used as an honorary designation for 'rabbis' or 'sages'; in rabbinical usage, it refers to the Patriarchs of the Bible. However, the possibility that the wording of the title was designed to support multiple renderings cannot be ruled out.

Structure of the work

The Mishnaic tractate Avot consists of five chapters. It begins with an order of transmission of the Oral Tradition; Moses receives the Torah at Mount Sinai and then transmits it through various generations (including Joshua, the Elders, and the Neviim, but notably not the Kohanim), whence it finally arrives at the Great Assembly, i.e., the Rabbis (Avot 1:1). It contains sayings attributed to sages from Simon the Just (200 BCE) to shortly after Judah haNasi (200 CE), redactor of the Mishnah. These aphorisms concern proper ethical and social conduct, as well as the importance of Torah study.

The first two chapters proceed in a general chronological order, with the second focusing on the students of Yochanan Ben Zakkai. Chapters Three and Four are thematic and contain various attributed sayings in no explicit order. Chapter Five departs from the organization and content of the preceding four in that it consists mostly of anonymous sayings structured around numerical lists, several of which have no direct connection with ethics. The last four paragraphs of this chapter return to the format of moral aphorisms attributed to specific rabbis.

In liturgical use, and in most printed editions of Avot, a sixth chapter, Kinyan Torah ("Acquisition of Torah") is added; this is in fact the eighth (in the Vilna edition) chapter of tractate Kallah, one of the minor tractates. It is added because its content and style are somewhat similar to that of the original tractate Avot (although it focuses on Torah study more than ethics), and to allow for one chapter to be recited on each Shabbat of the Omer period, this chapter being seen well-suited to Shabbat Shavuot, when the giving of the Torah is celebrated. (See below.) The term Pirkei Avot refers to the composite six-chapter work (Avot plus Kinyan Torah).

"The structure of the tractate differs greatly from the thematic structure of the other tractates and Avot sayings employ a highly stylized language instead of the clear and straightforward mishnaic prose. In addition, the anomalous character of Avot is heightened by the biblical influences on its linguistic expressions, grammatical forms, and vocabulary."[3]

Unlike the majority of Mishnaic tractates, Avot has no Gemara. However, there is an expanded version known as Avot de-Rabbi Natan.

Study of the work

From at least the time of Saadia Gaon (10th century), it has been customary to study one chapter a week on each Shabbat between Passover and Shavuot; today, the tractate is generally studied on each Shabbat of the summer, from Passover to Rosh Hashanah, the entire cycle repeating a few times with doubling of chapters at the end if there are not a perfect multiple of six weeks.[4] The tractate is therefore included in many prayer books, following Shabbat afternoon prayers.

In the course of such study, it is common to preface each chapter with the Mishnaic saying, "All Israel has a share in the world to come" (Sanhedrin 10:1), and to conclude each chapter with the saying, "The Holy One, blessed be He, wished to bestow merit upon Israel; therefore he gave them Torah and mitzvot in abundance" (Makkoth 3:16).

The tractate includes several of the most frequently-quoted rabbinic sayings, such as "If I am not for myself, who will be for me? And when I am for myself, what am 'I'? And if not now, when?" (Avot 1:14). It is written in simple and terse Hebrew and is attributed to the great sage Hillel, who was famous for succinct expression.

Mishnaic tractates, originally orally transmitted in Mishnaic Hebrew, are usually accompanied by commentaries in Aramaic — the Gemara (literally, the Aramaic word for "the teaching"). Avot does not have a Gemara because the concepts in it can never be dealt with completely, being the "fifth part of the Shulchan Aruch" (being intrinsically "derekh eretz": wise practices).Template:Rav Shlomo Zalman Aurbach

Although Avot does not have an accompanying Gemara, one of the minor tractates of the Talmud, Avot deRabbi Nathan ("The Fathers according to Rabbi Nathan"), is an expansion of the Mishnaic tractate containing numerous additional ethical teachings and legends.

The number of medieval and modern commentaries on the Tractate of Avot is large, and probably not known accurately. Among the best-known commentaries are the following:

In the early 20th century, parts of it were translated into Yiddish by Yehoash.

The number of commentaries written on Pirkei Avot testify that it contains far more content and structure than can be captured in a simple outline. The following list aims merely to group some of the general principles found in the work.

Show kindness to others

Respect the other person

Be circumspect in prayer

Do not exploit your learning

Be careful with speech

Do not seek rewards

Do not leap to judge another person

Be fair and deliberate in legal decision

Be fair and deliberate in business

The time for action is now

Seek an even temperament

The punishment matches the sin

A Chinese translation of Pirkei Avot, by Chinese scholars, was published in 1996. The first edition, of 1500 copies, sold out immediately.[5] Another Chinese translation was made in Jewish year 5761 with the title "猶太聖傳·民刑卷·先賢篇". It is easily available online.[6]

Pirkei Avot was translated into Chinese by Prof. Ping Zhang from Tel Aviv University and was published in 1996 by CASS Press, together with footnotes and an introduction of Rabbi Adin Steinzaltz. The so-called "another translation" is actually a revised version of Zhang's translation, with some influence from Chinese Catholic Bible.