Pity means feeling for others, particularly feelings of sadness or sorrow, and is used in a comparable sense to the more modern words "sympathy" and "empathy". Through insincere usage, it can also have a more unsympathetic connotation of feelings of superiority or condescension.[1] 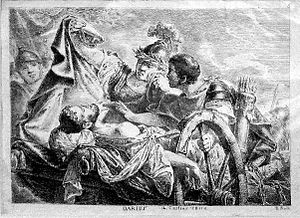 Alexander sees with a look of pity that Darius has died from his wounds. 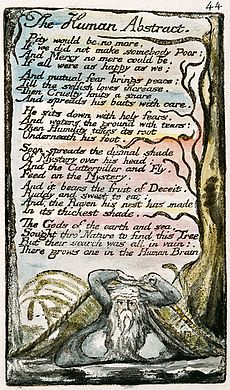 The Human Abstract, a poem in William Blake's collection Songs of Innocence and of Experience, in which he proclaims "Pity would be no more, / If we did not make somebody Poor" (1-2). This version is copy L created in 1795 and currently held by the Yale Center for British Art.[2]

The word "pity" comes from the Latin word "Pietas".

The word is often used in the translations from Ancient Greek into English of Aristotle's Poetics and Rhetoric. Aristotle argued (Rhetoric 2.8) that before a person can feel pity for another human, the person must first have experienced suffering of a similar type, and the person must also be somewhat distanced or removed from the sufferer.[3] In Aristotle's Rhetoric he defines pity as follows: "Let pity, then, be a kind of pain in the case of an apparent destructive or painful harm of one not deserving to encounter it, which one might expect oneself, or one of one's own, to suffer, and this when it seems near".[3] Aristotle also pointed out that "people pity their acquaintances, provided that they are not exceedingly close in kinship; for concerning these they are disposed as they are concerning themselves...For what is terrible is different from what is pitiable, and is expulsive of pity".[3] Thus, from Aristotle's perspective, in order to feel pity, a person must believe that the person who is suffering does not deserve their fate.[3] Developing a traditional Greek view in his work on poetry, Aristotle also defines tragedy as a kind of imitative poetry that provokes pity and fear.[4]

The religious concept of pity was reinforced in the West after the acceptance of Judeo-Christian concepts of God by the proposition of a deity which felt pity for all humanity. Consistent references to the concept of God's pity can be found in the older Jewish tradition. The Hebrew word "Hesed" translated in the LXX by "Eleos" carries the meaning roughly equivalent to pity in the sense of compassion, mercy and loving-kindness. (See The Theological Wordbook of the Old Testament, 698a.) By the nineteenth century, two different kinds of pity had come to be distinguished, which we might call "benevolent pity" and "contemptuous pity" (see Kimball). David Hume observed that pity which has in it a strong mixture of good-will, is nearly allied to contempt, which is a species of dislike, with a mixture of pride. It is an emotion that almost always results from an encounter with a real or perceived unfortunate, injured, or pathetic creature.[citation needed]

A person experiencing pity will experience a combination of intense sorrow and mercy for the person or creature, often giving the pitied some kind of aid, physical help, and/or financial assistance.[citation needed] Although pity may be confused with compassion, empathy, commiseration, condolence or sympathy, pity is different from all of these. Nietzsche pointed out that since all people to some degree value self-esteem and self-worth, pity can negatively affect any situation. Additionally, pity may actually be psychologically harmful to the pitied: Self-pity and depression can sometimes be the result of the power imbalance fostered by pity, sometimes with extremely negative psychological and psycho-social consequences for the pitied party.

Though in his later works he reverses his position and sees Pity as an emotion that can draw beings together, Mystic poet William Blake is known to have been ambivalent about the emotion Pity. In The Book of Urizen Pity begins when Los looks on the body of Urizen bound in chains (Urizen 13.50–51). However, Pity furthers the fall, "For pity divides the soul" (13.53), dividing Los and Enitharmon (Enitharmon is named Pity at her birth). Analyzers of this work assert that Blake shows that "Pity defuses the power of righteous indignation and proper prophetic wrath that lead to action. Pity is a distraction; the soul is divided between it and the action a 'pitiable' state demands. This is seen as Los's division into active male and tearful female, the latter deluding the former."[citation needed] Again railing against Pity in The Human Abstract, Blake exclaims: "Pity would be no more, / If we did not make somebody Poor" (1–2).

Modern neurology asserts that pity consists of an initial aversion to the plight of the sufferer, after which the higher parts of the brain make a more nuanced assessment of the situation (e.g., considering the context and invoking empathy, etc.).