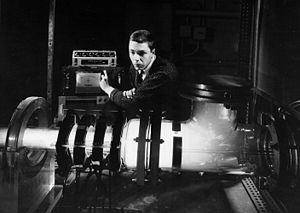 An early plasma propulsion engine from the Lewis Research Center in Cleveland, Ohio in 1961 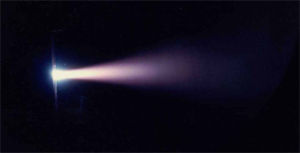 A plasma thruster during test firing 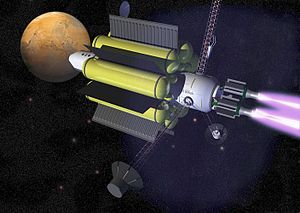 A plasma propulsion engine is a type of electric propulsion that generates thrust from a quasi-neutral plasma. This is in contrast to ion thruster engines, which generates thrust through extracting an ion current from plasma source, which is then accelerated to high velocities using grids/anodes. These exist in many forms (see electric propulsion). Plasma thrusters do not typically use high voltage grids or anodes/ cathodes to accelerate the charged particles in the plasma, but rather uses currents and potentials which are generated internally in the plasma to accelerate the plasma ions. While this results in a lower exhaust velocities by virtue of the lack of high accelerating voltages, this type of thruster has a number of interesting advantages. The lack of high voltage grids of anodes removes a possible limiting element as a result of grid ion erosion. The plasma exhaust is 'quasi- neutral', which means that ion and electrons exist in equal number, which allows simply ion- electron recombination in the exhaust to neutralise the exhaust plume, removing the need for an electron gun (hollow cathode). This type of thruster often generates the source plasma using radio frequency of microwave energy, using an external antenna. This fact, combined with the absence of hollow cathodes (which are very sensitive to all but the few noble gases) allows the intriguing possibility of being able to use this type of thruster on a huge range of propellants, from argon, to carbon dioxide, air mixtures to astronaut urine. [1]

In recent years, many agencies have developed several forms of plasma-fueled engines, including the European Space Agency, Iranian Space Agency and Australian National University, which have co-developed a more advanced type described as a double layer thruster.[3][4] However, this form of plasma engine is only one of many types.

A Helicon Double Layer Thruster uses radio waves to create a plasma and a magnetic nozzle to focus and accelerate the plasma away from the rocket engine.

A Mini-Helicon Plasma Thruster, ideal for space maneuvers, runs off of nitrogen, and the fuel has an exhaust velocity (specific impulse) 10 times that of chemical rockets.[5][6]

Magnetoplasmadynamic thrusters (MPD) uses the Lorentz force (a force resulting from the interaction between a magnetic field and an electric current) to generate thrust - The electric charge flowing through the plasma in the presence of a magnetic field causing the plasma to accelerate due to the generated magnetic force.

Hall effect thrusters combine a strong localized static magnetic field perpendicular to the electric field created between an upstream anode and a downstream cathode called neutralizer, to create a "virtual cathode" (area of high electron density) at the exit of the device. This virtual cathode then attracts the ions formed inside the thruster closer to the anode. Finally the accelerated ion beam is neutralized by some of the electrons emitted by the neutralizer.

Electrodeless plasma thrusters use the ponderomotive force which acts on any plasma or charged particle when under the influence of a strong electromagnetic energy gradient to accelerate the plasma. 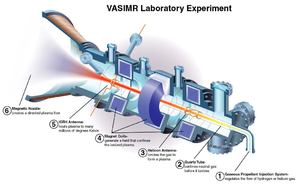 VASIMR, or Variable Specific Impulse Magnetoplasma Rocket, works by using radio waves to ionize a propellant into a plasma and then a magnetic field to accelerate the plasma out of the back of the rocket engine to generate thrust. The VASIMR is currently being developed by the private company Ad Astra Rocket Company, headquartered in Houston, TX with of help from a NS Canada based company Nautel, producing the 200 kW RF generators for ionizing propellant. Some of the components and "Plasma Shoots" experiments are tested in a laboratory settled in Liberia, Costa Rica. This project is led by former NASA astronaut Dr. Franklin Chang-Díaz (CRC-USA). Recently the Costa Rican Aerospace Alliance announced its cooperation with this project by developing an exterior support device for the VASIMR to be fitted in the exterior of the International Space Station, as part of the plan to test the VASIMR in space, this test phase is now expected to be conducted in 2016. The supposed 200 megawatt engine could reduce the duration of flight from Earth to Jupiter or Saturn from six years to fourteen months, and Mars from 6 months to 39 days.[7]