When discussing weapons in science fiction, a plasma weapon is a type of raygun that fires a stream, bolt(s), pulse or toroid of plasma (i.e. very hot, very energetic excited matter). The primary damage mechanism of these fictional weapons is usually thermal transfer; it typically causes serious burns, and often immediate death of living creatures, and melts or evaporates other materials. In certain fiction, plasma weapons may also have a significant kinetic energy component, that is to say the ionized material is projected with sufficient momentum to cause some secondary impact damage in addition to causing high thermal damage. In some fictions, like Star Wars, plasma is highly effective against mechanical targets such as droids. The ionized gas disrupts their systems.

Fictional plasma weapons are often visually analogous to real-life plasma torches that cut into materials for industrial use purposes; however, said torches currently only produce a plasma jet of several inches at most.

Plasma weapons are often, especially in video games, depicted as very powerful, but short-ranged and/or less energy-efficient than other weapon types. 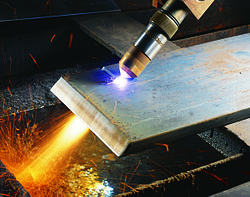 Close up of a Hypertherm HyPerformance plasma torch cutting metal.

Currently, there are several real tools that are somewhat related to fictional plasma weapons: