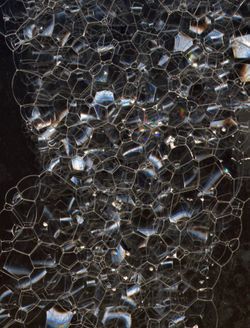 Bubbles in a foam of soapy water obey Plateau's laws. At every vertex the angle is close to 109.47 degrees, the tetrahedral angle

Plateau's laws describe the structure of soap films. These laws were formulated in the 19th century by the Belgian physicist Joseph Plateau from his experimental observations. Many patterns in nature are based on foams obeying these laws.[1]

Plateau's laws describe the shape and configuration of soap films as follows:[2]

Configurations other than those of Plateau's laws are unstable, and the film will quickly tend to rearrange itself to conform to these laws.[3]