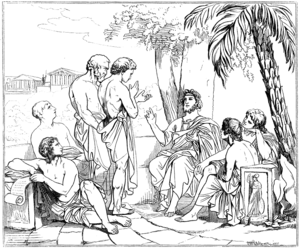 Plato and his students

Platonic love is a type of love that is celibate and non-sexual. The term is named after Plato, who was the first to describe this kind of love. Platonic love in this original sense of the term is examined in Plato's dialogue the Symposium, which has as its topic the subject of love or Eros generally. It explains the possibilities of how the feeling of love began and how it has evolved—both sexually and non-sexually. Of particular importance is the speech of Socrates, relating the idea of platonic love as attributed to the prophetess Diotima, which presents it as a means of ascent to contemplation of the divine. For Diotima, and for Plato generally, the most correct use of love of other human beings is to direct one's mind to love of divinity.

In short, with genuine platonic love, the beautiful or lovely other person inspires the mind and the soul and directs one's attention to spiritual things. Socrates, in Plato's "Symposium", explained two types of love or Eros—Vulgar Eros or earthly love and Divine Eros or divine love. Vulgar Eros is nothing but mere material attraction towards a beautiful body for physical pleasure and reproduction. Divine Eros begins the journey from physical attraction i.e. attraction towards beautiful form or body but transcends gradually to love for Supreme Beauty. This concept of Divine Eros is later transformed into the term Platonic love. This term also exists in Sufism although the word used to define it is often taken as Ishq-e-Haqeeqi.

In Middle Ages arose a new interest in Plato, his philosophy and his view of love. This was caused by Georgios Gemistos Plethon during the Councils of Ferrara and Firenze in 1438-1439. Later in 1469 Marsilio Ficino put forward a theory of neo-platonic love in which he defines love as a personal ability of an individual which guides their soul towards cosmic processes and lofty spiritual goals and heavenly ideas. (De Amore, Les Belles Lettres, 2012.)

The English term dates back to William Davenant's The Platonic Lovers (performed in 1635); a critique of the philosophy of platonic love which was popular at Charles I's court. It is derived from the concept in Plato's Symposium of the love of the idea of good which lies at the root of all virtue and truth. For a brief period, Platonic love was a fashionable subject at the English royal court, especially in the circle around Queen Henrietta Maria, the wife of King Charles I. Platonic love was the theme of some of the courtly masques performed in the Caroline era—though the fashion soon waned under pressures of social and political change.