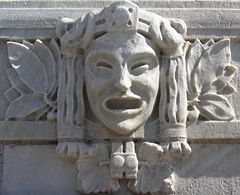 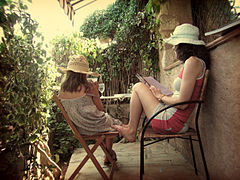 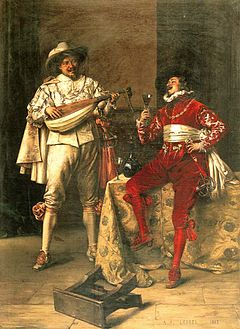 Pleasure describes the broad class of mental states that humans and other animals experience as positive, enjoyable, or worth seeking. It includes more specific mental states such as happiness, entertainment, enjoyment, ecstasy, and euphoria. The early psychological account of pleasure, the pleasure principle, describes it as a positive feedback mechanism, motivating the organism to recreate in the future the situation which it has just found pleasurable and to avoid situations that have caused pain in the past.[1]

Studies of the brain structures involved in the experience of pleasure suggest that there are two distinct kinds of pleasure: liking and wanting.[2]

The pleasure center is the set of brain structures, predominantly the nucleus accumbens, theorized to produce great pleasure when stimulated electrically. Some references state that the septum pellucidium is generally considered to be the pleasure center,[3] while others mention the hypothalamus when referring to the pleasure center for intracranial stimulation. the experience of pleasure that can also be consciously reported has been linked to activation in the orbitofrontal cortex, the anterior cingulate cortex and the insula, while activity in different brain regions, such as the nucleus accumbens, is associated with pleasure unconsciously expressed.[4]

In recent years, the brain mechanisms underlying pleasure have been described in more detail, at least in rats.[5] One particularly active research group around Kent C. Berridge has shown that pleasure is not a unitary experience. Rather, pleasure consists of multiple brain processes including liking, wanting and learning subserved by distinct yet partially overlapping brain networks.[2] In particular, this research has been helped by the use of objective pleasure-elicited reactions in humans and other animals such as the behavioral ‘liking’/‘disliking’ facial expressions to tastes that are homologous between humans and many other mammals.[6]

Recreational drug use can be pleasurable: some drugs, illicit and otherwise, directly create euphoria in the human brain when ingested. The mind's natural tendency to seek out more of this feeling (as described by the pleasure principle) can lead to dependence and addiction. Berridge and Robinson have proposed that addiction results from drugs hijacking the ‘wanting’ system through a sensitization of the mesolimbic dopamine system.[7][8]

Certain chemicals are known to stimulate the pleasure centers of the brain.[citation needed] It has been suggested that physical exertion can release endorphins in what is called the runner's high, and equally it has been found that chocolate and certain spices, such as from the family of the chilli, can release or cause to be released similar psychoactive chemicals to those released during sexual acts.[citation needed]

Pleasure is considered to be one of the core dimensions of emotion. It can be described as the positive evaluation that forms the basis for several more elaborate evaluations such as "agreeable" or "nice". As such, pleasure is an affect and not an emotion, as it forms one component of several different emotions.[9]

Pleasure is sometimes subdivided into fundamental pleasures that are closely related to survival (food, sex, and social belonging) and higher-order pleasures (e.g., art, money, and altruism).[10]

Pleasure is often regarded as a bipolar construct, meaning that the two ends of the spectrum from pleasant to unpleasant are mutually exclusive. This view is e.g. inherent in the circumplex model of affect.[11] Yet, some lines of research suggest that people do experience pleasant and unpleasant feelings at the same time, giving rise to so-called mixed feelings.[12][13][14]

The clinical condition of being unable to experience pleasure from usually enjoyable activities is called anhedonia.

The degree to which something or someone is experienced as pleasurable not only depends on its objective attributes (appearance, sound, taste, texture, etc.), but on beliefs about its history, about the circumstances of its creation, about its rarity, fame, or price, and on other non-intrinsic attributes, such as the social status or identity it conveys. For example, a sweater that has been worn by a celebrity will be more desired than an otherwise identical sweater that has not, though considerably less so if it has been washed.[15] Another example was when Grammy-winning, internationally acclaimed violinist Joshua Bell played in the Washington D.C. subway for 43 minutes, attracting little attention from the 1,097 people who passed by, and earning about $59 in tips.[15][16][17] Paul Bloom describes these phenomena as arising from a form of essentialism.

Some people find things pleasurable which have adverse objective attributes, such as horror films and spicy food.

Epicurus and his followers defined the highest pleasure as the absence of suffering[18] and pleasure itself as "freedom from pain in the body and freedom from turmoil in the soul".[19] According to Cicero (or rather his character Torquatus) Epicurus also believed that pleasure was the chief good and pain the chief evil.[20]

In the 12th century Razi's "Treatise of the Self and the Spirit" (Kitab al Nafs Wa’l Ruh) analyzed different types of pleasure, sensuous and intellectual, and explained their relations with one another. He concludes that human needs and desires are endless, and "their satisfaction is by definition impossible."[21]

The 19th-century German philosopher Arthur Schopenhauer understood pleasure as a negative sensation, one that negates the usual existential condition of suffering.[22]

Utilitarianism and Hedonism are philosophies that advocate increasing to the maximum the amount of pleasure and minimizing the amount of suffering.

As a uniquely human experience

There has been debate as to whether pleasure is experienced by other animals rather than being an exclusive property of humankind. Jeremy Bentham (usually regarded as the founder of Utilitarianism)[23] and Beth Dixon[24] both argue that animals do experience pleasure — the latter, however, in a carefully worded manner. People who believe in human exceptionalism might argue that it is a form of anthropomorphism to ascribe any human experience to animals, including pleasure. Others view animal behaviour simply as responses to stimuli; this is the way behaviourists look at the evidence, Pavlov's dogs (or rather his explanation of their behaviour) being the best-known example. However, it may be argued that we simply cannot know whether animals experience pleasure, and most scientists, indeed, prefer to remain neutral while using anthropomorphisms when needed.[25] It appears, though, that those who recognise emotions in other animals are in the ascent: many ethologists, for example Marc Bekoff, are prepared to draw the conclusion that animals do experience emotions, though these are not necessarily the same as human emotions.[26]