From Infogalactic: the planetary knowledge core
Jump to: navigation, search
For other uses, see Poet (disambiguation).
"Poetess" redirects here. For the American rapper, see The Poetess.

A poet is a person who writes poetry. Poets may describe themselves as such or be described as poets by others. A poet may simply be a writer of poetry, or may perform their art to an audience. 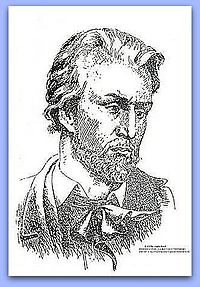 Postmortal fictional portrait of Slovak poet Janko Kráľ (1822-1876) - an idealized romanticized picture of "how a real poet should look like" in Western culture. 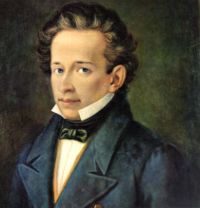 The Italian Giacomo Leopardi, one of the most radical and challenging thinkers of the 19th century.[1]

The work of a poet is essentially one of communication, either expressing ideas in a literal sense, such as writing about a specific event or place, or metaphorically. Poets have existed since antiquity, in nearly all languages, and have produced works that vary greatly in different cultures and time periods.[2] Throughout each civilization and language, poets have used various styles that have changed through the course of literary history, resulting in a history of poets as diverse as the literature they have produced.

In Ancient Rome, professional poets were generally sponsored by patrons, wealthy supporters including nobility and military officials.[3] For instance, Gaius Cilnius Maecenas, friend to Caesar Augustus, was an important patron for the Augustan poets, including both Horace and Virgil.

Poets held an important position in pre-Islamic Arabic society with the poet or sha'ir filling the role of historian, soothsayer and propagandist. Words in praise of the tribe (qit'ah) and lampoons denigrating other tribes (hija') seem to have been some of the most popular forms of early poetry. The sha'ir represented an individual tribe's prestige and importance in the Arabian peninsula, and mock battles in poetry or zajal would stand in lieu of real wars. 'Ukaz, a market town not far from Mecca, would play host to a regular poetry festival where the craft of the sha'irs would be exhibited.

In the High Middle Ages, troubadors were an important class of poets and came from a variety of backgrounds. They lived and travelled in many different places and were looked upon as actors or musicians as much as poets. They were often under patronage, but many travelled extensively.

The Renaissance period saw a continuation of patronage of poets by royalty. Many poets, however, had other sources of income, including Italians like Dante Aligheri, Giovanni Boccaccio and Petrarch's works in a pharmacist's guild and William Shakespeare's work in the theater.

In the Romantic period and onwards, many poets were independent writers who made their living through their work, often supplemented by income from other occupations or from family.[4] This included poets such as William Wordsworth and Robert Burns.

Poets such as Virgil in the Aeneid and John Milton in Paradise Lost invoked the aid of a Muse.

Poets of earlier times were often well read and highly educated people while others were to a large extent self educated. A few poets such as John Gower and John Milton were able to write poetry in more than one language.

Many universities offer degrees in creative writing though these only came into existence in the 20th century. While these courses are not necessary for a career as a poet, they can be helpful as training, and for giving the student several years of time focused on their writing.[5]