In it, Aristotle offers an account of what he calls "poetry" (a term which in Greek literally means "making" and in this context includes drama—comedy, tragedy, and the satyr play—as well as lyric poetry and epic poetry). They are similar in the fact that they are all imitations but different in the three ways that Aristotle describes:

In examining its "first principles", Aristotle finds two: 1) imitation and 2) genres and other concepts by which that of truth is applied/revealed in the poesis. His analysis of tragedy constitutes the core of the discussion.[4] Although Aristotle's Poetics is universally acknowledged in the Western critical tradition, "almost every detail about his seminal work has aroused divergent opinions".[5]

The work was lost to the Western world for a long time. It was available in the Middle Ages and early Renaissance only through a Latin translation of an Arabic version written by Averroes.[6]

Aristotle's work on aesthetics consists of the Poetics and Rhetoric.[7][8] The Poetics is specifically concerned with drama. At some point, Aristotle's original work was divided in two, each "book" written on a separate roll of papyrus.[9] Only the first part–that which focuses on tragedy–survives. The lost second part addressed comedy.[9] Some scholars speculate that the Tractatus coislinianus summarises the contents of the lost second book.[10]

The table of contents page of the Poetics found in Modern Library's Basic Works of Aristotle (2001) identifies five basic parts within it.[11]

Aristotle distinguishes between the genres of "poetry" in three ways:

language, rhythm, and melody, for Aristotle, make up the matter of poetic creation. Where the epic poem makes use of language alone, the playing of the lyre involves rhythm and melody. Some poetic forms include a blending of all materials; for example, Greek tragic drama included a singing chorus, and so music and language were all part of the performance.

Also "agents" in some translations. Aristotle differentiates between tragedy and comedy throughout the work by distinguishing between the nature of the human characters that populate either form. Aristotle finds that tragedy treats of serious, important, and virtuous people. Comedy, on the other hand, treats of less virtuous people and focuses on human "weaknesses and foibles".[12] Aristotle introduces here the influential tripartite division of characters in superior (βελτίονας) to the audience, inferior (χείρονας), or at the same level (τοιούτους).[13][14][15]

One may imitate the agents through use of a narrator throughout, or only occasionally (using direct speech in parts and a narrator in parts, as Homer does), or only through direct speech (without a narrator), using actors to speak the lines directly. This latter is the method of tragedy (and comedy): without use of any narrator.

Having examined briefly the field of "poetry" in general, Aristotle proceeds to his definition of tragedy:

Tragedy is a representation of a serious, complete action which has magnitude, in embellished speech, with each of its elements [used] separately in the [various] parts [of the play] and [represented] by people acting and not by narration, accomplishing by means of pity and terror the catharsis of such emotions.

By "embellished speech", I mean that which has rhythm and melody, i.e. song. By "with its elements separately", I mean that some [parts of it] are accomplished only by means of spoken verses, and others again by means of song (1449b25-30).[16]

He then identifies the "parts" of tragedy:

Refers to the "structure of incidents" (actions). Key elements of the plot are reversals, recognition, and suffering. The best plot should be "complex" (i.e. involve a change of fortune). It should imitate actions arousing fear and pity. Thus it should proceed from good fortune to bad and involve a high degree of suffering for the protagonist, usually involving physical harm or death.

Actions should be logical and follow naturally from actions that precede them. They will be more satisfying to the audience if they come about by surprise or seeming coincidence and are only afterward seen as plausible, even necessary.

When a character is unfortunate by reversal(s) of fortune (peripeteia known today in pop culture as a plot twist), at first he suffers (pathos) and then he can realize (anagnorisis) the cause of his misery or a way to be released from the misery.

It is much better if a tragical accident happens to a hero because of a mistake he makes (hamartia) instead of things that might happen anyway. That is because the audience is more likely to be "moved" by it. A hero may have made it knowingly (in Medea) or unknowingly (Oedipus). A hero may leave a deed undone (due to timely discovery, knowledge present at the point of doing deed). Character is the moral or ethical character in tragic play. In a perfect tragedy, the character will support the plot, which means personal motivations will somehow connect parts of the cause-and-effect chain of actions producing pity and fear.
Main character should be

Refers to the quality of speech in tragedy. Speeches should reflect character, the moral qualities of those on the stage. The expression of the meaning of the words.

The Chorus too should be regarded as one of the actors. It should be an integral part of the whole, and share in the action. Should be contributed to the unity of the plot. It is a very real factor in the pleasure of the drama.

Refers to the visual apparatus of the play, including set, costumes and props (anything you can see). Aristotle calls spectacle the "least artistic" element of tragedy, and the "least connected with the work of the poet (playwright). For example: if the play has "beautiful" costumes and "bad" acting and "bad" story, there is "something wrong" with it. Even though that "beauty" may save the play it is "not a nice thing". Spectacle is like a suspenseful horror film.

He offers the earliest-surviving explanation for the origins of tragedy and comedy: 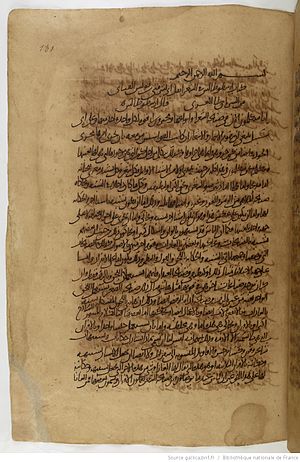 Arabic translation of the Poetics by Abū Bishr Mattā.

The Arabic version of Aristotle’s Poetics that influenced the Middle Ages was translated from a Greek manuscript dated to sometime prior to the year 700. This manuscript was translated from Greek to Syriac and is independent of the currently-accepted 11th-century source designated Paris 1741. The Syriac language source used for the Arabic translations departed widely in vocabulary from the original Poetics and it initiated a misinterpretation of Aristotelian thought that continued through the Middle Ages.[18] Paris 1741 today can be found online at the Bibliothèque nationale de France (National Library of France).[19]

Arabic scholars who published significant commentaries on Aristotle’s Poetics included Avicenna, Al-Farabi and Averroes.[20] Many of these interpretations sought to use Aristotelian theory to impose morality on the Arabic poetic tradition.[21] In particular, Averroes added a moral dimension to the Poetics by interpreting tragedy as the art of praise and comedy as the art of blame.[22] Averroes' interpretation of the Poetics was accepted by the West, where it reflected the "prevailing notions of poetry" into the 16th century.[23]

The Poetics—both the extant first book and the lost second book—figure prominently in Umberto Eco's novel The Name of the Rose.