From Infogalactic: the planetary knowledge core
(Redirected from Police of the Russian Federation)
Jump to: navigation, search 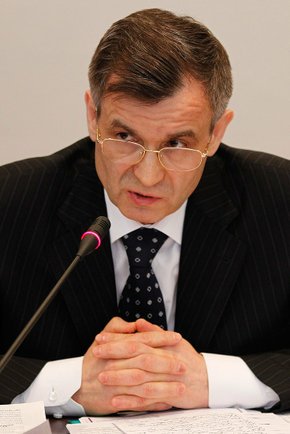 Rashid Nurgaliyev, former Russian Minister for Internal Affairs (2003-2012), who led the dissolution of the Militsiya. 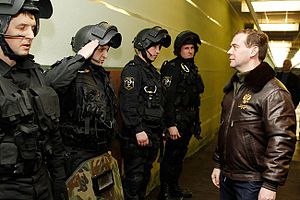 The police (Russian: полиция, tr. politsiya; IPA: [pɐˈlʲitsɨjə]) is the federal law-enforcement agency in Russia, operating under the Ministry of Internal Affairs. It was established in 2011, replacing the militsiya, the former police service. It is the federal police service of Russia operates according to the Law on police (Закон "о полиции"),[2] as approved by the Federal Assembly and subsequently signed into law on February 7, 2011 by the then President of the Russian Federation, Dmitry Medvedev. 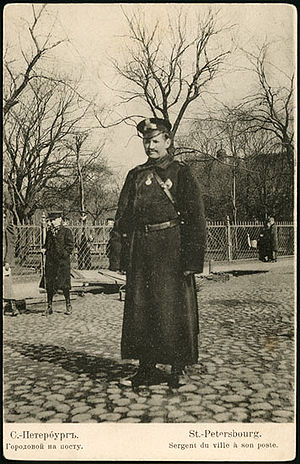 The police force in Saint Petersburg was established as the Main Police on June 7, 1718 by decree from Peter the Great. Anton de Vieira was appointed as the first General Polizmeister.

On January 19, 1722 the Governing Senate established the Moscow Police. The Detective Department was founded in 1866 operating under the Police Department of MVD, and by 1907 similar departments had been created in other major cities of the Russian Empire, including Moscow, Kiev, Riga, Odessa, Tiflis, Baku and Rostov-on-Don. Other districts were policed by rural police or gendarmerie units.

The 3,500 strong police force of Saint Petersburg provided the main opposition to the rioting which marked the initial outbreak of the February Revolution. After the army units garrisoning the city defected, the police became the main target of the revolutionaries and a number were killed. The Police of the Russian Empire was dissolved on March 10, 1917, and on April 17 the Provisional Government established the People's Militia (Militsiya) as a new law enforcement body.

Russian police reform (Закон РФ "о полиции" (Zakon RF "O politsii" {Law on police}) is an ongoing effort initiated by former President Dmitry Medvedev to improve the efficiency of Russia's police forces, decrease corruption and improve the public image of law enforcement. On 7 February 2011, amendments were made to laws on the police force, the criminal code and the criminal procedure code. The amendments came into force on 1 March 2011. These changes stipulate a personnel cut of 20% in law enforcement, a renaming of Russian law enforcers from "militsiya" (militia) to "politsiya" (police), substantial increases in wages, centralization of financing, and several other changes. Around 217 billion rubles ($7 billion) have been allocated from the federal budget to finance the reform.

Main changes and aims of the reform 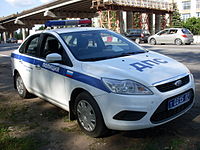 Russian police use a number of different models of automobiles which range greatly in age and technical specification.

The Russian Police do not use the rank of Corporal. There is the rank of Junior sergeant instead.

It should also be noted that there is a 4 star police rank, General of the Police of the Russian Federation, (Генерал полиции Российской Федерации). The rank is only newly established.