Police state is a term denoting a government that exercises power arbitrarily through the power of the police force. Originally the term designated a state regulated by a civil administration, but since the beginning of the 20th century, the term has "taken on an emotional and derogatory meaning" by describing an undesirable state of living characterized by the overbearing presence of the civil authorities.[1]

The inhabitants of a police state may experience restrictions on their mobility, or on their freedom to express or communicate political or other views, which are subject to police monitoring or enforcement. Political control may be exerted by means of a secret police force which operates outside the boundaries normally imposed by a constitutional state.[2] Robert von Mohl, who first introduced the rule of law to German jurisprudence, contrasted the Rechtsstaat ("legal" or "constitutional" state) with the anti-aristocratic Polizeistaat ("police state").[3]

The Oxford English Dictionary traces the phrase "police State" back to 1851, when it was used in reference to the use of a national police force to maintain order, in Austria.[4] The German term Polizeistaat came into English usage in the 1930s with reference to totalitarian governments that had begun to emerge in Europe.[5]

220px
Inner German border system in the early 1960s. Police states can be difficult to leave. 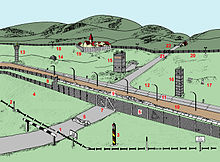 Because there are different political perspectives as to what an appropriate balance is between individual freedom and national security, there are no objective standards defining a police state. This concept can be viewed as a balance or scale. Along this spectrum, any law which has the effect of removing liberty is seen as moving towards a police state, while any law that limits government oversight is seen as moving towards a free state.[6]

An electronic police state is one in which the government aggressively uses electronic technologies to record, organize, search, and distribute forensic evidence against its citizens.[7][8]

Examples of states with related attributes

The Soviet Union and its many satellite states, including East Germany and those that were part of the Soviet bloc, had extensive and repressive police and intelligence services (such as the KGB); approximately 2.5% of the East German adult population served as informants for the Stasi.[9]

Nazi Germany was brought into being through a nominal democracy, yet gradually exerted more and more repressive controls over its people in the lead-up to World War II. In addition to the SS and the Gestapo, the Nazi police state used the judiciary to assert control over the population from the 1930s until the end of the war.[10]

During the period of Apartheid, the South African government maintained police state attributes such as banning people and organizations, arresting political prisoners, and maintaining segregated living communities and restricting movement and access.[11]

The Republic of Cuba, under president (and later nationalist dictator) Fulgencio Batista, was an authoritarian police state during his rule and continued following his overthrow during the Cuban Revolution in 1959, with the rise to power of Fidel Castro and his communist regime.[14][15][16][17]

The region of North Korea has long had elements of a police state, from the Juche -style Silla kingdom,[18] to the imposition of a fascist police state by the Japanese,[18] to the police state imposed and maintained by the Kim family.[19] Paris-based Reporters Without Borders has ranked North Korea last or second last in their test of press freedom since the index's introduction, stating that the ruling Kim family control all of the media.[20][21]

In response to government proposals to enact new security measures to curb protests, government of AK Party has been accused of turning Turkey into a police state.[22][unreliable source?]

Following the 2013 Egyptian coup d'état, the military government of Egypt has taken dramatic steps to crack down on freedom of religion and expression, leading to accusations that it has effectively become the world's newest Police State.[23][24]

Fictional police states have been featured in a number of media ranging from novels to films to video games. George Orwell's 1984 has been described as "the definitive fictional treatment of a police state, which has also influenced contemporary usage of the term".[25]