The Polikarpov Po-2 (also U-2) served as a general-purpose Soviet biplane, nicknamed Kukuruznik (Russian: Кукурузник, from Russian "kukuruza" (кукуруза) for maize; thus, "maize duster" or "crop duster"), NATO reporting name "Mule".[N 1] The reliable, uncomplicated concept of the Po-2's design made it an ideal training aircraft, as well as doubling as a low-cost ground attack, aerial reconnaissance, psychological warfare and liaison aircraft during war, proved to be one of the most versatile light combat types to be built in the Soviet Union.[3] As of 1978 it remained in production for a longer period of time than any other Soviet-era aircraft.[3]

It is one of the most produced aircraft, and may be the most produced biplane with production possibly as high as 30,000 Po-2s built between 1928 and 1959.[citation needed] However, production figures for Polikarpov U-2 and Po-2 bombers and trainers combined are between 20,000 and 30,000.[2] with production ending as early as 1952.[2] Correct figures are hard to come by since low-rate production by small repair shops and air clubs likely continued until 1959.[4]

The aircraft was designed by Nikolai Polikarpov to replace the U-1 trainer (a copy of the British Avro 504), itself known as Avrushka to the Soviets. Its name was changed to Po-2 in 1944, after Polikarpov's death, according to the new Soviet naming system, usually using the first two letters of the designer's family name, or the design bureau that created it.

The prototype of the U-2, powered by a 74 kW (99 hp) Shvetsov M-11 air-cooled five cylinder radial engine, first flew on 7 January 1928 piloted by M.M. Gromov. Aircraft from the pre-production series were tested at the end of 1928 and serial production started in 1929 in Factory number 23 in Leningrad. Production in the Soviet Union ended in 1953, but license-built CSS-13 were still produced in Poland until 1959. 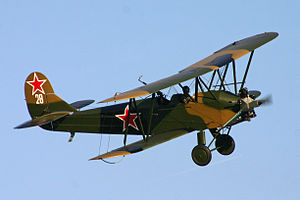 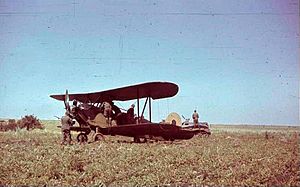 A damaged and abandoned Po-2 forced to land in Ukraine, and subsequently captured by German troops, 1941.

From the beginning, the U-2 became the basic Soviet civil and military trainer aircraft, mass-produced in a "Red Flyer" factory near Moscow. It was also used for transport, and as a military liaison aircraft, due to its STOL capabilities. Also from the beginning it was produced in an agricultural aircraft variant, what earned it its nickname Kukuruznik. Although entirely outclassed by contemporary aircraft, the Kukuruznik served extensively on the Eastern Front in World War II, primarily as a liaison, medevac and general supply aircraft. It was especially useful for supplying Soviet partisans behind the front line. Manufacturing of the Po-2 in the USSR ceased in 1949, but until 1959 a number were assembled in Aeroflot repair workshops.

The first trials of arming the aircraft with bombs took place in 1941.

During the defence of Odessa, in September 1941, the U-2 was used as a reconnaissance aircraft and as a light, short-range, bomber. The bombs, dropped from a civil aircraft piloted by Pyotr Bevz, were the first to fall on enemy artillery positions.[5] From 1942 it was adapted as a light night ground attack aircraft.

Nikolay Polikarpov supported the project, and under his leadership, the U-2VS (voyskovaya seriya - Military series) was created. This was a light night bomber, fitted with bomb carriers beneath the lower wing, to carry 50 or 100 kg (110 or 220 lbs) bombs up to a total weight of 350 kg (771 lb) and armed with ShKAS or DA machine guns in the observer's cockpit.[5]

Wehrmacht troops nicknamed it Nähmaschine (sewing machine) for its rattling sound and Finnish troops called it Hermosaha (Nerve saw)[citation needed] as the Soviets flew nocturnal missions at low altitudes: the engine had a very peculiar sound, which was described as nerve-wracking, therefore the name. Luftwaffe pilots were soon given special instructions for engaging these aircraft. The material effects of these missions may be regarded as minor, but the psychological effect on German troops was noticeable. They typically attacked by surprise in the middle of the night, denying German troops sleep and keeping them on their guard, contributing to the already high stress of combat on the Eastern front. The usual tactic involved flying only a few meters above the ground, rising for the final approach, throttling back the engine and making a gliding bombing run, leaving the targeted troops with only the eerie whistling of the wind in the wings' bracing-wires as an indication of the impending attack. Luftwaffe fighters found it extremely hard to shoot down the Kukuruznik because of two main factors: the pilots flew at treetop level where they were hard to see or engage and the stall speed of both the Messerschmitt Bf 109 and the Focke-Wulf Fw 190 was similar to the U-2s maximum speed, making it difficult for the fighters to keep a Po-2 in weapons range for an adequate period of time.[6] The success of the Soviet night harassment units inspired the Luftwaffe to set up similar Störkampfstaffel "harassment combat squadrons" on the Eastern Front using their own obsolete 1930s-era, open cockpit biplane and parasol monoplane aircraft, eventually building up to larger Nachtschlachtgruppe (night attack group) units of a few squadrons each.

The U-2 became known as the aircraft used by the 588th Night Bomber Regiment, composed of an all-women pilot and ground crew complement. The unit was notorious for daring low-altitude night raids on German rear-area positions. Veteran pilots Yekaterina Ryabova and Nadezhda Popova on one occasion flew eighteen missions in a single night. The women pilots observed that the enemy suffered a further degree of demoralization simply due to their antagonists being female. As such, the pilots earned the nickname "Night Witches" (German Nachthexen, Russian Ночные Ведьмы/Nočnye Ved’my). The unit earned numerous Hero of the Soviet Union citations and dozens of Order of the Red Banner medals; most surviving pilots had flown nearly 1,000 combat missions by the end of the war and took part in the Battle of Berlin.

The Polish Air Force used these slow and manoeuvrable aircraft for air reconnaissance and COIN operations against UPA bands in mountainous area of Bieszczady. Pilots and navigators were dispatched to look for concentrations of UPA forces and if needed, engage them with machine guns and grenades. On several occasions, the UPA managed to bring down some of the Po-2s, but never captured or operated them.[7]

North Korean forces used the Po-2 in a similar role during the Korean War. A significant number of Po-2s were fielded by the Korean People's Air Force, inflicting serious damage during night raids on United Nations bases.[8] During one such attack, a lone Po-2 attacked Pyongyang airfield in northwestern Korea. Concentrating on the 8th Fighter-Bomber Group's parking ramp, the Po-2 dropped a string of fragmentation bombs squarely across the group's lineup of P-51 Mustangs. Eleven Mustangs were damaged, three so badly that they were destroyed when Pyongyang was abandoned several days later.

On 17 June 1951, at 01:30 hours, Suwon Air Base was bombed by two Po-2s. Each biplane dropped a pair of fragmentation bombs. One scored a hit on the 802nd Engineer Aviation Battalion's motor pool, damaging some equipment. Two bombs burst on the flight line of the 335th Fighter Interceptor Squadron. One F-86A Sabre (FU-334 / 49-1334) was struck on the wing and began burning. The fire took hold, gutting the aircraft. Prompt action by personnel who moved aircraft away from the burning Sabre preventing further loss. Yet eight other Sabres had been damaged in the brief attack, four seriously. One F-86 pilot was among the wounded. The North Koreans subsequently credited Lt. La Woon Yung with this damaging attack.[9]

UN forces named the Po-2's nighttime appearance Bedcheck Charlie and had great difficulty in shooting it down — even though night fighters had radar as standard equipment in the 1950s, the wood-and-fabric-construction of the Po-2 gave only a minimal radar echo, making it hard for an opposing fighter pilot to acquire his target. As Korean war U.S. veteran Leo Fournier remarked about "Bedcheck Charlie" in his memoirs: "... no one could get at him. He just flew too low and too slow." On 16 June 1953, a USMC AD-4 from VMC-1 piloted by Major George H. Linnemeier and CWO Vernon S. Kramer shot down a Soviet-built Polikarpov Po-2 biplane, the only documented Skyraider air victory of the war. The Po-2 is also the only biplane, who credited a documented jet-kill as one Lockheed F-94 Starfire was lost while slowing down to 110 mph – below its stall speed – during an intercept in order to engage the low flying Po-2.[10] 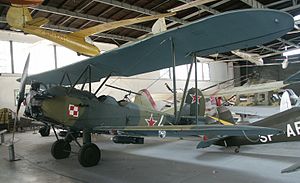 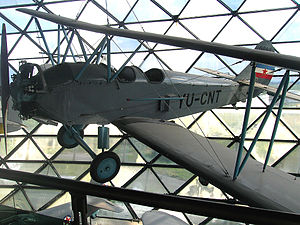 Po-2 with a female crew is featured in the iconic Soviet war drama Only Old Men Are Going to Battle about World War II fighter pilots. Although outdated biplane itself is a source of many jokes from La-5 pilots, they greatly admire courage of young women fighting Nazis on a par with male soldiers.

Piloted by the fictional Ludmila Gorbunova, the Po-2 is featured (as the U-2) in the Harry Turtledove alternate history series Worldwar as one of the few examples of human machinery that has managed to evade destruction from a technologically superior invading alien force. Because of the Po-2's wooden construction, low altitude, and slow speed, the aliens have an extremely hard time detecting it or shooting it down. 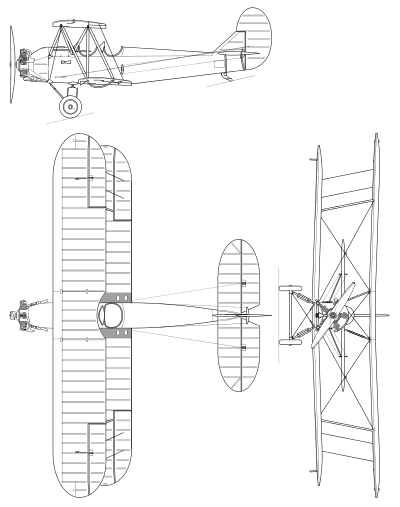